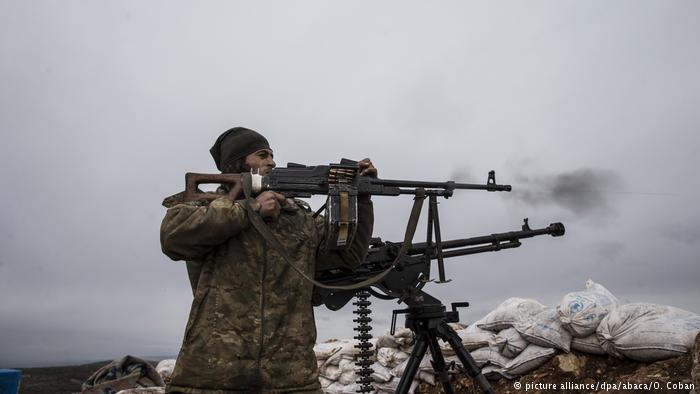 Turkey says its military forces have crossed into Syria’s Kurdish enclave of Afrin, as Ankara launched on Saturday an air assault to take the area held by the US-backed Kurdish People’s Protection Units (YPG).

At a news conference in Istanbul, he said that Turkey’s military aimed to create a security zone some 30 kilometres inside the war-ravaged country.

The state-run Anadolu Agency also reported the arrival of Turkish forces in the enclave as part of an operation codenamed Olive Branch, adding that the airstrikes and artillery shelling that targeted the area, which began on Saturday, were continuing.

The YPG is comprised of Kurdish militias fighting against Syrian President Bashar Al-Assad and Islamic State group (IS) factions in the country. Many foreigners have volunteered with the YGP to fight against the Syrian regime and IS.

On Sunday, US Secretary of Defence James Mattis said that Turkey notified the United States ahead of its airstrikes against the US-backed Kurdish forces, adding that Washington is in contact with Ankara about future operations.

Reuters reported that the operation “pits Turkey against the Kurdish fighters allied with the United States at a time when ties between Ankara and Washington—within the North Atlantic Treaty Organisation alliance bound together as a coalition against the Islamic State—appear dangerously close to a breaking point.”

Turkish President Recep Tayyip Erdogan said he hoped the offensive would be completed in “a very short time.”

Turkey’s claims were immediately denied by a YPG spokesperson, who said Turkish forces and their rebels tried to cross into the province but failed, after fierce clashes erupted.

The Britain-based Syrian Observatory for Human Rights (SOHR) reported fighting between the two sides on the northern and western edges of Afrin, but said that Turkish troops had failed to advance.

Although Ankara has not released figures on the number of Turkish troops involved in the offensive, SOHR Director Rami Abdurrahman said some 10,000 Syrian fighters have been readied. A rebel commander quoted by Reuters on Sunday said that around 25,000 Free Syrian Army rebels would also back Turkey in its campaign to recapture YPG-held towns and villages.

The apparent ground assault comes a day after Turkey launched an air strike against the Syrian-Kurdish YPG, which controls the north-western corner of Syria, and which Ankara regards as a terror group linked to the more than three-decade insurgency in its south-east.

Turkey’s pro-Kurdish Peoples’ Democratic Party (HDP) has called on Kurds in Turkey to protest the military incursion. However, President Erdogan warned Sunday at a congress of his ruling Justice and Development Party that anyone who takes to the streets would “pay a high price.”

Saturday’s airstrikes and artillery fire were backed by pro-Turkey Syrian rebels who were engaged in a “comprehensive” ground operation against the YPG, Anadolu reported.

The SOHR said six civilians, including a child, were killed in the strikes on Afrin.

Early on Sunday, four suspected YPG rockets struck the central-southern Turkish town of Kilis from across the Syrian border, the town’s governor said.

A missile also hit the Turkish border town of Reyhanli, killing one person and wounding more than 30, the town’s mayor told broadcaster NTV.

While Erdogan has vowed to crush Kurdish militia, the YPG is the major force within the US-backed Syrian Democratic Forces alliance, leading the fight against IS in Syria.

Syrian President Bashar Al-Assad on Sunday condemned the Turkish offensive, saying it was supporting “terrorists”—a term the Syrian regime often uses to describe opposition forces in the country. The Syrian government warned last week that it could shoot down any Turkish warplanes participating in any assault.

Ankara’s decision to launch operation Olive Branch has sunk US-Turkey ties to new lows and forced other nations to urge an immediate end to the offensive.

In August 2016, Turkey launched a new effort to back rebels in northern Syria. More tanks crossed into the war-torn country to help opposition fighters battling IS.

Turkey increased its military presence in Syria, sending tanks into the Cobanbey town in Aleppo to back opposition fighters combating IS. In the same year, Ankara launched “Euphrates Shield,” its first cross-border operation since the start of Syria’s civil war.

Although the move was seen as an attempt to help members of the Western-backed Free Syrian Army (FSA) take back control of the city of Jarablus from IS fighters, critics and opposers of Erdogan accused him of using the operation as a pretext to prevent Syrian-Kurdish fighters from gaining ground. Since then, FSA rebels have been seizing other towns around Jarablus at the same time as their units are also fighting the YPG, which Ankara considers terrorists.

Turkey is also engaged in a fight with The Kurdistan Workers’ Party (PKK) which is demanding wider constitutional rights for Turkey’s Kurds, who make up around 20% of Turkey’s 75 million population, before disarming in response to calls to discard their weapons in 2015.

The group, which is blacklisted as a terrorist group by Ankara and the West, took up arms in 1984 and since then, a conflict between it and the Turkish government has killed around 45,000 people.