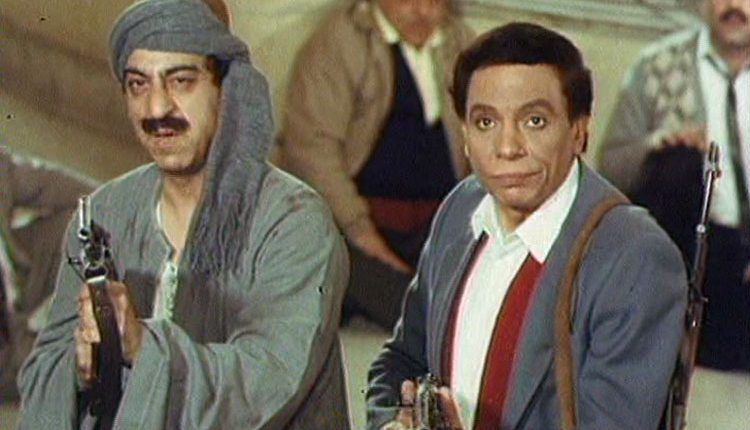 As previously mentioned at the end of last week’s article, I will begin to trace how Egyptian cinema has talked about spaces where narratives of victimisation are produced and contested. Here, I would like to ask two main questions: what are the features of the space in which “victims” are situated? And how can the same space hold more than one aspect of victimhood? I will start by discussing Sherif Arafa’s El-Erhab wel Kabab (Terrorism and Kebab), screened in 1992. Written by Wahid Hamed, this film investigates many spaces where Ahmed, portrayed by Adel Imam, is depicted as a victim.

The movie presents Ahmed as an “ordinary” Egyptian. A member of the middle class that is historically analysed as the emblem of social and economic “stability” and “security” of the Egyptian society, Ahmed appears to be passively accepting the conditions of his livelihood. He does not mind having a second job in the evening as a cashier at a restaurant to supplement the insufficient salary of his main morning job. He agrees to have a cold relationship with his wife at home. He does not mind eating food that he does not favour. He keeps silent on the corruption and the inefficiency of governmental public services, including the institution he works for, but also the public transportation system and the Mugamma (complex), an all-encompassing administrative government complex in and around which most of the film’s incidents are based.

The Mugamma, as described in many academic and journalistic writings, is the centre of Egypt’s sprawling bureaucracy. If you are living in Egypt with any nationality, you have probably visited this huge construction that is situated at one of the main corners of Tahrir Square. Built during Gamal Abdel Nasser’s regime in the 1960s as a reflection of the centralisation and representation of the Egyptian state, every ministry has a location inside the Mugamma. All kinds of official certificates and documents can be issued from it.

Ahmed is not an exception. He pays his own visit to the Mugamma to transfer his kids from a school that is far from his household to a closer one. Trying to solve this family issue, Ahmed encounters further sufferings that expose the complexity of his victimhood. Put simply, the Mugamma, which is meant to solve certain problems, leaves many others unaddressed. The same building that people target to get their needs met is the one that fashions more grievances. These grievances paradoxically urge a protest against the government that Ahmed mobilises from the state’s colossal complex.

The relation between the Mugamma and Ahmed’s victimhood is clear through all of his interactions inside and surrounding it. For example, he meets a man who is unable to get his request completed due to overcrowdedness. He discovers how his presence was ignored after his request was totally dismissed by the employees of the Mugamma. He feels more isolated and marginalised when he enters the fancy hotels, the Arab League, and the Ministry of Foreign Affairs that are located next to the Mugamma. Looking for Mr. Medhat, the always-absent clerk in the Mugamma, Ahmed finds himself socially and economically excluded from these luxurious places.

Getting back to the Mugamma after his research trip, Ahmed seems fed up. He came to the place with one problem. Now he has to deal with a lazy, hectic bureaucracy that further complicates his relationship with the complex and its employees. Different from earlier pieces of this series that showed how victims break and question their victimhood via the changing of the nature of their human interactions and relationships, Ahmed is unable to do the same. Since everything is stagnant and dull inside the Mugamma, Ahmed’s only solution was to take over the place that was supposed to recognise his right as a citizen.

Although he did not intend to do so, Ahmed becomes in control of the place where all Egyptians are required to present their victimhood as weak subjects who always need assistance. He accidentally holds a weapon, declaring himself as a “terrorist” in the eyes of security forces. He understands that he no longer has a chance to defend himself as a “victim” because he is seen as a “perpetrator”. While this fundamental shift in Ahmed’s relation with the Mugamma threatens his future, Ahmed is provided a golden chance to ask for whatever he wants. Beyond his kids’ problem, Ahmed calls his hostages to openly display all their aspirations to the government. He even goes radical and demands the resignation of the whole cabinet. But before doing so, Ahmed makes sure to mix his “terrorist” requests with a tasty kebab order accompanied by all kinds of salads for everyone inside the Mugamma!