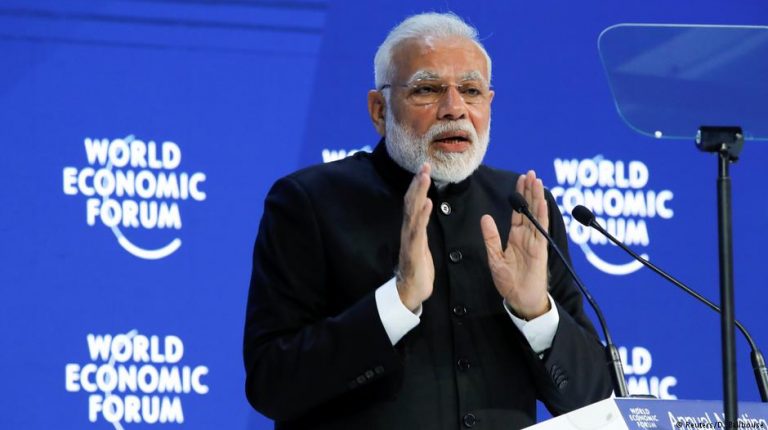 Delivering the opening keynote address at the World Economic Forum in Davos, Switzerland, Indian Prime Minister Narendra Modi has shared his vision for his country’s engagement with the international community.Indian prime minister Narendra Modi told a packed forum in Davos on Wednesday that the world in its current state looked rather unprepared to face the big challenges of the future.

He urged sweeping reforms to modernize and restructure current political and economic institutions, also with a view to reflecting the needs and developments of emerging economies.

Modi singled out three major challenges mankind was facing right now. He said the greatest threat came from rapid climate change and the resulting extreme weather conditions, natural disasters and rising sea levels which threaten the lives and livelihoods of millions of people around the world..

The prime minister identified terrorism, and the radicalization of people in many societies, as the second-biggest threat. Without providing concrete examples, he criticized world powers for, in his eyes, making the problem worse by artificially distinguishing between “bad terrorists” and “good terrorists.”

Thirdly, Modi said there was no denying the fact that many nations have become increasingly focused on themselves again as globalization “was losing its luster.” He mentioned that many trade agreements “had come to a standstill,” with cross-border financial investments dropping in many areas.

Modi argued that networked societies in the era of big data, artificial intelligence and robots probably had all the tools to address current challenges, but it needed a lot of political will and coordination to use these tools for the benefit of all.

In the final part of his speech in Davos, the prime minister touched upon the economic development of his own nation, now the fastest-growing economy of the world.

He said his government had enforced a number of reforms that had made investing and manufacturing in India a lot easier for foreign entrepreneurs by opening up “almost all sectors of the economy to foreign direct investment (FDI) and creating a unified tax system.

“The question is: Is this really development, or is it the beginning of society’s downfall?”