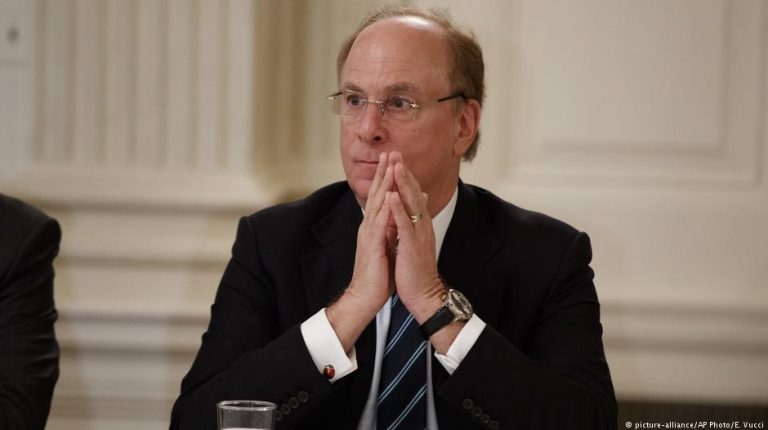 In a big push for corporate social responsibility, billionaire BlackRock CEO calls on S&P 500 companies to acknowledge their societal impact and evolve to fulfill it, or else. Lindsey Rae Gjording reports from New York.The world’s largest asset owner and CEO of BlackRock, Larry Fink, released a letter to S&P 500 CEOs calling for corporations to act with social responsibility and to see beyond short-term gains. Public response to the letter has been mixed, while some find a billionaire’s plan to combat inequality to be both ironic and hollow, many hope this call-to-action will continue to gain traction.

“We are seeing a paradox of high returns and high anxiety. Since the financial crisis, those with capital have reaped enormous benefits,” wrote Fink, while noting that low wage growth and failing retirement systems have kept the eroding middle class from receiving the benefits of these gains. “Companies must benefit all of their stakeholders, including shareholders, employees, customers and the communities in which they operate.”

While it is not clear what concrete moves BlackRock is willing to take, they do seem to mean business: “In the $1.7 trillion in active funds we manage, BlackRock can choose to sell the securities of a company if we are doubtful about its strategic direction or long-term growth,” wrote Fink, adding that BlackRock is in the process of growing its investment stewardship team which works with index investors to build business plans that harness long term goals.

Offering a neat and succinct set of bullet points for Fink’s argument, Oxfam released a report titled “Reward Work, Not Wealth” breaking down the findings from last year: The wealthy made $762 billion (€620 billion), enough to end global extreme poverty seven times over, and a new billionaire was minted every two days (90 percent of which are men). Over half the world’s population saw none of the wealth created last year, while 82 percent of it went to the richest one percent.

“To sustain performance, however, you must also understand the societal impact of your business as well as the ways that broad, structural trends — from slow wage growth to rising automation to climate change — affect your potential for growth,” wrote Fink.

With words and phrases like “engagement,” “effective” and “long term growth” this letter has encouraged many and will perhaps open opportunities for CEOs to advocate for more inclusive strategies. Yet opinion varies as to what real impact such a letter can have on the current state of affairs.

Jonathan Morduch, author of “The Financial Diaries” and expert on the American brand of inequality sees this as the start of something positive: “[Fink] seems to be suggesting something more radical and important. His concern is that too many costs and risks have been shifted onto workers. Too many workplaces have become unfriendly to workers who are not heterosexual white men. Communities do not receive enough attention, nor does the resource base,” and a rethinking of the relationship between corporations and workers may be overdue.

Other companies are stepping up as well. Craig Newmark, better known as the Craig from “Craigslist,” now works as a philanthropist under Craig Newmark Philanthropies and recognizes the importance of Fink’s letter. “It’s very significant for the world’s largest investor to ask CEOs and boards to take a look at how they’re benefitting society and to publicly declare that he plans to hold companies accountable,” Newmark told DW. “I hope that companies and leaders will see this as a call to action.”

Meet the homeless on Billionaire’s Row

But nowadays even the richest can’t get away from the glaring effects of inequality. In midtown Manhattan a chunk of expensive real estate along Central Park, fondly termed “Billionaire’s Row” is up in arms over plans for a homeless shelter in the neighborhood. Under an aggressive plan by New York’s Mayor Bill de Blasio, the old Park Savoy Hotel on West 58th Street is slated to reopen as a homeless shelter in March.

Despite acknowledging the increasing need for homeless shelters, residents of a neighboring 75-story “extreme luxury” skyscraper find it too close for comfort. Past residents of the building, called One57, include Canadian billionaire investor and Ferrari collector Lawrence Stroll and US Secretary of Commerce Wilbur Ross.

This shelter is supposed to house 150 individuals, a small fraction of the 70,000 homeless people living on the streets of New York City on any given day. Mayor Bill de Blasio continues to fight for funding, hoping to secure relief for “a new kind of homelessness that is driven by years of wages not keeping up with the cost of most of the housing in our city.”

Pay what you can

A soaring demand for private security hints to discomfort between the upper and lower classes. In the United States alone there are 1.1 million private security workers compared to 800,000 police officers. The trend exists within most developed countries and doubles in developing nations like India and China. With the number of people joining the billionaires’ club sky-rocketing, demand for round-the-clock personnel to monitor alarms and provide armored transport is enormous.

With tensions continuing to grow, it’s no wonder CEOs are showing concern. “We live in a moment in which government is retreating and some businesses stepping up. But it can’t persist like this, there are too many fissures and tensions,” acknowledged Morduch to DW. “That, I expect, is what keeps Larry Fink up at night.”