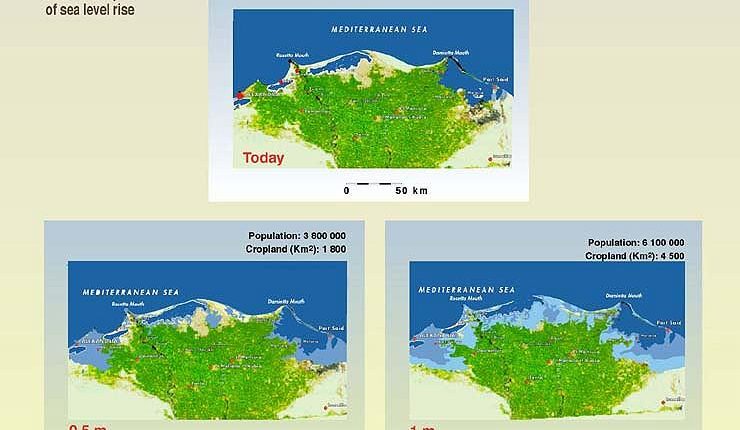 As climate change continues to hit the world, Egypt is a typical example of a developing country which is highly vulnerable to the phenomenon which faces numerous threats to its economic, social, and environmental sustainability, according to a study by the World Resources Institute.

But not all of Egypt’s regions will suffer equally from the impacts of global warming and other effects of climate change. Egypt’s Nile Delta, where more than 20 million people live and is considered the main engine of the country’s agriculture which provides the country with food, may cause food shortage problem in the country where more than 90 million people live and could face major losses, due to rising sea levels that eat away at valuable coastal properties.

In a new study in the journal Ecology and Society, researchers from the University of New Hampshire used environmental models in order to show that the effects of climate change could be much stronger by the middle of the 21st century, and a number of ecosystem and weather conditions could consistently decline even further in the future.

The Nile Delta is already subsiding at a rate of 3-5 millimetres per year. A rise of 1 metre would flood one-fourth of the region, forcing about 10.5% of Egypt’s population from their homes according to the World Bank.

The impact would be more staggering if Egypt’s population, as expected, doubles to about 160 million by the middle of the century, with the current population density in the delta at about 4,000 people per square mile.

The World Resources Institute study shows that Egypt’s situation on the map of climate change causes enormous fundamental pressures on country’s competitiveness. These pressures could also be described as growing threats to national security.

These pressures include energy security, as unsustainable use of energy resources is one of the major reasons for environmental degradation and climate change. The consequence is energy scarcity and rising energy prices which increase poverty, strain national budgets, and jeopardise Egypt’s competitiveness in the future.

Water security is also one of the main pressures facing Egypt. Global warming results in sea level rise due to the melting of glaciers and arctic ice. Consequently, the world’s freshwater resources decline while salt water intrudes into underground reservoirs. Egypt is particularly susceptible due to its low-altitude Nile Delta.

Hisham Elsafti from the Department of Hydromechanics and Coastal Engineering at Leichtweiß Institute for Hydraulic Engineering and Water Resources of the Technical University of Braunschweig in Germany, explains more about the impacts of climate change on Egypt’s coastal zones. He said that coastal cities and zones worldwide are heavily populated and packed with dense economic activities. Climate change has significant negative economic, social, and ecological impacts on them. Coastal zones are vulnerable to climate change effects mainly due to two mechanisms: storm surges in the short term and sea level rise in the long term.

He further explained that the effects of climate change are magnified by the sinking level of coastal land areas due to natural (geological effects) and man-made causes such as construction and silt dredging, which is also the case in the Nile Delta.

Elsafti told Daily News Egypt that the situation for the Nile Delta is very serious. “The delta’s shoreline retreat due to erosion was initiated by the construction of the High Aswan Dam that prevented the nourishment of the Nile Delta with fresh Nile siltation,” he aid, pointing out that “climate change implications have resulted in accelerating this retreat.”

“Moreover, 63% of Egyptian agricultural land lies in the delta, of which almost one third may be subject to permanent submergence from a sea level rise of 1 metre. This includes areas with huge economic, trade, and historic value like Alexandria,” said Elsafti.

Elsafti believes that the problem of climate change is a creeping catastrophe that can hardly raise the interest of the public or the media compared to, for example, the problem of the Grand Ethiopian Renaissance Dam, which, according to a study by the Geological Society of America, will worsen the situation by further affecting the sedimentation situation in Egypt. Further, this problem may have international implications with the anticipated increase of illegal immigration to Europe.

Khaled Ghanem, professor of environmental science and organic and sustainable agriculture at Al-Azhar University, told Daily News Egypt that climate change negatively impacts cultivated lands. He added that if the sea level rose by 1 metre, it will result in losing 12% of the area of cultivated lands in the Nile Delta. “The percentage of loss could reach 25-35% if the sea level rises by 3 or 5 metres in the worst scenario.”

“According to recent studies from the Egyptian Agricultural Research Centre, the productivity of crops such as tomatoes and oil crops in the Nile Delta have been decreased throughout the past 10 years, as a direct impact of climate change,” said Ghanem. He further explained that the productivity of grain crops was also decreased by 9% after temperatures rose two degrees, as well as resulting in consuming more water.

Ghanem added that climate change affects fish and animal production, as it decreases the appetite of animals for food because of the increase in heat and the spread of microbes. The salinity of Egypt’s lakes on the Mediterranean will be increased as well and this will negatively harm Egyptian fish stocks.

Elsafti explains that the effect of climate change on coastal areas cannot be prevented, but can only be, to a large extent, mitigated. This means that Egypt should fundamentally adapt its policies and planning around sustaining or adapting the use of coastal zones to climate change. Integrated coastal zone management (ICZM) should be flexible and highly tailored to the Nile Delta with a large input from the Egyptian society and academic institutions from all relevant disciplines.

“Another important point is the strategies adapted to protect the shoreline from erosion and protect the hinterland from temporary storm surge or permanent sea level rise and salt water submergence,” added Elsafti. According to the European Initiative for Sustainable Coastal Erosion Management (EUROSION), coastal management can be inactive, result in displacing coastal societies, holding the line (hard structures), moving seawards such as sand nourishment, or limited intervention by employing adjustments to cope with changes, according to Elsafti.

“Until recently, the favourite solution for engineers was employing hard structures like the coastal protections along Alexandria’s shoreline composed of large artificial concrete stones. This solution has internationally proven to be ineffective in the long run and has many negative effects on the marine ecology,” said Elsafti. He added, “a less intrusive protection along parts of Alexandria’s shoreline is submerged breakwaters, which can reduce erosion behind breakwaters but cannot protect against flooding or sea level rise.”

The worldwide trending philosophy for coastal protection is the building with nature technique, which originated in the Netherlands, a country with most of its land below sea level, Elsafti explained. Building with nature is about employing eco-based solutions to problems like sea level rise. Nourishing the right marine ecosystem at the coastline can provide an organic means for the shoreline to build itself naturally as sea levels increase. Combined with other environmentally friendly engineering solutions such as sea dikes and careful planning for management of sea flooding, the effects of storm surges and sea level rise can be mitigated to a large extent. However, these strategies need to be carefully planned with a lot of local research and high interest from stakeholders and decision makers.

It is important to raise public awareness on how serious the problems of the Nile Delta coastal zones are, said Elsafti. He believes that the deeper involvement of Egyptian universities and research institutions in developing an ICZM is needed. “Additionally, we need to employ international collaboration to exchange scientific and technological advances, especially through Egyptian academics and professionals abroad. Further, a large-scale public discussion should be initiated to plan the future of this important region of Egypt. Last but not least, a governmental legal and institutional system must be put in place to further develop, implement, observe, and modify the Egyptian ICZM, as needed.”

In 2010, the Adaptation in Egypt through Integrated Coastal Zone Management project started with financing from the United Nations Development Programme (UNDP), through The Special Climate Change Fund (SCCF). Through this project the, Coastal Research Institute (CORI) of the Egyptian Ministry of Irrigation and Water Resources has started testing three proposals along the delta shoreline in three specific pilot projects. The three pilot projects are environmentally friendly and are tailored to Egyptian conditions and were tested through a storm season to evaluate their efficiency.

In October 2017, the Green Climate Fund (GCF) has approved the UNDP project entitled Enhancing Climate Change Adaptation in the North Coast of Egypt, to be implemented by the Egyptian Ministry of Irrigation and Water Resources (through the National Water Research Centre and its sub institutions, the Shore Protection Authority, and the CORI) with a total budget of $31.4m over seven years. The project aims to protect the densely populated low-lying lands in the Nile Delta, the home of 25% of the Egyptian population, which have been identified as highly vulnerable to climate change induced sea level rise.