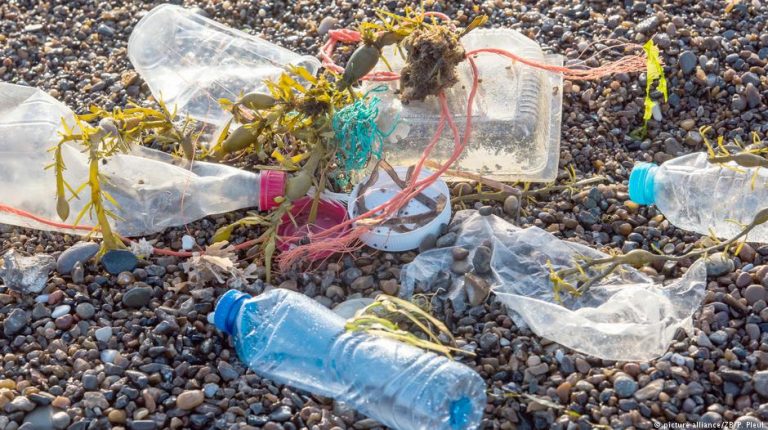 After the EU unveiled a high-profile push to rid the continent of plastic waste, now companies like McDonald’s, Costa and Evian are announcing their own initiatives. Can this help solve the world’s plastic trash problem?Last week, the European Union unveiled a headline-grabbing plastic waste strategy with the goal of making all plastic packaging reusable or recyclable by 2030.

A cascade of business announcements have followed in the week since the EU strategy was announced.

They want to be seen, as McDonald’s put it, to be “part of the solution” rather than part of the problem.

When European Commission Vice-President Frans Timmermans unveiled the plan in January, he reminded the world that “If we don’t change the way we produce and use plastics, there will be more plastics than fish in our oceans by 2050.”

The next day, McDonald’s made a surprise announcement that could change the future of fast food: All McDonald’s packaging worldwide will come from sustainable sources by 2025, the company said.

That means all straws, wrappers, cups and bags will come from recyclable or renewable materials — up from half currently.

Only 10 percent of the 37,000 McDonald’s restaurants worldwide recycle packaging today, but the chain aims to bring this to 100 percent in just seven years.

The company said reducing packaging is the number one request it hears from customers.

Following on the heels of this, Danone — the French company that makes Evian water — announced that it will produce all its plastic bottles from 100 percent recycled plastic by 2025.

The company will partner with Loop Industries, which converts used polyethylene terephthalate plastic waste into higher-quality plastic that can be used for Evian water bottles.

“We want to use the power of our global brand to take a leadership position, drive collaboration across the industry and, together with partners, transform our approach to plastic,” said Patricia Oliva, Evian’s global brand director.

‘The world has woken up’

The government of the United Kingdom pledged earlier this January to ban all avoidable plastic waste by 2042 — though this has not been backed by any specific legislation.

Iceland supermarkets committed to eliminating plastic packaging from its own brand products by the end of 2023. “The world has woken up to the scourge of plastics,” said Iceland Managing Director Richard Walker.

Diageo, the world’s largest spirits producer, has committed to phasing out the use of all plastic straws and stirrers from its offices and by 2020.

Costa Coffee has pledged to remove plastic drinking straws from its stores this year, and replace them with a yet-unspecified environmentally friendly alternative. Supermarket chain Waitrose said it will stop selling plastic straws by September.

Restaurant chains Wagamama and Pret A Manger said they would cut down on the use of such straws.

That all of these businesses are based in the UK reflects how much impact a government policy signal can have — along with how businesses use timing to paint themselves green.

Emma Priestland, an environmental campaigner with the group Seas at Risk — part of the Rethink Plastics Alliance — said she welcomes the recent commitments.

“It’s about time that these companies started to take steps to deal with their incredibly wasteful plastic usage,” Priestland told DW.

But she fears the focus has been too much on recycling rather than reuse, or avoiding use altogether.

“We can’t just switch from one kind of plastic to another. We already have too much plastic to recycle, and our systems can’t handle it.”

Although the plastics industry has given tepid public support to the European Commission’s strategy, behind the scenes is a split between companies that want to make major investments in recycling, and those that are more cautious.

Industry association PlasticsEurope has set itself a voluntary target of recycling 60 percent of plastic packaging by 2030, with the goal of reaching 100 percent by 2040. The association has said the EU should focus more on banning plastics from landfills.

“Only a legally binding landfill restriction on all recyclable and other recoverable post-consumer waste will put an end to the landfilling of all waste which can be used as a resource,” said Karl H. Foerster, executive director of PlasticsEurope.

The proposed EU plastics strategy must still be approved by EU governments, and the European Parliament.

Karolina Skog, Sweden’s environment minister, told DW last week that the proposed strategy is not strong enough and still has room for improvement.