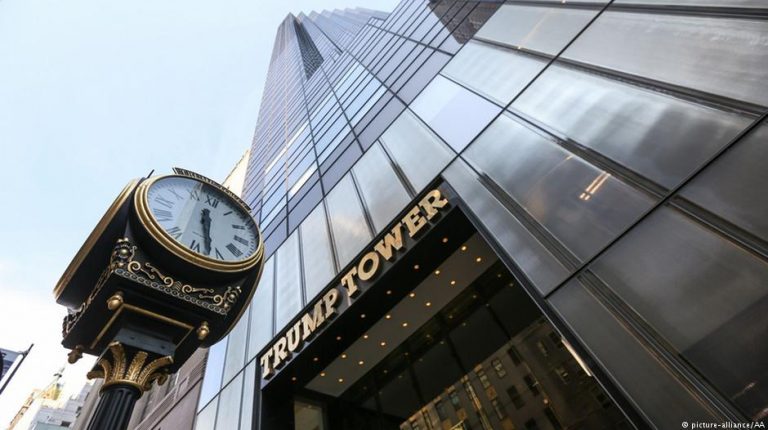 Property promoters in India have promised Trump Tower investors a meeting with Donald Trump Jr. Ethics watchdogs say it’s an egregious example of President Trump’s real estate ties conflicting with the presidency.Trump Tower Delhi NCR (National Capital Region) is the latest luxury property in India being built in cooperation with the Trump Organization. Planned to begin construction in March, the two 600-foot (182-meter) buildings will feature 258 luxury residences, with the priciest condos going for more than $1.4 million (€1.1 million) each.

Located in Gurgaon on the outskirts of New Delhi, the project is being built by Indian property developers M3M India and Tribeca Development. Promotional materials promise a Trump address as having “power, privilege and prestige.”

According to reports in the Indian media, the promoters also promise the first 100 buyers a trip to the United States for a meeting with President Donald Trump’s son, Donald Trump Jr.

Ethics groups in the US say the promotion crossed a red line, with foreign business interests being offered direct access to the first family in exchange for a million-dollar property investment. There is concern that investors could potentially use Trump Jr. as a conduit of influence to his father.

“President Trump is inextricably linked to his business empire – it has his name on it, his sons run it and he continues to profit off of it,” said Jordan Libowitz, communications director at Citizens for Responsibility and Ethics in Washington (CREW), an ethics watchdog group.

“If someone wished to influence the president, the easiest way may be to get the ear of his son,” Libowitz told DW. “There should be no link between the president’s policy decisions and his bank account, but unless he divests, we cannot know for sure that is happening here.”

After becoming president, Trump said that “no new deals” would be done during his time in office, and in January 2017, announced he was turning over control of the Trump Organization to his sons, Eric Trump and Donald Trump Jr. Critics have said that Trump placing control of his business with his children does not do enough to separate his interests as president from that of the Trump business.

Trump also stopped short of completely divesting from Trump Organization assets. Before he was inaugurated, US ethics officials recommended that Trump place all of his assets in a “blind trust” – a mechanism used to avoid conflicts of interest in which the owner doesn’t receive information on how the money is being used.

“Trump’s refusal to divest from his business, and the fact that he continues to directly profit from it through his revocable trust, will continue to create conflicts of interest and give the appearance of a presidency for sale,” Carolyn Kenny, an analyst at the Washington-based policy institute Center for American Progress, told DW.

A big name in India

India is currently home to more Trump-branded properties than anywhere outside of North America.

The Delhi NCR project in Gurgaon is his fifth property in India, and according to Tribeca, the largest to date in terms of square feet.

In Mumbai, a 75-storey luxury apartment “Trump” tower is currently under construction. In Kolkata, a 38-story residential project is also underway. In Pune, a city to the southeast of Mumbai, a twin-tower, luxury residential complex has been completed. And a Trump-branded commercial development is being constructed in Gurgaon.

However, the Trump Organization has not invested equity directly in any Indian realty and does not own the properties. Instead, it lends the brand name “Trump” to developers under a license agreement. According to CNN Money, the Trump brand draws much higher prices than similar luxury properties in India. And the name alone can generate millions of dollars in licensing fees.

Financial filings obtained by the Washington Post indicate that Trump brand licensing in India has brought in payments to the Trump Organization ranging between $1.6 million and $11 million since 2014. Kalpesh Mehta, founder of Tribeca who “introduced the Trump brand” to India, told the Indian television channel NDTV that the Trump brand had “great recall in the north Indian market and with buyers.”

“I think it is very difficult for any Trump property not to be seen as a piece of the presidency,” said Kenney. “This can be seen quite starkly in this case where the Trump Organization’s Indian business partners are offering access to the first family as part of their marketing and sales strategy.”

Kenney added that Trump and his family have blurred the lines between the Trump business and the Trump administration, such as by having official presidential visits at Trump properties and advertising Trump properties through official government channels.

Trump’s foreign real estate interests have continuously generated controversy since he was elected president in November 2016.

A few weeks after being elected, Trump met with Indian real estate moguls and Trump Organization partners, Sagar and Atul Chordia, along with Tribeca’s Kalpesh Mehta at Trump Towers in New York. While it was dubbed as “informal,” the meeting quickly raised conflict of interest questions in US media and government circles. All three of the Indian executives are running ongoing Trump-branded property development in India.

In May 2017, a real estate promotion in China from Kushner Companies, formerly run by Trump’s son-in-law and advisor Jared Kushner, came under fire for allegedly using its connection to the presidency to lure property investors. The project had aimed to raise $150 million from Chinese investors as part of a US visa program.

Chinese investors chase ‘golden visas’ to the US

On Monday, Kalpesh Mehta told the Economic Times in India that as a developer of ultra-luxury properties, it was “very common” to host customers.

“Given the tremendous success of our recent launches with Trump, we have discussed preliminary plans to host a celebratory event for an exclusive group of owners in NYC where they would have the opportunity to experience the Trump brand first-hand,” Mehta said in a statement published by the Indian daily. He added that details would be finalized in the coming months.

Kenney from the Center for American Progress said the promotion was troubling.

“There is no way to know what buyers will discuss with Trump Jr. in these meetings and whether they will use the meetings as an avenue to request favors from President Trump or his administration,” she said.

“By offering access to the Trump family in exchange for purchasing properties, the developers, and by extension the Trump family, certainly seem to be profiting off of the Trump presidency.”