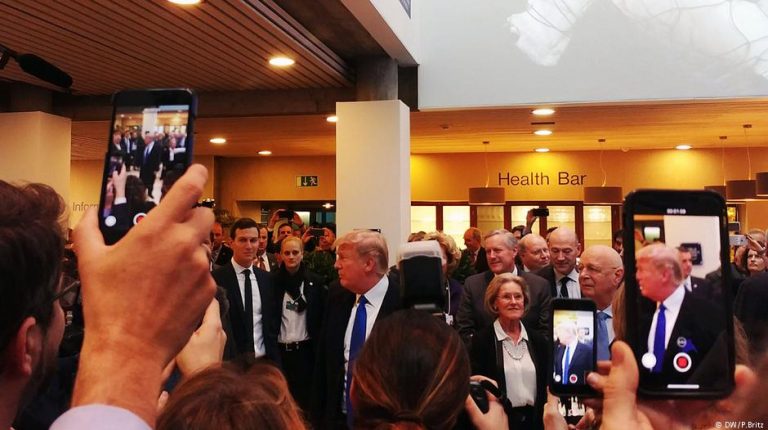 The 48th World Economic Forum in Davos will be remembered for two things: massive amounts of snow and the appearance of US President Donald Trump. A review of this year’s event by DW’s Manuela Kasper-Claridge.The rich and powerful jostle, push and hold up their expensive mobile phones to snap a photo of the man who has just entered the convention center in Davos, Switzerland, where the World Economic Forum was taking place: US President Donald Trump.

Shortly beforehand they complained about tightened security, endless traffic jams on the narrow streets of Davos and the closure of some sidewalks. All of this because of Donald Trump, grumbled many participants. But now they wanted a picture of the president.

“One doesn’t think he deserves it, this attention,” said a woman who nonetheless hoped for a snapshot. Another participant added, “my family in Saudi Arabia absolutely want a photo.”

A swimming pool and Donald Trump

Visibly pleased, Donald Trump walks down the hallway, stops solemnly, shakes hands, chats and disappears together with several ministers in one of the back rooms of the Davos congress center.

It’s hard to imagine that in normal circumstances there is usually a public swimming pool in here; but for now it is skillfully covered with boards and a soft carpet.

The organizers of the World Economic Forum had chosen to give the American president a slot on the last day of the event, in order to give space and attention to important topics such as the future of Europe, the state of the global economy, the fragile political situation in the Arab world or discussions on Africa. Still, Donald Trump was already in the lead on Thursday’s worldwide “Twitter mentions” regarding the World Economic Forum.

His speech on Friday was a big disappointment though. It was all platitudes about the greatness of America and had little substance. Evidently, Donald Trump considered the event in Davos as a major promotional event. Questions from the audience were not allowed.

“He is very boring when he behaves himself,” said an audience member who got right to the heart of the matter. But when Trump did answer a question from World Economic Forum founder Klaus Schwab and once again attacked the media, there were loud boos from the audience.

More than 70 heads of state and government came to Davos this year. Only around 3,000 participants were admitted. For this event you can’t just sign up to participate and pay a fee. To attend the World Economic Forum you have to be invited.

It is a momentous logistical undertaking to accommodate the thousands of participants and their staffs in the small Swiss village. Many participants had to accept long journey times; it snowed so much that a 20-kilometer (12.4-mile) journey from the neighboring Klosters could take 7 hours. Buses and trains were canceled. Participants who stayed in one mountain hotel got stuck on a steep-grade rack railway. Extra help had to be fetched to clear the track.

Anyone looking for comfort at the World Economic Forum is at the wrong place. Everything is cramped and expensive. A small tomato soup costs 28 Swiss francs (€24, $30) and up. In the hotels every available space is rented. Even bathrooms were turned into meeting rooms; those who were able to rent a small dusty copy room to use as an office were lucky. CEOs of multi-billion-dollar companies were forced to sit on tiny stools in crowded, dim hotel lobbies in an effort to answer emails.

Just being there is everything

“No, it’s not fun, but where else can I meet so many business partners from around the world in such a short space of time,” said a CEO who has been coming to Davos for many years. He also gets a quick grasp of what is going on in the world, because it’s not only business people and politicians who come to the World Economic Forum. The conference also lures representatives of NGOs, refugee organizations, scientists and tech pioneers.

The mood regarding the condition of the world economy was surprisingly good. International Monetary Fund boss Christine Lagarde expects worldwide economic growth to continue for the next few years. A major financial crisis is not in sight as long as there are no major political crises.

But since showing too much optimism is also not good, Lagarde also warned against resting on laurels. Investments in digitization, for example, are needed; a demand which is also supported by German Chancellor Angela Merkel.

The consequences of climate change were discussed at many podiums in Davos and categorized as a major risk to the global economy. In the first few days of the conference another topic dominated the debate: the sexual and economic discrimination of women and the current #MeToo debate. And for the first time in World Economic Forum history, the co-chairs who guide the major debates were all women — including Norwegian Prime Minister Erna Stolberg and Ginni Rometty, the CEO of IBM.

Discussions about unequal pay for women or sexual discrimination were well attended. After all 21 percent of the conference participants were female, which only shows that the world’s leadership elite is mainly male and white. The next World Economic Forum in Davos in 2019 is unlikely to be any different.