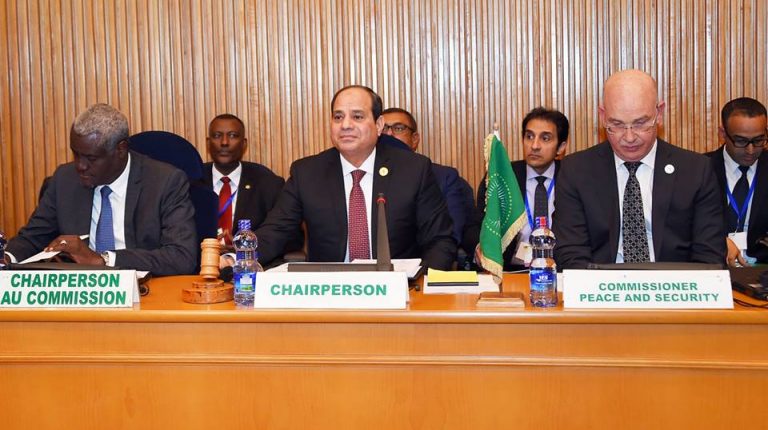 State media focused on President Abdel Fattah Al-Sisi’s visit on Saturday to Addis Ababa to participate in the 30th Ordinary Session of the African Union Summit.

Both leaders of the two main state-run dailies addressed the role of Egypt in Africa. In Al-Ahram, Abdel Mohsen Salama, chairperson of the newspaper and president of the Press Syndicate, said Al-Sisi is doing his best to ease tensions with Ethiopia over the Grand Ethiopian Renaissance Dam (GERD), an issue that was caused by the mishandling of the issue by those who were in power before him and further intensified by Ethiopia’s manipulative methods which Sudan joined.

Al-Ahram’s editorial team also wrote that “without doubt, African nations are looking forward to benefiting from Egypt’s experience in fighting corruption and terrorism.”

Editor-in-chief of Al-Akhbar Khaled Miry wrote that “since the arrival of Al-Sisi to power in 2014, Africa returned to Egypt and Egypt returned to Africa.” He also wrote that Africa is opening its doors to “Al-Sisi’s Egypt” to perform its leading role.

Meanwhile, chairperson Yasser Rizk wrote a full-page article on the presidential election, where he stated that the current situation does not reflect the people’s ambitions for a democracy based on political plurality and competitiveness, explaining that it is not Al-Sisi who should be blamed for that, but rather candidates who did not pursue or did not follow legal procedures.

On a different note, this day commemorates 28 January seven years ago, a turning point in the 2011 revolution. Journalist Ayman Sayyad picked up the topic in Al-Shorouk newspaper. Sayyad argued that nobody will ever know the reality of all the details that happened on that day, or during that period in general, but shed light on activists who lost their eyes in the revolution while demanding freedom.

The newspaper’s Editor-in-chief Emad El-Din Hussein’s daily column focused on the presidential election’s administration as he criticised the government’s handling of candidates, saying they should have been encouraged to continue the race instead of the one-candidate situation that was reached.

In a sarcastic piece, Hossam Sokkary, former head of BBC Arabic, wrote that Al-Sisi could compete against himself by presenting two different programmes to solve the issue of absence of plurality.

Likewise, Mohamed Saad Abdel Hafiz, member of the Press Syndicate’s board council, wrote that ousted president Hosni Mubarak and his men had more expertise in running “such shows” and that the current regime damaged the image of Egypt, asserting that legitimacy of power comes through transparency at ballot boxes and peaceful democratic changes.

In Al-Watan newspaper, Amr Adeeb, senior journalist, wrote in defence of the Egyptian police, which in his opinion, “suffered a lot of wrongdoing” during the January 2011 events, which aimed to distort their image before the public opinion, and that the demolition of security institutions was the first step to the chaos that happened in Iraq, Syria, Yemen, and Libya. Adeeb also argued that the police body is keen on penalising its men if involved in bad practices, giving the example of the referral to two officers to trial recently over torture suspicions in the case of a young man publicly known as Afroto, who died in the Mokattam police station.