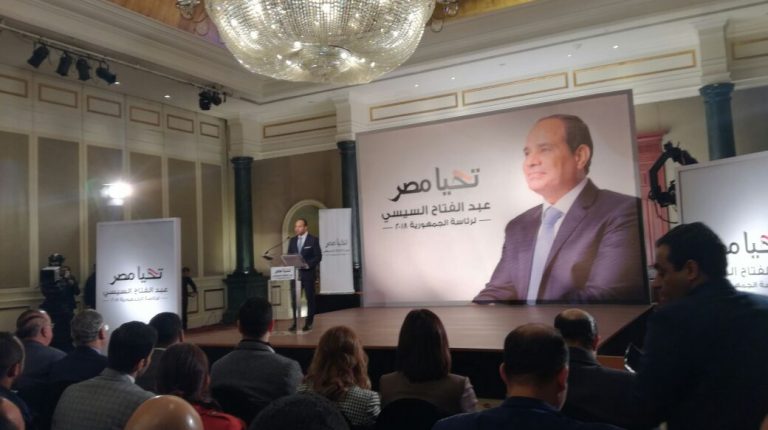 The campaign made the announcement during a Monday press conference.

Each presidential candidate is required to submit a minimum of 25,000 endorsement forms to be eligible to run in the election.

Abu Shoka stressed upon the legal procedures for the collection of endorsement forms. He said it was not the job of notary offices, where the forms are issued, to collect them, but rather, it is the responsibility of the campaign.

Ideally, each citizen would take their form and deliver it to the campaign, but according to Abu Shoka, this is not the most popular nor effective method. “The most widespread means is through political parties, groups, and popular campaigns supporting Al-Sisi, even before doors were officially opened for candidacy,” he stated.

He explained that the campaign examined and sorted the endorsement forms they received to ensure they were legally valid, and that there were many which turned out to be invalid, such as those submitted by people below legal age of 18, which he said were in the thousands.

Abu Shoka was also the legal representative of Al-Sisi’s campaign in the 2014 presidential election, according to local media reports. As a lawyer, he worked on cases involving figures considered close to ousted president Hosni Mubarak’s regime, such as businessperson Hisham Talaat Mostafa. His father, Bahaa El-Din Abu Shoka, is a member of Al-Wafd Party and heads the legislative committee of parliament.

Former ambassador Mahmoud Karem was designated general coordinator of the electoral campaign, a position he also held in 2014. Karem represented Egypt at several international institutions, including the North Atlantic Treaty Organisation and served in Egyptian missions to the UN.

A number of candidates withdrew from the race, while others were arrested. The past few days witnessed confusing moves by politicians, in what seemed to be, and was described in the media as, “a quest for last-minute candidates”.