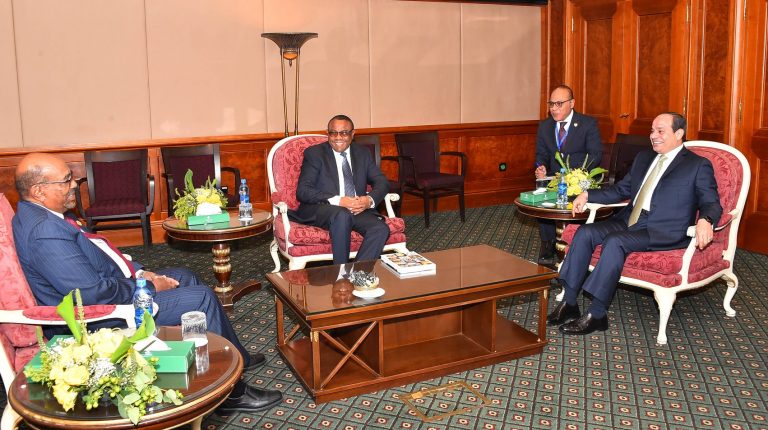 President Abdel Fattah Al-Sisi said Monday that there are no crises between Egypt, Sudan, and Ethiopia regarding the Grand Ethiopian Renaissance Dam (GERD), state media reported. He also added that the three countries speak up in one voice regarding the GERD, the voice of mutual interest.

He also added that the three countries reached an agreement regarding the GERD that will not affect the people of the three nations.

The meeting also discussed relations between the three countries and the declaration of principles that was signed in 2015, as well as issues of mutual concern, such as countering terrorism and the security crises in South Sudan, the Republic of Central Africa, and the Horn of Africa, according to state media.

Furthermore, Egypt’s Minister of Foreign Affairs Sameh Shoukry told reporters that the tripartite summit between the three leaders of Egypt, Sudan, and Ethiopia agreed on completing the technical studies on the GERD within one month.

There are no mediators in the negotiations on the dam until now, said Shoukry.

On November 2017, Egypt’s Minister of Water Resources and Irrigation Mohamed Abdelaty announced freezing the negotiations on the GERD after failing to reach an agreement between the three countries after the 17th meeting of the Tripartite National Committee on the Renaissance Dam in Cairo.

The Grand Ethiopian Renaissance Dam, formerly known as the Millennium Dam, is under construction in the Benishangul-Gumuz region of Ethiopia on the Blue Nile River.

Construction of the dam started in April 2011. However, Egypt has expressed concerns that the construction of the Renaissance Dam could negatively affect its historic Nile water share of 55bn cubic metres, which it has had access to since a 1959 agreement between Egypt and Sudan.

Ethiopia shows no political will for reaching GERD agreement: Shoukry