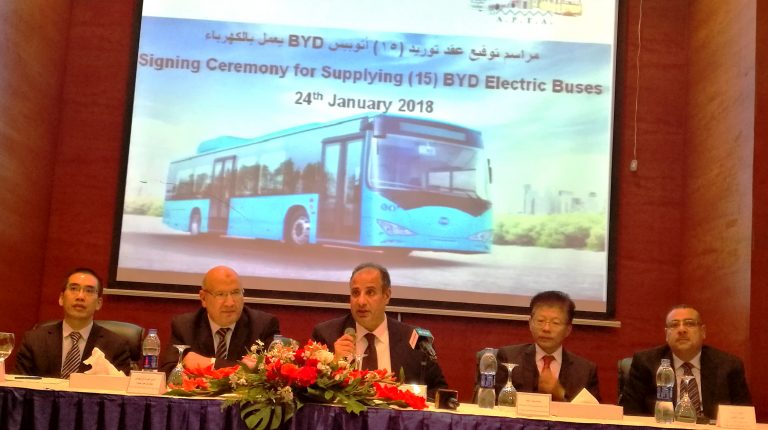 Chinese automobile manufacturer BYD Auto Company (BYD) signed a contract for the supply of Egypt’s first 15 electric buses, specifically to Alexandria, for public transport services in the governorate. The contract was signed by Chairperson of the Alexandria Passenger Transportation Authority Khalid Alywa and General Manager of BYD Ad Huang.

This move came out of Alexandria’s tendency to use clean fuel for public transport, in the framework of the governorate’s efforts to provide civilised and environment friendly means of transport in the coming years. Alexandria posed a tender in 2017 to purchase electric buses, which 17 international companies bought the conditions booklet for. Only five of them presented their financial offers, of which four were from China and one from Italy. The governorate reviewed all the Chinese offers. In January 2018, BYD and its Egyptian agent Al-Amal Company for Foreign Trade won the tender.

A BYD electric bus does not have any negative impact on the environment. It can accommodate up to 90 passengers. It comes with air conditioning, a top speed of more than 80 kilometres per hour, and a battery that lasts for 3-4 hours, enough for 250 kilometre ride. Its engine capacity is up to 300 kWh, equivalent to 430 horsepower. The bus provides a special space for wheelchairs for those with special needs, and WiFi connection.

During the signing ceremony, Governor of Alexandria Mohamed Sultan said that Alexandria is one of the most promising and distinctive governorates in Egypt, with many investment opportunities and resources, making it suitable for foreign investment. He added that the government pays attention to developing public transportation, noting the transport authority in Alexandria has more than 750 buses. Sultan pointed out that the transport authority has not changed its transportation fees despite the high prices of fuel, adding that they are working to increase the number of bus lines to reach all parts of the governorates.

Meanwhile, Deputy Chairperson of Al-Amal Amr Sulaiman said that his company supports the development of the passenger transportation system in Egypt, starting with Alexandria, in cooperation with the world-famous BYD brand. BYD produces more than 49% of the global production of batteries used to operate various electric buses, he added. Sulaiman further added that the company managed to produce 14,000 electric buses in 2017, bringing its total production to more than 35,000 buses in the last five years. He pointed out that his company’s contract with Alexandria will also include providing technical support and aftersale services.

On the other hand, Alywa said that Egypt witnesses about 40,000 deaths annually due to pollution, asserting that public buses are the best solution for traffic congestion as each bus equals approximately 25 to 30 cars in terms of fuel wasted due to traffic, estimated to be worth EGP 23bn, besides EGP 11bn for fixing roads. He noted that the new deal is he first of its kind in Egypt and Africa, as was the case when Alexandria first established its tram lines in 1860, Alywa revealed that the authority will put one electric bus into service as a trial for three months, then it will operate the remaining 14 buses, adding that authorities will work to gradually shift regular buses operating in Alexandria to become electric.

For his part, Huang expressed his pleasure to sign the new contract, noting that his company has provided a large number of electric buses to many countries around the world. He added that his company also signed a memorandum of understanding with the Alexandria Governorate to establish the first monorail in the country through the build–operate–transfer system in the near future. The signing ceremony was also attended by Hassan Suleiman, chairperson of Al-Amal; Ahmad Al Wakil, chairperson of the Federation of Egyptian Chambers of Commerce; and the Chinese minister of commerce.

Attempt to end dilemma of fixing cars in Egypt