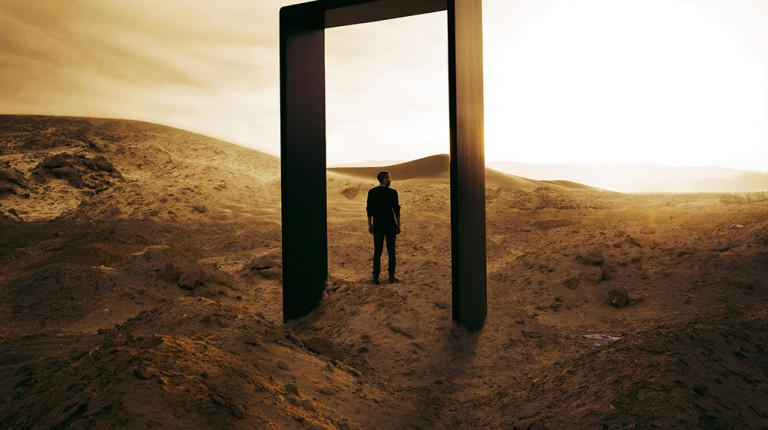 Growing up outside Egypt, black and white movies were the only connection young artist Mahmoud Shaltout had to Egypt’s culture, heritage, and people. Scenes from Egypt’s golden era of film were the windows Shaltout was introduced to the streets of Egypt through, allowing him to explore places which he never forgot years later. After returning home, Shaltout documented his memories through an online project, in which he pictured some of the locations Egypt’s most famous films were shot in, photoshopping his picture alongside some of the famous superstars to create a scene of these films where present meets past.

In his project, 31-year-old Shaltout captured himself at some of the places legendary films were once shot, like Heliopolis’s Al-Ahram Street, where the comedy film “Losos Laken Zorafaa’” (Thieves But Funny) was set. His photoshopped picture portrays him looking at Ahmed Mazhar and Adel Imam, the film’s stars, while they seemingly look back at him. In the half black and white, half coloured shot, Shaltout captures the differences between Egypt’s streets, architecture, and people’s outfits in the 1950s and nowadays.

“I have a passion for the black and white Egypt I grew up watching on TV,” Shaltout told Daily News Egypt. “As a kid growing up in the Gulf, these movies were the only way I could learn about my country.”

Under the nickname “Mac Toot”, Shaltout aimed to focus on the change that occurred in Egyptian society, especially the architecture of buildings and the country’s streets.

“The culture and heritage Egyptians have are priceless. Nonetheless, they do not appreciate it and they take it for granted without recognising the gems [of buildings’ architecture] they have in the streets,” he asserted.

The project, which is made of several pictures, started as a coincidence when Shaltout ran into the same building the legendary film “Al-Les Wel Kelab” (The Thief and the Dogs)’s master scene was shot in. On the stairs of CILAS art school near Sultan Hassan Mosque in Old Cairo, Shaltout immediately recognised the place and the idea of capturing the before and after scene popped into his mind.

The captured photo shows Shaltout on the stairs of CILAS while looking back at Shoukry Sarhan, while he looks back at him as he walks up the stairs.

“When I saw the stairs, I immediately recognised that I’d seen them before in the movie, yet they were time-worn. That’s when I decided to document the change happening to these places,” he explained.

After that, Shaltout decided to track the famous places that once appeared in black and white movies to detect the tremendous change they have witnessed. His goal is to raise awareness regarding the deterioration of heritage buildings in Egypt and how they are left unmaintained until they collapse.

“I believe that the pictures successfully made people recognise how much neater Egypt’s buildings and streets used to be,” he pointed out.

With the hashtags #cairofilmed and #cairothenandnow, the pictures went viral on social media and were met with huge astonishment, something that he never expected.

“The reception totally took me by surprise. I never expected the pictures would get this amount of warm welcome. However, this made me focus on creating several others and posting them online soon [after],” he concluded.