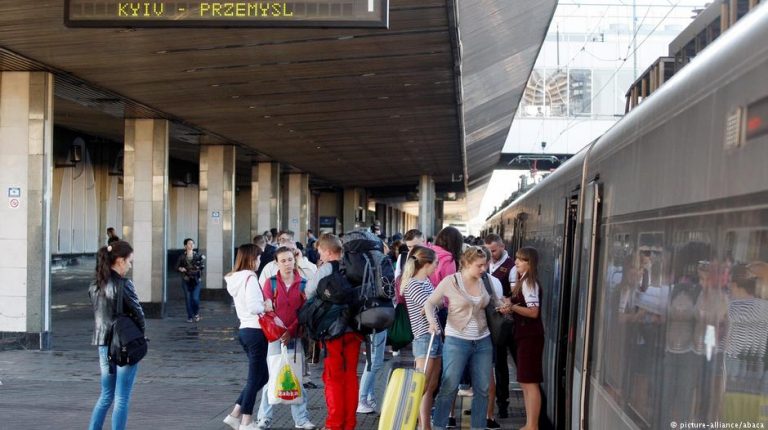 With the EU easing travel restrictions for Ukrainians, Warsaw is worried fewer of its eastern neighbors will come to Poland for work. Cheap Ukrainian labor has helped contain inflation and boost growth.National Bank of Poland Governor Adam Glapinski warned on Tuesday that Poland faces a deficit of workers from its eastern, non-EU, neighbors.

“What are we concerned about? For example, in terms of the labor market — will we find enough workers in Ukraine and Belarus to compensate for the labor deficit in Poland?” Glapinski told Dziennik Gazeta Prawna in an interview.

Since an estimated million Poles made the shift to the UK after Poland’s EU accession in 2004, most to work in low-paid sectors such as agriculture, the gap at home has been filled by Ukrainians and Belarusians. “This has significantly supported growth and lowered wage and CPI inflation in Poland,” says Tomasz Wieladek, from Barclay’s research department in London.

From June onwards, Ukrainians will have 90-day visa-free travel to the EU. Although this does not grant them the right to work there, it is seen as a big step in opening up Western European labor markets to Ukrainian workers, many of whom work in illegal or semi-legal jobs.

Ukraine, in the middle of a conflict with separatist rebels after the 2014 pro-Western uprising, has seen its currency collapse and many workers have sought work abroad.

Poland’s jobless rate has fallen to record lows, driving wages higher and firing inflationary concerns. In December, the unemployment rate was 6.6 percent, on the back of strong economic growth of 4.5 percent last year, an ageing population and an outflow of younger workers to richer parts of Europe.

“Immigration from Ukraine is one of the key issues on the Polish market,” Andrzej Kubisiak, an analyst at Work Service, a recruitment company in Warsaw, says. “In our opinion immigration is now crucial both for the labor market and for the whole Polish economy,” he added.

Growth in average gross wages quickened to 4.3 percent from a year earlier in January, the fastest in five months. This after averaging about 4 percent in 2016. Higher salaries could put extra pressure on inflation, which in January hit the central bank’s target range for the first time in four years. Higher interest rates in turn could curb growth.

“It is important to understand the broader context,” says Wojciech Konunczuk, head of the department for Ukraine, Belarus and Moldova at the Center for Eastern Studies (OSW) in Warsaw.

“Poland now has the lowest unemployment rate since 1990 and its labor market has accepted around one million Ukrainian migrants in the last 3-4 years. But while there are still a lot of vacancies, the lack of workers is seen as the biggest challenge for further economic growth,” according to Konunczuk, adding, “Polish GDP growth in 2017 was 4.6 percent and without foreign workers such a high figure would not be possible.”

How many is a lot?

The number of Ukrainians absorbed by Poland is comparable to the total of migrants that came to Germany in 2015-2016, according to official estimates.

Only 16 million of Poland’s 38 million citizens are currently working. Whereas an estimated 1-1.5 million Ukrainians work in Poland, many of whom work without work permits and on temporary contracts, Kononczuk says.

Preliminary data for 2017 suggest 900,000 registrations in the first half of the year alone and the Polish minister responsible for this issue has already confirmed 250,000 work permits for 2017 as a whole, he adds.

Almost half of employers sought Ukrainians because no local hires were available and 40 percent of firms in sales and services rely on Ukrainians, according to a survey of 300 companies in January by Work Service.

This is driven largely by the economic slump that followed Ukraine’s 2014 pro-western revolution and the conflict in the country’s east. Most are from western Ukraine not fleeing the war itself, but its economic fallout.

Poland has been an exceptional case among EU countries having a partially opened labor market to Ukrainians.The majority of those who come are working-age economic migrants attracted by the prospect of earning up to five-fold more doing the same job in Ukraine, thanks in part to a massive fall in the value of the Ukrainian currency, the hryvnia.

“A big part of their salaries is sent back home,” says Konunczuk.

According to the NBP, remittances sent from Poland by foreign workers were around 9.6 billion zlotys (€2.3 billion, $2.8 billion) in the first half of 2017.

“The large majority of foreign workers are Ukrainians, so the total financial transfers from Ukrainian workers working in Poland could be around €3-4 billion, which is an equivalent of around 3-4 percent of Ukraine’s GDP,” he adds.

Poland’s Union of Entrepreneurs and Employers (ZPP) says five million more workers are needed to sustain growth over the next three decades and Ukrainians alone will not be enough to plug the gap.