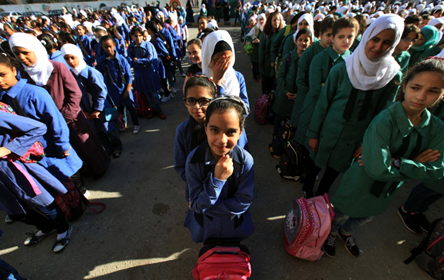 In early 2011, thousands of Egyptian youth expressed their disappointment about the overcrowded schooling system, but few education reforms have been offered in Egypt. There have been reform proposals with implementation hampered by the deteriorating economic, political, and social turbulence. This has compelled many Egyptian students to seek opportunities to study abroad. In this article, Daily News Egypt reveal facts about education in Egypt, to help readers comprehend the cause of struggle for change in the Egyptian schooling system. In 2010 alone, over 2,646,000 students registered at higher learning institutions and the  number of students likely skyrocketed afterwards. Since Mubarak was overthrown, seven new universities have opened, but what are their teaching standards? Below are seven hard facts.

To answer the question “what is education like in Egypt?”, Daily News Egypt gives you a detailed chronicle. Here, you find both modern and Islamic learning systems simultaneously practiced. Amazingly, Madrasas and Kuttabs exist in our teaching system.

There is a lot of foreign influence. To learn how to improve our education system, we have sought foreign aid. Global institutions, like Fulbright and UNESCO, have generously offered support to the Egyptian learning system. The World Bank has also contributed. Students and top scientists in Egypt are using equipment, facilities, and expertise from developed nations in their operations. Both the US and UK have allowed Egyptian teachers to master their degrees at their universities. If a student decides to submit an application and write an admission essay to their dream university in the US or UK, they may search for educational opportunities and helpful instructions provided at Edubirdie.

All higher learning institutions are regulated by a Supreme Council of Universities. Recently, Ashraf Hatem, secretary general of the council, categorically stated that the government is focused more on accessibility to instruction than quality. There is controversy over whether this is best practice to improve the level of education in Egypt. The Ministries of Education and Higher Education also play a critical role in education management.

Could the Egyptian school system be ignoring a fundamental aspect of teaching? In 2012, the Central Agency for Public Mobilisation and Statistics conducted a study and found that Egypt’s unemployment rate stood at 77.5%, meaning millions of graduates are jobless. The government needs to look at ways to improve our education system, including exploring options like online studies. Head to this link for more on the future of e-learning.

The education system needs a complete overhaul. Many people who have asked “what is education like in Egypt?” have proposed a turnaround for the way things are done. Whether or not the government will act aptly to rectify the situation is a matter we can only wait and discover.

Egypt has no international education agreements with other countries. What is a school like in Egypt without an international link in this global village? No wonder several students are seeking training opportunities abroad.

In an interview with Egypt’s top government officials, this article’s author confirmed that no real reforms in schooling are underway.

Just like any other nation in the world, Egypt has both strengths and weaknesses in the learning field. Depending on your objectives, inclinations, and interests, use the facts above to determine your learning choice. If you are an Egyptian, you have an option to study at home or abroad. But generally, the schooling sector needs constant improvements to merge the dynamic market. Owing to the ever-changing technology, teaching reform is a mandatory obligation for serious jurisdictions.

Mohammed W. Rizkallah is a PhD student in STEM education at the University of Minnesota and an instructor in the Professional Educator Diploma Programme and in the Core Curriculum department at the American University in Cairo.

Entreprenelle holds ‘SHE CAN’18’ event for women entrepreneurship in Cairo on 2,3 March