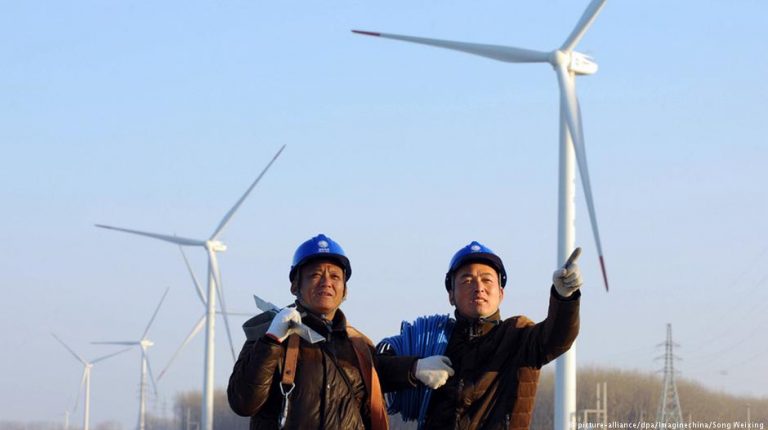 It’s a new milestone: Europe got more of its power from solar, wind and biomass than coal last year. But when it comes to investment, the European industry is in decline as China steals the title of renewables pioneer.For 2017, Europe passed a new landmark in its transition to a renewable energy supply: For the first time, more of its electricity came from the sun, wind and biomass than from coal.

The news, published this week by climate think tanks Sandbag and Agora Energiewende, is part of a worldwide trend for renewables. Globally, wind and solar power in particular are experiencing a sustained boom, and can increasingly compete with fossil fuels on cost.

According to the International Renewable Energy Agency (IRENA), the cost of photovoltaic power is set to drop by an average of 50 percent worldwide over the next three years.

“Turning to renewables for new power generation is not simply an environmentally conscious decision, it is now – overwhelmingly – a smart economic one,” Adnan Amin, director of IRENA said at a presentation of the agency’s report on 2017 renewable power costs in Abu Dhabi.

“Governments around the world are recognizing this potential and forging ahead with low-carbon economic agendas,” he added.

But despite Europe achieving a new high in renewable power production, industry observers accuse it of relinquishing its role as leader of this global transition.

“The European Union has been a strong leader in tackling climate change and promoting the development of renewable energy in the past,” Wendel Trio, director of Climate Action Network Europe, told DW.

“But now that the rest of the world is catching up — both on climate action via the Paris Agreement, and on renewables, through large-scale investments — the EU has lost pace.”

Anton Lazarus of the European Environmental Bureau says that although Europe is still reaping the rewards of past policy, the future of the industry will depend on what it does next.

“I think it’s important to be clear that any trend in where our energy comes from now is linked to investments from many years ago,” Lazarus told DW. “We have seen important growth in renewables in Europe over the past years but it is essential that this trend continues,” he said.

“In Europe right now we have the lowest investment in over a decade,” says Stefan Gsänger, general secretary of the World Wind Energy Association (WWEA). “Under such conditions, businesses obviously cannot invest … innovation is happening elsewhere.”

And that place is China — which is building out its solar and renewable capacity like no other country on Earth.

According to Bloomberg New Energy Finance, the world’s most populous country invested $133 billion in renewables last year — more than ever before.

More than half that sum went into solar power. According to the Chinese National Energy Administration, the country built 53 gigawatts of new photovoltaic capacity in 2017 — more than half the planet’s installed capacity.

“China has taken on this leadership role because it recognizes the enormous market potential and economic advantages,” Claudia Kemfert, energy expert at the German Institute for Economic Research, told DW.

Meanwhile Germany — once hailed as the photovoltaic pioneer — installed only around 2 gigawatts of solar capacity in the same period, and the EU as a whole just 23 gigawatts, according to this week’s study.

This week’s new study report said it was “disappointing that solar generation is still lagging so substantially.”

Overall, the share of European power generation that came from renewables rose by just 0.2 percentage points from 2016 to 2017, the report says.

“Until 2011, the EU played a clear leadership role,” says Hans-Josef Fell, former German Green party lawmaker and president of the Energy Watch Group. “That was actively abandoned through politicians’ negligence. A policy was adopted of protecting the nuclear power, coal and gas sectors over renewables.”

The European Parliament, the European Commission and the member states are currently discussing a comprehensive legislative package entitled Clean Energy for All Europeans.

The European Commission’s proposal includes a target for renewables’ share in total EU energy consumption of 27 percent by 2030. According to Eurostat, that figure was 17 percent in 2016.

Earlier this month, the European Parliament voted to raise this target to 35 percent — but the move is likely to face resistance from some EU member states. “Many national governments are opposed to setting more ambitious binding targets at the European level,” Lazarus said.

The Agora/Sandbag study says with current growth rates, Europe is on track to achieve the 27 percent goal. But environmentalists and the renewables lobby say it should be aiming far higher than even the European Parliament’s target.

If Europe “wants to seriously argue in favor of leadership, the EU should aim for a minimum target of 50 percent of total energy consumption coming from renewables by 2030,” Gsänger says.

Increasing ambition could address emissions; even as Europe and China broke renewables records last year, Agora says greenhouse gas emissions in the EU rose by around 1 percent. Chinese emissions likewise ticked up, from 2.2 to 4.1 percent, according to estimates by the Rhodium Group consultancy firm.

One advantage the Chinese renewables sector has over Europe is that overall, energy demand continues increasing. “There, you can invest in new capacity without necessarily taking fossil-fueled or nuclear capacity of the grid,” says Julian Schorpp of the Association of German Chambers of Commerce and Industry in Brussels.

That means for renewables to expand in Europe, the competition — that is, fossil fuel energy — has to go. “As long as we still support fossil fuels and nuclear power, there will not be enough market space or demand for new energy,” Fell says.

Globally, the falling cost of green power is helping to drive fossil fuels out of the market. But Rainer Hinrichs-Rahlwes of the German Renewable Energy Federation says politicians also have to take action — and the most obvious step is to get public money out of the fossil fuel sector.

“The costs are falling rapidly and the technology is maturing,” Hinrichs-Rahlwes told DW. “If it weren’t for subsidies for fossil and nuclear energy, wind and sun would be the cheapest energy sources almost everywhere.