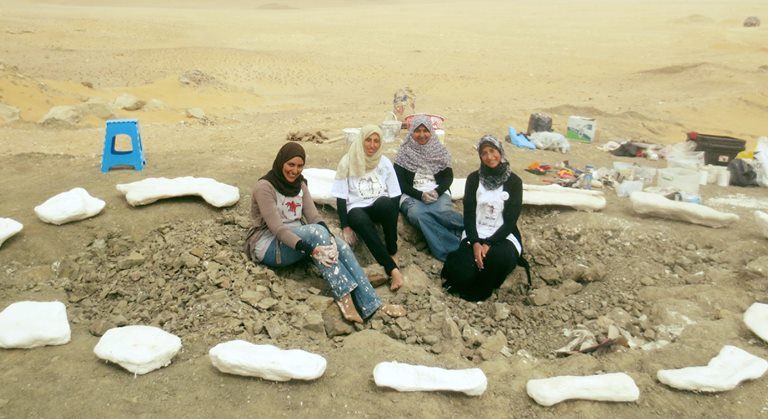 A new species of dinosaur, a school-bus-length, long-necked plant-eater with bony plates embedded in its skin, has been unearthed in Dakhla Oasis in Egypt’s Western Desert by a team of researchers from Mansoura University and Ohio University.

The fossilised remains of the dinosaur Mansourasaurus shahinae were unearthed by an expedition undertaken by the Mansoura University Vertebrate Paleontology (MUVP) initiative, led by Hesham Sallam from the department of geology of the university.

Findings of the study revealing the new discovery were published on Monday in the journal Nature Ecology and Evolution. Mansourasaurus is the sixth and youngest dinosaur to be discovered in Egypt.

During the Triassic and Jurassic periods when the dinosaurs lived, all the continents were joined together as the supercontinent of Pangaea. Continents began splitting apart and shifting towards the configuration we see today during the Cretaceous Period.

Historically, it has not been clear how well-connected Africa was to other Southern Hemisphere landmasses and Europe during this time and to what degree Africa’s animals may have been cut off from their neighbours and evolving on their own separate tracks. Mansourasaurus, as one of the few African dinosaurs known from this time period, helps to answer that question, according to the study.

What is very important about the new discovery is that it fills the gap of the Late Cretaceous in Africa, the time period from 66-100m years ago. That means that the course of dinosaur evolution in Africa has largely remained a mystery.

By analysing features of its bones, Sallam and his team determined that Mansourasaurus is more closely related to dinosaurs from Europe and Asia than it is to those found farther south in Africa or in South America. This, in turn, it shows that at least some dinosaurs could move between Africa and Europe near the end of these animals’ reign.

“Our project aims to fill a 30m year gap in the Late Cretaceous fossil record of Africa, from which very few fossils of land-living vertebrates are known,” said Sallam. The dinosaur’s name “honours both Mansoura University and Mona Shahin for her integral role in developing the MUVP,” according to Sallam. The field team included researchers Iman El-Dawoudi, Sanaa El-Sayed, and Sara Saber.

“This is an important discovery because very few fossils are known from the end of dinosaur history in Africa. This dinosaur is similar to others from Europe, even though there was no direct land connection,” Roger Benson, professor of palaeobiology at Oxford University, told Daily News Egypt.

“Mansourasaurus shahinae is a key new dinosaur species and a critical discovery for Egyptian and African palaeontology,” said Eric Gorscak, a postdoctoral research scientist at The Field Museum and a contributing author to the study.

“Africa remains a giant question mark in terms of land-dwelling animals at the end of the age of dinosaurs. Mansourasaurus helps us address long-standing questions about Africa’s fossil record and palaeobiology—what animals were living there, and to what other species were these animals most closely related?” Gorscak—who began work on the project as a doctoral student at Ohio University, where his research focused on African dinosaurs—added, according to a press release from the University of Ohio.

Telling the story of the Mansourasaurus discovery, Sallam said that it began in December 2013, when he received an invitation to give a talk about vertebrate palaeontology at New Valley University in Kharga Oasis in southern Egypt. To get there, he drove for about 12 hours with his graduate students from Mansoura University, Sanaa El-Sayed and Iman El-Dawoudi, and a third student, Sara Saber, from Assiut University.

“As the sun was going down, I noticed a new road that could give us a view of some unexplored exposures, so the next morning we drove all the way to its end and found a gravel quarry. We had only half an hour to look at the rocks before the long drive back to Mansoura. Sara [Saber] and I walked in the same direction, while the others headed off in different directions to cover as much ground as possible,” said Sallam.

The lead author further explained that “only a few minutes later, I looked over my shoulder to see that Sara was brushing something, which I assumed was probably a rock. I kept walking and a few minutes later my cell phone rang. It was Sara. I picked up the phone to hear her excitedly telling me to please come back, because there were fossil bones all over the place. I quickly returned to find that the area was indeed full of bones…the remains of an associated partial skeleton of a sauropod dinosaur.”

The team returned to the site after two months of preparation, however, the excavation was difficult as the area is extremely hot, and the team was hit with sandstorms and even pouring rain, but their enthusiasm kept them going, “as we knew that we were writing a new chapter in the history of Egyptian vertebrate palaeontology,” said Sallam.

He added, “every evening, we went to the highest point in the area to get access to the internet to learn more about dinosaur anatomy. On the third day, we found the most diagnostic bone, the left dentary, from which it was clear that the lower jaw of this sauropod had a pronounced ‘chin’. We were in close contact with our friends and colleagues in Egypt and the US, who were following the action daily. As time passed, it became clear that we had skull bones, much of the shoulder girdle and forelimb, multiple vertebrae and ribs, part of the foot, and pieces of several dermal plates—more than was known for any dinosaur of this age from the entire African continent.”

Regarding the name of the unearthed dinosaur Mansourasaurus, Sallam said that the name was suggested by his American fellow researcher Joe Sertich.