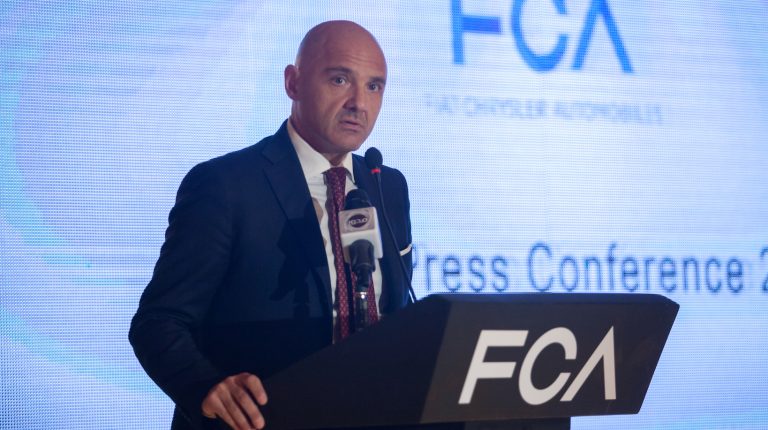 Fiat Chrysler Automobiles (FCA) Egypt shed light on its most significant achievements and results during 2017, as well as its ambitious plans for 2018. The company made the announcements at its annual press conference, which is of special importance as it comes after encountering the most challenging year throughout the automotive history of the Egyptian market.

Francesco Monaco, chief executive officer of FCA Egypt, expressed his satisfaction with the company’s results in 2017 in general. Despite the challenges faced by the Egyptian automotive market which led to a decline in the demand on cars by 30%, according to AMIC’s annual report, the company succeeded in achieving its targeted profits for the year through a set of strategies that contributed to achieving those goals.

“Before I talk about the outlook for the current year and our plans ahead, allow me first to refer to some milestones and important steps which have been taken in 2017. An important milestone was the official launch, which took place in the first quarter of the year, of the new Fiat Tipo that is designed for families and targets a large segment of customers with its competitive prices. Through this particular model, Fiat is seeking to regain its position as one of the oldest and most popular car brand in Egypt. In less than one year after its launch, Tipo was ranked among the top ten best-selling vehicles in its segment, according to AMIC’s annual report,”Monaco said.

He added, “besides that, we have the two models Alfa Romeo Giulia and Stelvio, which were both introduced at the annual Automech Formula Motor Show. We have also expanded the Alfa Romeo dealer network in Egypt through adding Abou Ghaly Motors alongside Nile Engineering. This was an important step seeking to reinforce and enhance the brand in Egypt.”

Monaco continued, saying, “the local assembly contract for both the Jeep Wrangler and the Jeep Grand Cherokee has been renewed with Arab American Vehicles Company (AAV). This step was based on the FCA’s understanding of the importance of those vehicles in the Egyptian market. Consequently, FCA Egypt is continuously working to provide the best services and offers to the Egyptian consumer.”

The CEO said, “our relationship with our customers does not end when our vehicles are sold; on the contrary, this is only the start of a long-lasting relationship that combines us with our esteemed customers through the aftersales services we offer them. Based on this concept, we have designed a mobile application in order to facilitate a convenient communication with our customers, respond to their queries, and provide them with the latest news and information regarding the aftersales services related to their vehicles. Moreover, we have provided a mobile service workshop vehicle to carry out maintenance of customers’ cars at their locations with a team of highly trained mechanics in all aspects of vehicle repair.”

Francesco also added, “definitely, our success and expansion in the delivery of our services in 2017 would not have been a reality without the commitment and fruitful and constructive cooperation of our success partners, such as AAV and our dealer network that includes strong and well-established entities such as Abou Ghaly Motors, Ezz Elarab Automotive, El Tarek, and Nile Engineering.”

After talking about the past year, Francesco turned to talk about the plans and perspectives ahead in 2018, saying, “we started the new year with a surprise which thrilled our Jeep Renegade customers upon the announcement of the new spare part price list for this model. In fact, this accomplishment came as a result of the diligent work performed by the aftersales team who carried out extensive and careful studies regarding the optimum freight and shipping route. Their efforts were eventually successful in setting a new price list which was commended by all our Jeep Renegade customers.”

He further added, “we expect to announce shortly the release of a new entry level model for Tipo at a very competitive price, which will add to its success.”

Moreover, Monaco confirmed the company’s commitment to produce and assemble the current JK Wrangler which will live on for the 2018 model year as it practically proved to be one of the most successful models. Since FCA Egypt operates within the requirements and capacity framework of the local market, while considering not to lay further burdens upon its customers, careful study must be undertaken to formulate the company’s future plans, he said.

The CEO of FCA Egypt concluded his speech by thanking all the guests and the company’s customers for the great confidence they have placed in FCA Egypt and its continuous diligent efforts to offer the best services at competitive prices that meet the specific requirements of the Egyptian market.

It is worth noting that FCA Egypt held it press conference this year at the Manial Palace and witnessed a broad participation of specialised automotive journalists who had the opportunity to hold exclusive interviews with the company’s managers and executives.