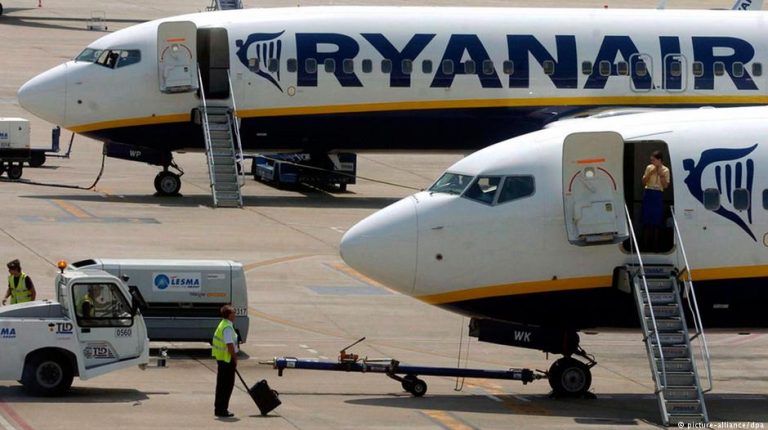 Europe’s largest budget airline has reported a surge in quarterly profits. The positive result came despite a flight cancellation crisis that had hit Ryanair after the airline had rostering problems with its pilots.Ireland’s Ryanair reported Monday its quarterly net profits rose by 12 percent. It said post-tax earnings increased to €106 million ($132 million) year on year in the group’s third quarter to December.

The carrier added that passenger numbers grew by 6 percent to 30.4 million people despite the massive flight cancellations that had been sparked by pilot rostering problems.

“We are pleased to report this 12-percent increase in profits during a very challenging third quarter,” Chief Executive Officer Michael O’Leary said in a statement, speaking of a “pilot rostering failure in September.”

Ryanair had to cancel some 20,000 flights through March this year, mainly because of botched holiday scheduling for pilots.

The Irish airline’s earnings report came just one week after it signed an agreement to recognize the British Airline Pilots’ Association (BALPA), reversing its previous unwillingness to ink such accords with trade unions.

“We have successfully concluded our first recognition agreement with BALPA in the UK, a market which accounts for over 25 percent of our pilots,” O’Leary said.

The carrier, which suffered major turbulence in recent months from aggrieved staff, announced earlier that its UK-based pilots had accepted pay increases of up to 20 percent.