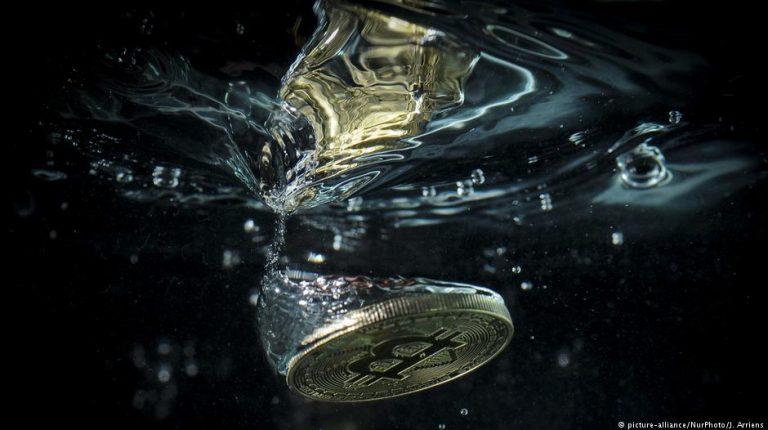 What goes up must come down, old wisdom has decreed. Does it apply to Bitcoin? As the cryptocurrency’s value continues to fall, we chart its dramatic journey to date.If you had lived under a rock for the past year and emerged today, the story of Bitcoin would be bewildering. Even for those who have lived in the full glare of the blinding light the cryptocurrency has cast, it is pretty confusing.

For those in need of an intensive course on the most famous cryptocurrency of them all, one chart is particularly instructive. That’s the one from CoinDesk, a bitcoin specialist, which shows how the price of Bitcoin has changed from July 2010 to the present day.

Read more: Bitcoin, cryptocurrencies — how do they work?

Even the most unsophisticated market watcher can discern a pattern here. A long, more or less straight line to 2014, a few bumps, and then another long straight line to the start of 2017. And then? A spike that rises and falls so sharply, it would not look out of a place on a rendering of the Manhattan skyline.

What have been the events behind Bitcoin’s big moments? We take a look back at some key dates in this extraordinary story.

Out of the shadows

August 18, 2008: The domain name bitcoin.org is registered; something is in the offing. Three months later, a paper written by the mysterious “Satoshi Nakamoto” titled Bitcoin: A Peer-to-Peer Electronic Cash System is posted online.
January 3, 2009: Nakamoto, whose true identity has never been revealed, mines the first ever block on the chain, effectively creating the first Bitcoins. Supposedly angry at the financial crisis, he/she had spent over a year writing the fiendishly complex software — 31,000 lines of code — the aim of which was to create a form of money out of the reach of traditional banking systems and monetary policies.
October 5, 2009: The first US Bitcoin exchange rate is published by a site called New Liberty Standard. At this point, one Bitcoin was worth around 7 percent of one US cent, so not much.
May 22, 2010: The first actual purchase of goods using Bitcoin takes place when Laszlo Hanyecz, a coder who had previously contributed to Bitcoin software, buys two pizzas for 10,000 Bitcoins. In the so-called “Bitcoin community”, May 22 is now informally known as Bitcoin Pizza Day.
August 15, 2010: A vulnerability in Bitcoin is exploited, allowing certain users to bypass restrictions and generate unlimited amounts of Bitcoin. Within hours, the issue is resolved and any additional Bitcoins generated by the bug are deleted.

December 27, 2010: Bitcoin ends its first full year of existence with a value of $0.29 (€0.23) per Bitcoin, a major jump when one considers its value of less than one cent just a year earlier.
April 12, 2011: Having originally broken the one Bitcoin = one US dollar mark in February, before falling under it again, the cryptocurrency moves past the one dollar mark and has not since fallen below it. Bitcoin starts to garner more and more attention beyond its traditional core, with investors, economists and journalists all beginning to take a sustained interest.
November 14, 2011: Early signs of Bitcoin’s volatility are apparent in 2011. From a value of $22.59 on June 6, it falls to $2.26 by November 14, a value fall of 90 percent. The collapse can be traced to a successful June 19 hack on Tokyo-based Mount Gox, then one of the world’s leading Bitcoin exchanges. The hack, although ultimately dealt with, spooked investors. Fears over security, volatile prices and links to criminality saw Bitcoin enter a deflationary spiral.
November 29, 2013: Having steadily regained value throughout 2012, Bitcoin rises at a much quicker pace in 2013, culminating in a massive boom towards the end of the year, breaking the $1000 dollar mark for the first time after increasing its value tenfold in the space of a few weeks. A pile-on of Chinese investors is thought to be behind the surge. It peaks in late November, but falls back steadily in the early months of 2014. Its value fluctuates roughly between $800 and $200 over the next three years.

December 11, 2014: In a sign of its more-established mainstream appeal, Microsoft begins to accept Bitcoin as payment for software.
September 1, 2015: UK bank Barclays announces it will begin to accept Bitcoin for transactions, the first major lender in the US or Europe to do so.
March 4, 2016: Japan, often thought of as the symbolic home of Bitcoin, sees its government recognize virtual currencies as having a similarly legitimate function to money.
January 1, 2017: The most dramatic year in Bitcoin’s history begins with the cryptocurrency starting the year valued just below the $1000 mark.
June 15, 2017: After months of steady momentum, during which it exceeded $3000 in value, Bitcoin hits the skids and loses almost a fifth of its value amid increasing criticism from some leading financial institutions.

September 1, 2017: The blip is short-lived. Having split into two forms in August, by September, it has broken the $5000 mark and so begins a seemingly relentless surge that sees Bitcoin’s rollercoaster ride command global headlines for several months.
December 1, 2017: October and November are dizzying times. Worth just over $4000 at the start of October, it is valued at just under $10,000 by the end of November. Yet despite the surge, predictions of doom grow darker by the day. On December 1, the Bank of France says Bitcoin is not a currency, has no economic basis and is merely a speculative asset.
December 17, 2017: Bitcoin hits its highest ever value to date of $19,783, one week after it made its debut on a major global exchange in Chicago. It has not hit that figure since. A series of falls, recoveries, and deeper falls took place and by the turn of 2018, Bitcoin was back around the $14,000 mark.
January 24, 2018: Online payment firm Stripe announces it will phase out support for Bitcoin payments, two days after South Korea banned anonymous Bitcoin trading.
February 6, 2018: Having declined steadily throughout the month, the final week of January and first week of February are bruising. At the time of writing, Bitcoin’s value is hovering around the $6000 mark with the new head of the Bank for International Settlements, Agustín Carstens, saying Bitcoin has become a combination of “a bubble, a Ponzi scheme and an environmental disaster.”