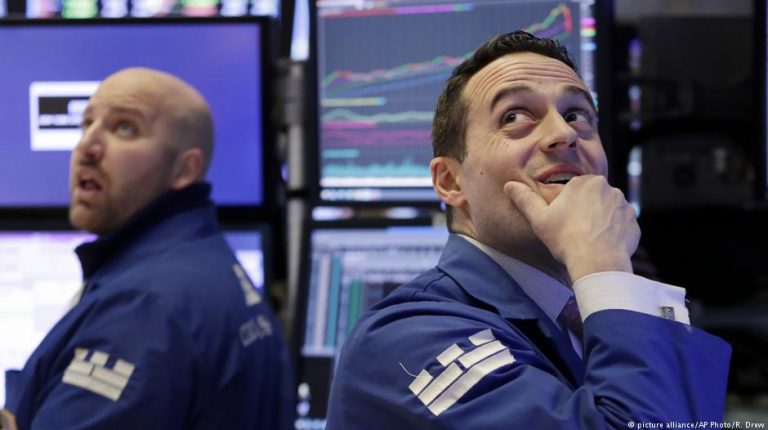 Wall Street ended the day Tuesday, with solid gains after a rollercoaster ride that saw losses halved from Mondays plunge. Markets in Asia were down seven percent but regained momentum to close down 4.7 percent.When the markets closed on Tuesday investors heaved a sigh of relief as Wall Street clawed its way back from one of the biggest plunges in 6 ½ years. On Wall Street, a late surge helped them regain almost half of the losses from the day before.

Even after Tuesday’s gains, the S&P 500 is still down 6.2 percent from the recent record high it set on January 26. That is less than the 10 percent drop that is known on Wall Street as a “correction.”

Corrections are considered normal during bull markets, and even helpful in curbing excessive gains. It allows new investors to buy into the market at lower prices. It has been an uncommonly long time since the last market correction, which ended almost two years ago.

Even as the Dow index gyrated in and out of positive territory, the feeling spread that the worst of a brutal downturn was over.

“Dow up! Panic over, as you were everyone,” tweeted James Hughes, chief market analyst at AxiTrader, during a brief breather for the index. Jasper Lawler, head of research at London Capital Group, tweeted “Trader’s paradise out there right now”, in a reference to volatility which boosts brokers’ earnings from trading fees.

However investors remain fearful that signs of rising inflation and higher interest rates could bring an end to the bull market that has sent stocks to record highs.

“I still think this is a continued reaction to the very rapid rise in interest rates and inflation expectations over a short period of time,” said Michael Arone, chief investment strategist at State Street Global Advisors. “We are just seeing some continued selling after a very long period of a complacent environment.”

Wall Street’s partial recovery helped European shares off the day’s worst levels, but markets remained deeply in the red at the close. In Frankfurt, Germany’s blue-chip Dax index was down 2.4 percent, closing at 12,341 points.

Some strategists view it as a healthy pullback after a rapid run-up in the start of the year and strong 2017 gains, and say the improving economic outlook is a positive for stocks overall.

Trevor Greetham, Head of Multi Asset at Royal London Asset Management in London, has already started placing buy orders on the stock market but said any move would be gradual.

“When you get these periods of intense panic it makes sense to be buying while others are forced sellers but on the other hand you don’t know that the negative mood will go away quickly,” he said. “The last time we had that degree of panic was August 2015 which was the first of the two Chinese devaluations. At that time it took about eight weeks before the market digested the bad news and started rallying again,” he added.

Earlier on Tuesday, Japan’s Nikkei 225 Stock Average plunged by more than 7 percent, suffering its biggest one-day points drop since 1990. It later recovered slightly to close at just above 21,500 points, down 5 percent.

Top Japanese officials moved to downplay concerns on the trading floor on Tuesday. Finance Minister Taro Aso declined to comment on share prices, but insisted that corporate performances were not getting worse.