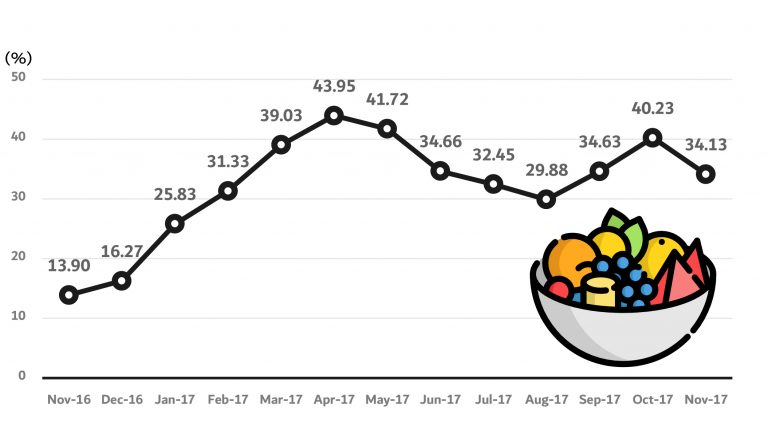 Egypt ranked second among the largest exporters of citrus in the world last season with a total of 1.52m tonnes.

Egypt competes with four countries, including Spain, which ranks first with exports of 1.6m tonnes; South Africa in third with 1.12m tonnes; the USA in fourth with 635,000 tonnes; and Turkey with about 400 tonnes.

The Russian market is one of the world’s biggest markets importing citrus. Five countries export to it: Egypt, Spain, South Africa, Turkey, and Morocco.

Egyptian citrus exports to Moscow outperformed all of them in the 2016/2017 season, with contracts amounting to 217,900 tonnes.

Turkey gained 63,100 tonnes of Egypt’s share in Russia in the last season after relations between the two countries returned to normal, which brought down Cairo’s exports down from 281,800 tonnes in 2015/2016.

CEO of the British Egyptian Co For General Development (Galina) Abdel Wahid Soliman said that the political crises in the relations between some countries help Egyptian products to grow.

He added that the severing of relations does not last long, so reliance on disputes cannot last for long.

The embargo imposed by Moscow on Greece, Italy, Cyprus, the United States, and Australia will help Egyptian exporters increase their market share in the Russian market.

South Africa is the nearest competitor to Egyptian citrus in the Saudi market, but Cairo’s exports are twice as high as Johannesburg’s.

Over the past two years, orange exports to the Chinese market have increased due to local citrus suffering from citrus greening disease, causing a rapid decline in their domestic production and a steady rise in prices.

Egypt benefits from this as Egyptian oranges are available for purchase during the domestic production period in China, which helps to bridge the gap.

South Africa competes strongly with Egypt in the UAE market, where it exported about 80,500 tonnes, against 69,900 tonnes from Egypt.

Ali Eissa, former head of the Agriculture Export Council (AEC), said that customs tariffs are not a major obstacle to Egyptian citrus exports, but the real crisis lies in transport costs, which awards competition to other markets.

“Competing countries have a comparative advantage in their geographical proximity to most of the importing countries,” he said.

Spanish citrus is characterised by low transport costs due to proximity, and South Africa has a competitive advantage with its variety of orange types in July and September of each year compared to Egypt.

He explained that the harvest season in South Africa precedes Egypt’s by 60 days, which helps South Africa meet demand.

Oranges account for the largest proportion of farmed areas, as farmers prefer it to other fruits, according to a report from the US Department of Agriculture.

Ahmed Farahat, chairperson of Extra Global Company, said that increased cultivation of oranges is due to the high demand on the local market and for exports.

Supply chains for small-scale farmers who did not have the capacity to export earlier allow them to benefit from export markets by selling their crops to traders and major exporters.

He pointed out that the Arab countries can absorb large quantities of Egyptian products, but the rejection of products repeatedly during the recent period and the political and economic events experienced by some countries prevent small exporters from taking risks.

Islam Pasha, president of Best Harvest Bakeries, said that the increase in marketing in Arab countries requires the establishment of commercial areas on borders, so that production is stored in them and that these countries withdraw from them as needed.

“This procedure will ensure exporters’ confidence in the markets, and then they can contract large quantities every season, but must first maintain the specifications and quality,” he added.

Orange harvesting usually takes between four and five months for all the fruit’s varieties.

In addition, orange production has increased significantly in the past 10 years to meet demand from domestic and international markets, with production increasing by 64%, which is 1.170m tonnes, reaching 3m tonnes last season, up from 2.83m tonnes in the season before that.

According to the US Department of Agriculture, in 2016/2017, Egypt was the sixth largest producer of the world’s oranges after Brazil, China, the United States, the European Union (without Spain), and Mexico.

The report predicted an increase of orange production by 6% in the current season (180,000 tonnes) to go up from 3m tonnes to 3.18m tonnes.

The increase in production is due to the growth of harvested areas due to improved weather conditions, as well as an increase in the number of new fruit trees.