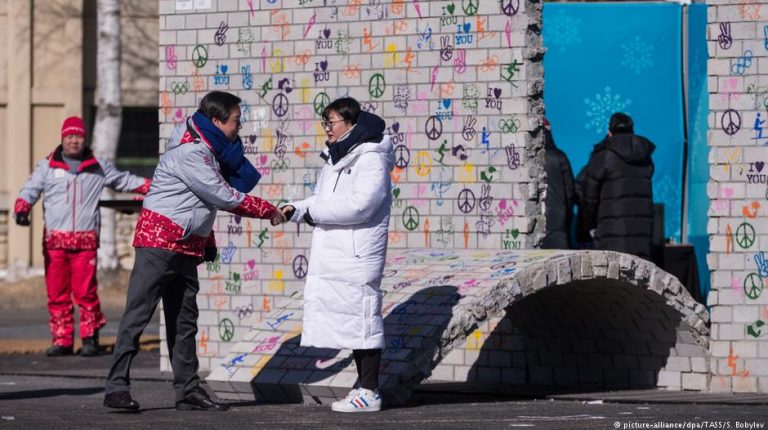 The Winter Olympics in Pyeongchang will hopefully serve to decrease tensions between North and South Korea. DW’s Stefan Nestler says that sport is once again being overburdened, and that we shouldn’t expect too much.”O sport, you are Peace!” begins the ninth verse of Pierre de Coubertin’s Ode to Sport. “You forge happy bonds between the people by drawing them together in reverence for strength which is controlled, organized and self-disciplined.”

Using a pseudonym, De Coubertin, the founder of the modern Olympics, entered his poem in the art competition at the 1912 Summer Games in Stockholm, winning gold in the literature category.

De Coubertin’s idea of bringing people together through sport is replicated in the Olympic Charter, which states that the International Olympic Committee (IOC) is duty bound “to place sport at the service of the harmonious development of humankind, with a view to promoting a peaceful society.” It’s a lot to expect of sport. Too much, in fact.

“Hopefully, the Winter Olympics will open the door to a better future on the Korean peninsula,” said IOC President Thomas Bach ahead of the Pyeongchang Games. “The Olympics have made a fresh start possible.”

The 1976 gold medalist in fencing was referring to the presence of 22 North Korean athletes at the Games, the joint entrance of the Korean teams at the opening ceremony and the joint Korean women’s hockey team, which is to take to the ice in Pyeongchang. In these instances, sport has helped to build small bridges – but nothing more.

The Korean conflict remains a powder keg, which is still far from being defused. Any provocation from North Korean leader Kim Jong Un, or a poorly thought out tweet from US President Donald Trump, and this small seed of hope will be trampled into the dust.

Sport is not always a guarantor of peace

Sport is a universal language which is spoken and understood across national and cultural borders, so it does have the potential to mediate. But it also has its limits as a model for peace and, in fact, is often used as a platform for nationalism. Some nations, such as Russia with its doping system (by no means the only case in point) will go to any lengths to guarantee success that the country can bathe in.

Sport has even led to armed conflict, such as the 1969 “football war” between Honduras and El Salvador. The build up to the World Cup qualifier between the two nations was marred by rioting in which people were killed, setting off a military conflict which lasted 100 hours and cost the lives of more than 2,000 people.

We mustn’t overburden sport with false hope. The Winter Games in Pyeongchang are not going to save the world but they will hopefully provide us with exciting, hopefully fair competition, one or two emotional moments – and maybe a short period of peace. That would be a considerable success in and of itself.