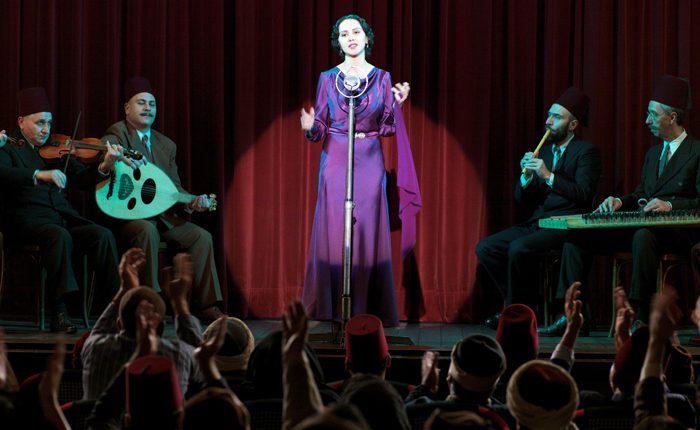 Forty-three years have passed since the death of Umm Kulthum, dubbed “the planet of the east”. However, she is still sitting on her throne as the most prominent female Arab singer. She is often referred to as “the fourth pyramid of Egypt”.

Umm Kulthum died on 3 February 1975. Thousands of voices appeared after her death in the Arab world in general and Egypt in particular, but no one has been able to replace Umm Kulthum’s position in people’s heart.

From “Amal Hyaty” (My Life’s Hope) to “Anta Omry” (You Are My Life), on to “Faat El Maad” (The Time Has Passed) and many other songs, whatever your mood is; you will find one of her songs that fits your mood.

Umm Kulthum songs were always filled with emotions, most of them dealing with love issues, while others involved themes of national pride and religion.

It was sad when she died, but no one could deny or forget her amazing songs; her legacy in the Arab music world has not been buried with her, but was revived through many ways, such as biographical films and series about her, as well as naming many streets, squares, and cafés after her, etc.

For decades, Egyptian audiences eagerly waited every first Thursday of each month just to see the curtains open, after which the musical band would begin with a melody that stirs feelings, meanwhile she would be sitting on her famous chair until it was time for her to sing, awaiting the musical introduction to end with a smile on her face and a handkerchief in her hand. Announcing the beginning of her elegant singing, people would feel that this is the planet of the east’s concert.

We have many concerts nowadays in which young people sing Umm Kulthum songs, but this scene has not been revived well except at El Sawy Culture Wheel, in coordination with Sono Cairo.

Umm Kulthum’s voice reappears again accompanied by the same old melodies in Cairo, in the form of marionettes or puppets, representing her and her famous band to bring her concerts’ atmosphere back to new generations of listeners through El Sawy Culture Wheel’s project entitled “Umm Kulthum returns”.

Mohamed El Sawy told Daily News Egypt that this project was his dream since his childhood.

He was always dreaming of seeing Umm Kulthum returning back to the stage and the people enjoying her concerts.

He explained that the project aims at reviving Umm Kulthum’s musical heritage by presenting her songs to her fans from all generations, with her original voice recordings and the original music and melodies.

He continued that at the beginning of the project, he was afraid that Umm Kulthum’s audience might not accept to see her in the form of a puppet, due to her great artistic status. However, he was surprised that the project succeeded in achieving its goal, which was reviving the musical ambience that Umm Kulthum created at her concerts.

Due to the increased turnout at the concerts, El Sawy decided to hold the same concert twice in one day day, which is the first Thursday of every month.

El Sawy explained that there is no intention to hold the concert more than twice a day in a month, as they want to match Umm Kulthum’s actual concert timing norms, which she used to hold on the first Thursday of every month.

In this context, he explained that the concerts witness great turnout, as all their tickets always become sold out a day before the concert, explaining that there are more than 500 people who attend the two concerts.

El Sawy pointed out the diversity of the audience, explaining that there are six generations that attend Umm Kulthum’s concerts, starting from six-year-olds and ending with 66-year-olds.

He said that he presented these concerts in many European countries and he was surprised by the feedback and the interaction of foreigners with Umm Kulthum’s songs.

Finally, he assured that there no intention to stop these concerts.

It is worth mentioning that El Sawy Culture Wheel celebrated, earlier this month, the 11th anniversary of the “Umm Kulthum returns” project.

The difficult role to be played in cinema and drama

The character of Umm Kulthum is one of the most difficult characters to be embodied or portrayed in cinema and drama due to her great status.

There are three female actors who took on her role in biographical films and dramas.

The first film is “Kawkab al Sharq” (The Planet of the East), which was directed by Mohammed Fadel in 1999, and the actor who played Umm Kulthum was Fardous Abdel Hamid.

The interesting thing about that film is the director and producers are not Egyptian, as the film is directed by the Iranian Sheren Nashat and is a joint production of companies and institutions from Germany, Austria, Italy, and Morocco.

Yasmin El Rayes told Daily News Egypt, that it took about three months for her to prepare for playing the role of Umm Kulthum in the film.

She said that the filmmakers focused on presenting the strong personality of Umm Kulthum and how influential she was, explaining that Umm Kulthum, in the film, influences the heroine, who is a director living in exile, making her decide to make a film about the life and art of Umm Kulthum.

Nashat, the director, follows the steps of the difficult journey of Umm Kulthum, reviewing the struggle and sacrifices that she made until she was able to cross the red lines of society, reaching the throne of art.

El Rayes stressed that the film also represents Egyptian history and its variability from 1920 to 1975, in the form of an interesting drama, not in the form of a documentary.

“When I wore the violet dress during the concert that was attended by the late president Gamal Abdel Nasser, in which Umm Kulthum sang “Anta Omry”, at that moment, I did not know myself completely and I felt that I was someone other than Yasmin, especially after wearing the dress with the makeup mask to show the advanced age of Umm Kulthum and the wig,” El Rayes said.

In terms of the scenes in the film that El Rayes sings on the stage, the actress said that she had intensive training sessions with the Tunisian composer Ayman Bou Hadh, who was responsible for the music and songs in the film, thus leading her to emerge strongly on the stage, in addition to Marwa Nagi’s brilliant voice when singing the songs of Umm Kulthum in the film.

“While I was preparing for the role, I read many articles about Umm Kulthum, I found that there was a very strange phenomenon that all the Arab countries sit beside the radio at a certain time of the month, and specifically on Thursday, waiting to hear only one voice, which is Umm Kulthum’s. So far, we still listen to Umm Kulthum and the next and future generations will also listen to Umm Kulthum, thus proving that she was a strong and rebellious woman and is indeed a phenomenon,” El Rayes said.

She continued, assuring that Umm Kulthum was a rebellious and courageous figure who could impose herself during an era in which power was usually reserved for men, making herself the dominant woman singer among many giant male singers over many generations, penetrating all the barriers in her eastern society.

Not only people revive Umm Kulthum’s history, but also the streets and the squares try to bring back the heritage of Umm Kulthum.

In Egypt, there is a street and a hotel by the name of Umm Kulthum in Zamalek, and there is also a museum named after her in Manial.

Moreover, there are many halls carrying her name at the Cairo Opera House, Arab Music Institute, as well as several life-size statues of her around the country.

Cafés in Egypt also try to revive not only the heritage, but also, the musical heights that Umm Kulthum always brought to her concerts, meaning that while you are sitting and drinking or eating, you are sitting listening to the songs of “the planet of the east” and the café you are in is decorated by graffiti and pictures of Umm Kulthum.

Among the most popular of these cafés are Café Umm Kulthum in Downtown Cairo and Café El Lord near Al-Hussein mosque.

Ahmed Aly, who has worked for more than 40 years at Café Umm Kulthum, told Daily News Egypt that there are many tourists who come to the café just to take photos with the decorations in it and to see the photos of Umm Kulthum displayed.

He explained that he was surprised that tourists come to the café and know well the value of this artistic giant, despite the language barrier.

Surprisingly, there is a café named Umm Kulthum in every Arab country and even in some European countries.

For example, in Malmö, Sweden, there is an Umm Kulthum-themed café where Arabs sing her songs.

In Paris, there are dozens of Arab cafés that may not be named after “the planet of the east”, but are keen to spread Arab spirit by playing the songs of Umm Kulthum to spread a sense of Arabism and break the sense of alienation that Arabs residing there may have.

In brief, she is an authentic Egyptian symbol in all the countries of the world, from Tunisia, Morocco, Syria, Lebanon, Morocco, and Iraq to Paris, London, and Malmö.

Earlier in 2012, Israel inaugurated a street named Umm Kulthum, a matter that was received negatively by the Arabs on social media.

However, naming a street in Israel by the name of Umm Kulthum is proof for the whole world that traditional Egyptian art will continue to reflect human feelings everywhere.

Nilometer serves as a memory of past floods, encourages efforts to preserve the Nile