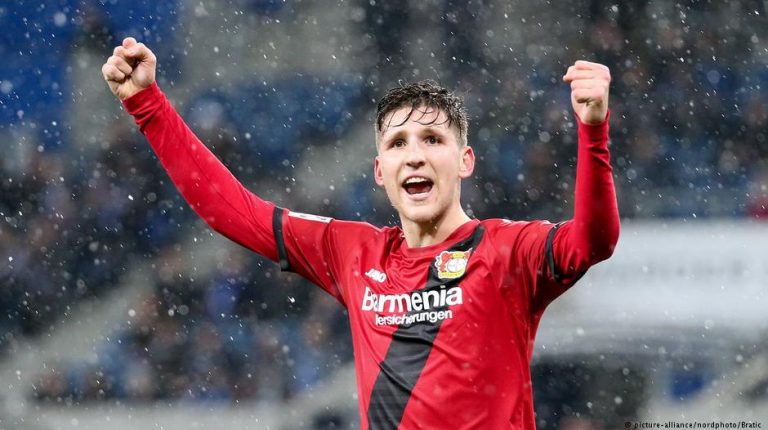 Leon Bailey’s performances may have torpedoed Bayer Leverkusen towards the top end of the Bundesliga this season, but the rise of Greek teenager Panos Retsos has gone under the radar. DW meets the 19-year-old defender.Panos Retsos joined Leverkusen from Olympiakos last summer for a hefty £15.75 million, making him one of the most valuable teenagers in the world. He has made 14 Bundesliga appearances this season and has been a vital cog in one of the Bundesliga’s better defences.

“I like the Bundesliga,” Retsos told DW. “You hear it is a very strong and quick league, but every team has four of five players that could be top players. It’s something very impressive for me. At Leverkusen we have many young players, and I think we can do more in the future.”

Read more: Kevin Volland exclusive: ‘A relegation battle is not what this club expects’

It’s youthful exuberance that has fuelled Leverkusen’s rise to second in the Bundesliga and the best of the chasing pack behind Bayern Munich. Retsos has played in both central defense and at full-back this season, and he’s one of many young players that are inspiring Leverkusen to better things under coach Heiko Herrlich.

“I’m at the perfect club,” Retsos says . “The young players here have the opportunity to play without stress, without fear of making a mistake. It’s something very good for us and any mistakes we make, makes us stronger.”

Retsos remembers the moment he got the call that Leverkusen were in to sign him. “It was the morning when I was with the Greek national team and found out that Leverkusen wanted me. I took only three or four hours to consider and accept the offer. I knew it was a special opportunity and I couldn’t reject the offer. It all happened really fast,” he says.

Retsos has been superb for Leverkusen and couldn’t have hoped for his debut season in Germany to go much better. But the undeniable shining light at BayArena this season has been Bailey, and Retsos believes the Jamaican is destined for bigger things.

“This kid has a lot of years to do good things. I really like Leon – he’s so talented and can play in the best club in the world. He must concentrate and be down to earth, and not listen to the hype that surrounds him. I want him to get better.”

Leverkusen are eyeing a Champions League place this season and Retsos has warned against the team taking their foot off the gas, given the intensity of competition in the chasing pack this season in the Bundesliga.

“We must be very careful. This season is very unusual where they can go from second to sixth in one game. We all want Champions League football of course, so whether we play Bayern Munich, Borussia Dortmund or Freiburg we have to be 100 percent concentrated.”

His secret weapon is his maturity, which belies his age. He wore the captain’s armband for Olympiakos at just 18, already has four caps for Greece and is highly thought of at Leverkusen, whose stable of young stars continue to light up the Bundesliga this season.

With a German Cup semi final on the horizon and Champions League football within their grasp, Retsos seems destined for bigger and better things.