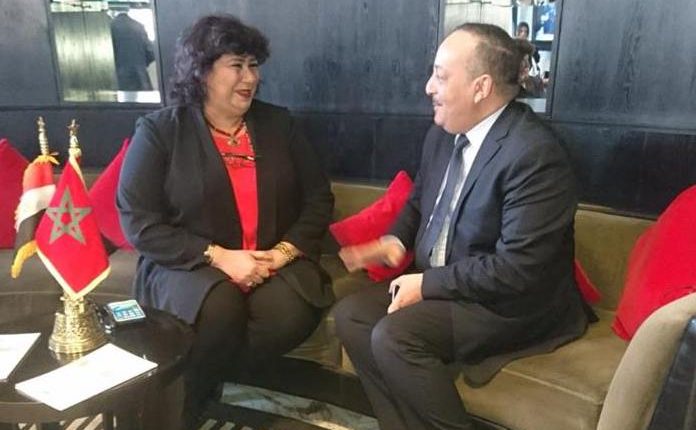 During the same week when the Cairo International Book fair ends, Egypt will participate at the 24th International Moroccan Book Fair as the honourary guest. Minister of Culture Inas Abdel Dayem travelled to Casablanca on Thursday, among a group of writers to open the book fair which kicked off on 8 February and wil run until 18 February, according to a statement published by the Ministry of Culture’s official Facebook page.

Abdel Dayem said that the ministry has prepared a rich programme showcasing a large part of Egyptian civilisation, asserting that the programme stresses the strength of the Egyptian-Moroccan relationship.

She added that among the participating books are some that tackle the history of political and social relations that Egypt shares with Morocco, features of storytelling from both countries, and research on the writing of short stories.

Abdel Dayem met with Moroccan Culture Minister Mohammed Laaraj and the two spoke of how to enhance the dual relation between the countries.

These activities come alongside literature and poem workshops, as well as artistic shows that reflect Egyptian culture.

The 24th International Moroccan Book Fair is hosting 700 participants from 45 countries, as well as 350 researchers from all over the world.

Cyber jihad and cyber terrorism: A real threat to governments