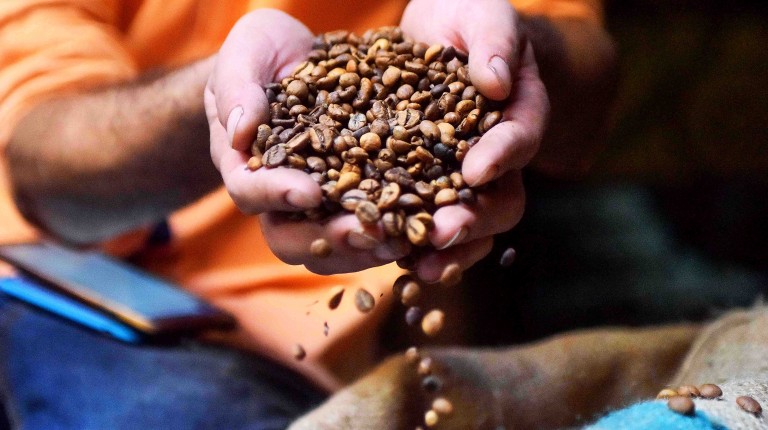 With prices of coffee hovering around their lowest level in more than two years, this could be the best time to drink your cup of coffee amid a supply glut that is expected to last for at least two harvesting seasons.

Coffee, which is regarded as the most important export commodity after crude oil, has been in a downward trajectory since the end of 2016, with futures extending their decline touching their lowest level in almost 48 months, according to data compiled by Bloomberg.

More than 100 million people earn their living from the production and processing of coffee and many countries in the third world depend entirely on the coffee trade.

Although there are many different varieties of coffee plant, only two species are of major economic importance.

These are Coffea arabica and Coffea robusta. Today, more than 60% of the world’s coffee output is produced from arabica beans.

The arabica bean is in considerably higher demand than Coffea robusta.

Coffea arabica originates from what is now Ethiopia, whereas the robusta bean comes from Indonesia and can be cultivated even at heights of between 200 and 600 metres above sea level.

In recent years, world production has increased further from 90m bags to 100m bags, and Coffea robusta accounts for around 40% of this.

In 2005, around 28.2% of the world’s harvest of green coffee beans came from Brazil, making the country the world’s largest coffee producer.

A recent survey conducted by Bloomberg found that there are expectations for top grower Brazil to harvest a record crop of 60m 60-kilogram bags, made up of 44m bags of arabica and 16m bags of robusta.

Estimates ranged from a total of 55m to 65m bags.

Brazil’s government agency Conab forecast the country will grow between 54.44m and 58.51m bags in 2018, which would be a record.

Vietnam, the world’s biggest grower of robusta, was forecast to harvest 28.5m bags of coffee in 2017-18, with estimates ranging from 27m to 30m bags.

The most important trading venues for coffee are the London International Financial Futures Exchange, the New York Board of Trade, the Bolsa de Mercadorias & Futuros, and the Tokyo Grain Exchange.

ABN AMRO Bank said in a recent research paper that the price of robusta was depressed, mainly due to the good harvest in Vietnam.

“Favourable weather conditions (dry and sunny) led to an excellent harvest in the world’s second-largest coffee-producing country and exports rose as well. This pushed down the robusta price,” the ABN AMRO paper said.

“The reports from Brazil, the world’s biggest coffee producer, were less positive. Coffee exports there lagged behind expectations,” the paper continued.

“The 2017-18 season ending in June is an off-year,” the paper added. “This means lower [production], while demand is expected to continue growing.

“Prices will rise as a result, but only to a limited extent as 2018-19 will be an on-year with all the signs pointing to a record harvest in Brazil,” ABN AMRO Bank said.

For another research house called Cepea, the favourable climate for the development of the 2018-19 crop in Brazil, and it being an “on” year in the cycle of alternate higher and lower production years, should result in similar or even higher production than the 2016-17 season.

“In this scenario, domestic and external coffee prices may be pressed in 2018,” Cepea said in a research note.

“Besides the positive biennial effect, rains since October have been more generous, allowing the setting of cherries and the beginning of filling in some regions,” Cepea added.

The research note further said, “for arabica, despite initial concerns with flowering, which were hampered in September by the drier climate, the return of rain in October has favored crop development.”

“In relation to robusta, especially in Espírito Santo,” Cepea said, “the more favourable climate in the last months of 2017 allowed the recovery of the coffee plantations, which had been damaged by the drought of previous years.”

Meanwhile, Citi Bank analysts wrote in a recent research note, that they expect global production to post around 152.5m bags in 2017-18, down by 1.4m year-over-year, driven by Brazil and partly offset by gains in Vietnam and rest of the world.

“The ratio between arabica and robusta should back-up slightly from last year to about 60-40. Demand growth is expected to remain stable at 1.3-1.5% per annum evenly distributed between importers and exporters on average,” Citi said.

“As long as weather co-operates in Brazil,” Citi continued, “the world could potentially see a pause from the five-year long coffee deficit cycle and with near perfect weather, we could even potentially see global balances lifted to surplus.”

“Nevertheless, as we are still expecting a circa 3.6m-bag deficit globally in 2017-18, we still have a neutral-to-bullish outlook for 2018,” Citi said.

“Short-term, early harvest supply is expected to be slow this year in Vietnam and Colombia due to rainfall. Together with the likelihood of money manager short covering, we are expecting to see prices recover through the first quarter of 2018,” Citi predicted.

“For the full year, we set our 2018 annual price outlook for ICE coffee at 135 cents a pound… expecting stable prices in 2019,” Citi analysts said in the research note.

Commerzbank said in a recent note, “there is widespread consensus that the coffee market is likely to slide back into deficit in 2017-18, which should actually have a price-supportive effect.”

“That this is not happening is down to the fact that… attention is already turning to the prospects for the next crop in Brazil. In the case of arabica [it] will be a high-yield year in the two-year cycle. Robusta is also expected to recover after two weak years,” the Frankfurt-based Commerzbank said.

“The price is also likely to be influenced by the fact that coffee stocks in the consumer countries, above all in the US and the EU, find themselves at a high level—indeed at an eight-year high according to the International Coffee Organization,” Commerzbank added.

The banking and financial services company went on to say, “the weakness of the robusta price could continue for a while as a result of the high Vietnamese crop, while the prospect of a better 2018-19 crop in Brazil is also unlikely to justify any strong price rise for the time being.”

“Particularly the weather in Brazil is likely to strongly influence coffee price trends in the coming months, too,” Commerzbank predicted.

“We believe that the risk is more on the upside—namely if weak export figures and unfavourable weather reports trigger a shift in sentiment which, supported by reshuffling of positions on the part of short-term-oriented market participants, could cause a price surge,” Commerzbank said.

Goldman Sachs said that the recovery in production from the 2016-17 drought, which negatively impacted Brazil’s robusta production, has resulted in a substantial moderation in prices.

“The two main drivers behind our view are: first, stronger global growth in 2018-19, as well as continued rotation towards the consumer in key emerging markets such as China; and secondly, stabilisation of the Brazilian real exchange rate versus the US dollar and energy prices,” the American finance company said.

The last research house here is Société Générale, which wrote in a recent research note that they

“If our largest upside price risk (adverse weather in Brazil) prevails, we could see the arabica coffee price moving in the 135-145 cents a pound range,” the French company added.

“Should the largest downside risk (favourable weather in Brazil) prevail, we may see prices move in the 110-120 cents a pound range,” Société Générale concluded.