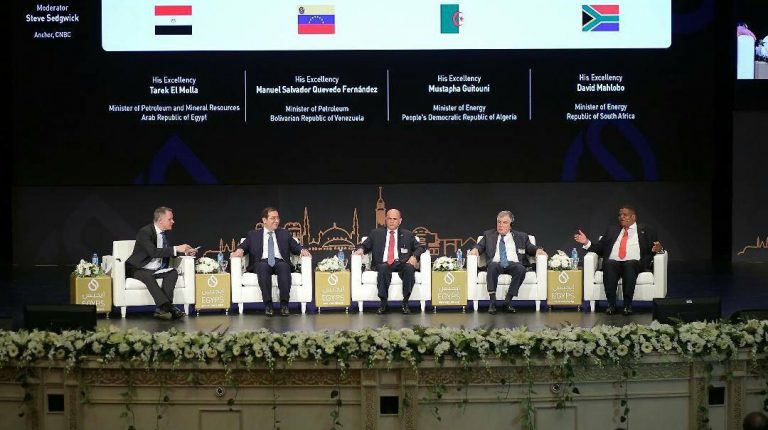 The 2018 Egypt Petroleum Show (EGYPS) started on Monday and was inaugurated by Egyptian President Abdel Fattah Al-Sisi. The opening ceremony initiated with a speech from secretary general of the Organisation of the Petroleum Exporting Countries (OPEC), Mohammad Barkindo.

“The new discoveries will position Egypt as a global player in the oil and gas industry, and I believe that the best has yet to come for the industry globally.  Oil and gas will still contribute to 52% of the global energy mix by 2040,” Bakindo said.

He added that Egypt contributed a very important role for the OPEC and that Egypt’s Minister of Petroleum and Mineral Resources Tarek El-Molla played a huge role as a mediator in the OPEC talks that took place in Geneva in 2016, where the OPEC deal to control crude oil production was reached.

On the other hand, El-Molla said that EGYPS 2018 is just a step towards more successes for Egypt’s energy sector and that the ministry will focus on four main axes in the coming period, and that in 2017 only, the ministry managed to increase Egypt’s gas production by almost 40%.

The four main pillars are improving the quality of the gasoline currently offered, signing a memorandum of understanding with international oil companies to establish an information gate for all the exploration and production (E&P) information, development of the already existing companies in order to increase their efficiency and improve their governance, and finally, completing the seismic survey of the Gulf of Suez, which would not be possible without the agreement between Egypt and Saudi Arabia.

“We are strictly committed to paying all the international oil companies their arrears,” El-Molla emphasised.