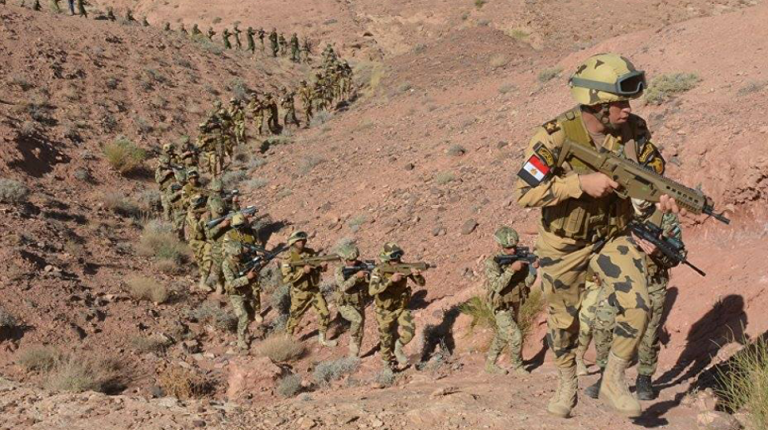 More operations are targeting militants in North Sinai, as part of the extensive armed operation Sinai 2018 which started last Friday, with the latest raids killing 15 militants, raising the campaign’s death toll to 53.

Military spokesperson Tamer El-Refaei said that air forces have destroyed 11 sites that were reported to have been dens for militants. He added that a number of C-4 explosives have been found and confiscated. Also, 56 detonators were found, and 38 hideouts and tunnels were destroyed.

He also stated that 153 individuals were arrested, some of whom are foreigners.

The spokesperson added that troops have set up 563 checkpoints on main roads. In the process, a militant was wounded while five others were arrested.

Previously, El-Refaei mentioned that the forces of the Second and Third Field Armies also destroyed bomb stocks, four-wheel drive vehicles, and motorbikes. According to the statement, military forces destroyed a lab for preparing explosives and a media centre that was used by militants.

Security experts anticipate that the Sinai 2018 operation will be different from previous operations due to its wider scale and the large amounts of personnel and armaments used.

Sinai 2018 comes as part of the Egyptian state’s plan to fight terrorism in the Sinai Peninsula. In November 2017, Al-Sisi vowed to restore stability by eradicating terrorism, placing the military and police in charge of completing the task within a period of three months. This had followed a massive first-of-its-kind terror attack on a mosque in Al-Arish city, killing at least 305 citizens.

On Sunday night, “Sinai Province”, a group previously known as Ansar Beit Al-Maqdis who swore allegiance to the Islamic State group in 2014, published a propaganda video showing attacks against military vehicles in Sinai. The video vowed more attacks against the Egyptian military.