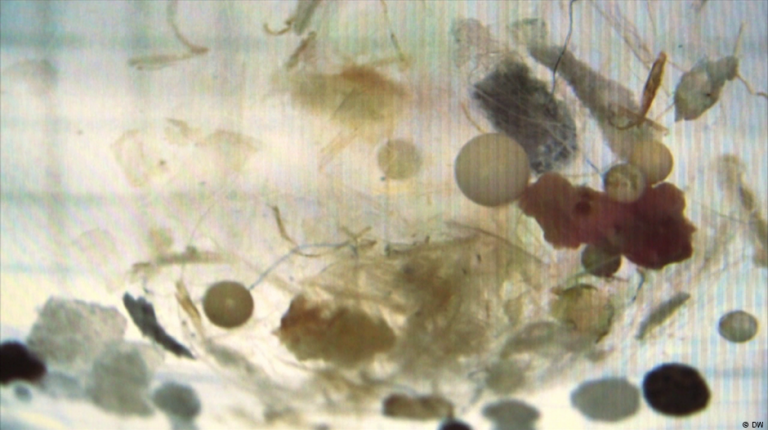 Seven ships left Alicante, Spain, in October 2017 and are racing around the world, scheduled to finish in the Netherlands in June 2018. The Volvo Ocean Race has been taking place every three years since 1973, but this year one of she ships is quite different. Named ‘Turn The Tide on Plastic,’ it is collecting research about microplastics in the ocean along the way. And what it has collected so far is alarming to researchers.

As it left Spain and started it journey, its instruments detected a high degree of microplastics.

“That was not surprising, to see a higher number of microplastics close to the coast,” Sören Gutekunst, the researcher who is analyzing the samples at the Geomar Helmholtz Centre for Ocean Research in the northern-German city of Kiel, told DW. “But then as it got into the Southern Indian Ocean, the increasing values were surprising.”

The ship detected microplastic particles at high volumes of 42 particles per cubic meter, at a latitude of 45.5 degrees south — further from land and deeper than they’ve ever been detected before. The findings suggest the microplastics are speading further and faster than previously thought.

Microplastics are plastic particles smaller than 5 millimeters, either purposefully manufactured or the result of larger plastics breaking down. They are invisible to the human eye but end up in rivers and oceans, damaging the environment. These plastics are so small they can even enter our lungs through the air we breath, and our stomachs through the food we eat.

Last month, the European Commission proposed a strategy to reduce their use in the European Union by making them subject to mandatory registration. The Commission is also looking into other options to reduce their use, such as mandatory labeling, minimum requirements for product design and durability, methods to assess quantities and pathways of microplastics in the environment, and funding for targeted research and innovation.

The biggest problem with microplastics is that they remain such a mystery. Because they are invisible to the human eye and difficult to detect, not much testing has been carried out on them. The EU wants to determine how much plastic is out there in the environment, and whether it poses a health risk to humans who might ingest it.

“There is no conclusive evidence that they pose a threat to water supply, but we want to be on the safe side,” said the Commission’s First Vice President Frans Timmermans. “If it is established through monitoring that microplastics pose a threat, water suppliers will have to act and make sure they don’t pollute tap water.”

Research on microplastics in oceans is still at a very early stage, with scientists currently able to identify only one percent of the plastic they believe is in the ocean. Because microplastics are so small, they are difficult to measure.

Gutekunst said the Turn The Tide on Plastic is the first ship in the Volvo Ocean Race to be collecting this data, which will bring new information about microplastics in these remote ocean regions.

“With this information we’ll have more comparable data with one single system, we can compare the Indian Ocean to the Atlantic and the Pacific,” he said. “This to my knowledge has never been done in such a short period of time with the same system.”

The boats are currently racing from Hong Kong to New Zealand. From there they will sail across the Pacific to South America, and Gutekunst says he will be keenly watching to see if they come across the famous Pacific Garbage Patch.

“We will be in the Southern Pacific so we are far away from it,” he said. “But there are currents that can take it very far, and there might be the possibility that we measure low values of microplastics in very remote areas.”

Gutekunst hopes that by the time the boat pulls up in the Hague, it will have collected valuable information to combat the problem of plastic marine litter. While the Turn The Tide on Plastic is unlikely to win the boat race, it may help win the race to stop ocean pollution.