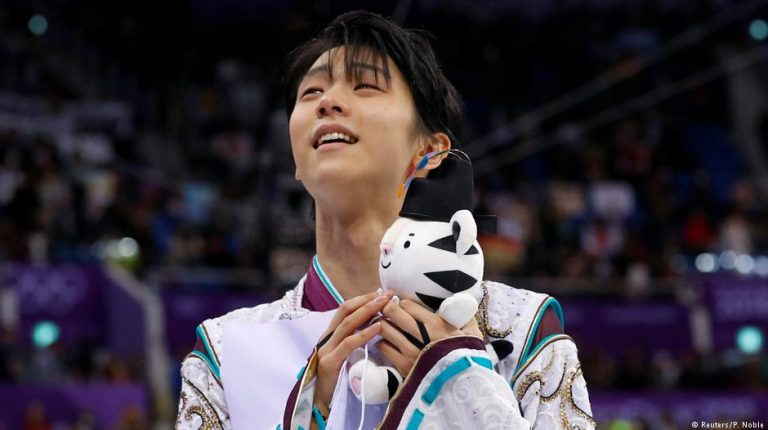 A three-month layoff had cast doubts over Japanese skating star Hanyu’s appearance at the Olympics. But the “Ice Prince” became the first man to win back-to-back Olympic gold medals in men’s singles since 1952.Defending champion Yuzuru Hanyu underlined his status as the greatest figure skater of his era after clinching gold in the men’s singles on Saturday. Not since Dick Button in 1952 had a skater won back-to-back Olympic golds in the discipline.

“Just happy. I can’t say anymore, just happy,” Hanyu said through his ever-present smile. “I just did my best today. I don’t know if this is the best of my skating life, but I can say from my heart that I skated my best today.”

His 2014 victory in Sochi made him a cult figure in Japan, with an army of fans following him wherever he goes and showering him with Winnie the Pooh soft toys.

His supporters were out in force in Pyeongchang and Hanyu did not disappoint. It was not a flawless performance, one combination jump in particular almost tripped him up. His free skate routine was a joy to watch however, and gave him a combined score of 317.85 to give him a cushion of almost 11 points over his Japanese compatriot Shoma Uno (306.90) and six-time European champion Javier Fernandez (305.24).

“I know I didn’t do the perfect programme but I was satisfied with what I did and it got me an Olympic medal,” Fernandez admitted. “I’ve been dreaming about it and it’s been a big goal for me. I knew it was going to be my last Olympics so it’s true that I was a little bit more nervous than on Friday.”

That skate on the previous day’s short program was Hanyu’s first in over three months. A knee injury had kept him out of training and cast doubts he would even be able to take part in the Games.

“I worried a lot of people as I could not practise because of my injury. So there was stronger support than before,” he told Japanese broadcaster NHK. “I was so fortunate. I’m feeling gratitude. I was able to make a jump that I wanted to do with concentration.”

Hanyu was almost upstaged by 18-year-old US skater Nathan Chen. The teenager pulled off a sixth quad and the loop to set an Olympic free skate record of 215.08 points. His poor performance the day before, however, left Chan in fifth overall.

The plaudits went to the Japanese in the end, marking the culmination of an incredible journey from having to flee an ice-rink in the earthquake of 2011, to the highs of gold in 2014 and the lows of his recent injury crisis.

Not only did Hanyu secure the first consecutive men’s singles figure skating golds in six decades, his was the 1,000th gold medal awarded in Winter Olympics history.