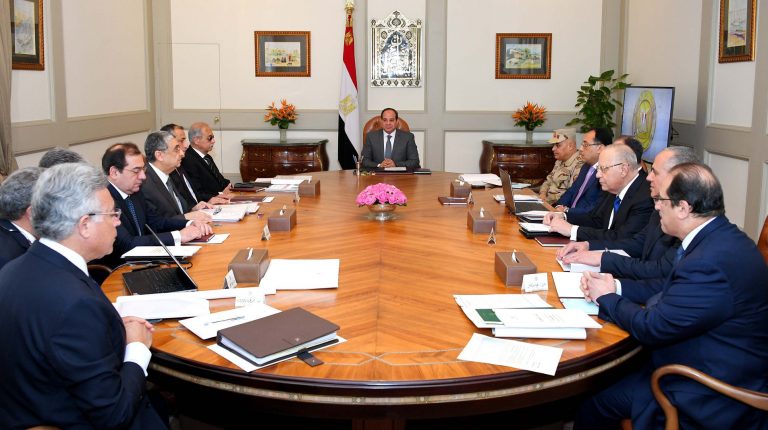 President Abdel Fattah Al-Sisi held a meeting on Sunday with several ministers to review updates on the security operation Sinai 2018, according to presidency spokesperson Bassem Rady.

Al-Sisi reviewed during the meeting the developments of the comprehensive military operation that came to confront terrorism across the nation.

The review covered what has been accomplished so far, within the pursuit and elimination of terrorist elements and sites, and the destruction of large numbers of hideouts, stores, and weapons used by terrorist groups.

The president praised efforts the armed forces and police exerted to protect the homeland and citizens “with sincerity and dedication” and pointed out the necessity of all concerned bodies continuing these joint efforts to ensure the full implementation of the objectives of the military operation.

Last week, Egypt’s military spokesperson Tamer El-Refaei announced launching the comprehensive operation Sinai 2018, which includes plans to confront terrorist and criminal elements and organisations in central and North Sinai, and in other areas in the Nile Delta and desert areas west of the Nile Valley. The Egyptian military is publishing daily updates on the operation in Sinai, which involves all branches of the Egyptian Armed Forces, including infantry, naval, and air forces, as well as police and border guards.

The meeting was attended by Prime Minister Sherif Ismail, Governor of Egypt’s Central Bank Tarek Amer, the head of the Administrative Control Authority, and the head of Military Intelligence Service, as well as a number of ministers.

In this context, the president stressed the need to continue the integrated implementation of the economic reform programme in order to achieve the sustainability of the positive results achieved by the Egyptian economy in recent years, particularly in terms of increasing growth and employment, reducing the budget deficit, increasing the trade balance, and controlling inflation.

The meeting also reviewed the executive position of a number of national projects being implemented in various sectors, including oil, housing, airport development, and projects for the development of electricity distribution, transmission networks, and control rooms, as well as electricity interconnection with neighbouring countries.