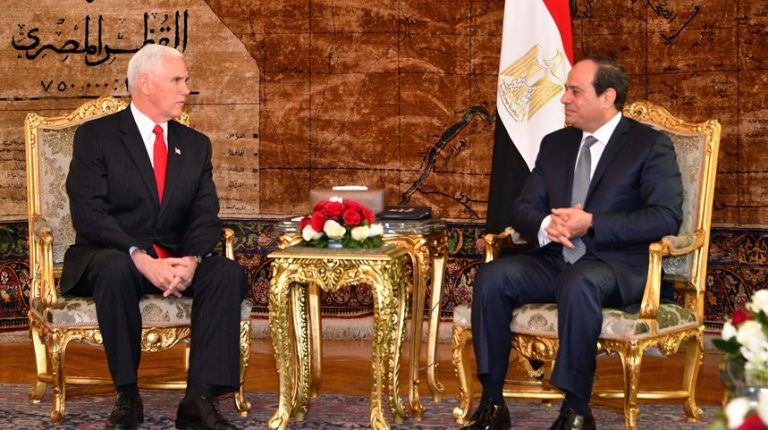 Not long after the US became an outcast within an international community following Donald Trump’s Jerusalem declaration, Egyptian President Abdel Fattah Al-Sisi sat with top US officials in Cairo.

Both US Secretary of State Rex Tillerson and Commander of the United States Central Command (CENTCOM) General Joseph Votel were received by Al-Sisi last week, preceded by the visit of Vice President Mike Pence in January, which was previously postponed due to rejection voiced by the country’s Muslim and Christian top clerics.

According to Egypt’s presidential statements, the meetings emphasised strengthening and further advancing strategic relations, US support to Egypt in fighting terrorism, which in turn is seeking to forge closer economic cooperation and increase American investments in Egypt.

The Palestinian issue was also on the agenda and according to the Egyptian presidency, Al-Sisi reiterated in his meeting with Tillerson his “clear and unwavering position with regard to reaching a just and comprehensive solution that ensures the rights of the Palestinian people and the establishment of their independent state along the 1967 borders with East Jerusalem as its capital.”

Egypt was no ordinary opponent to the decision to recognise Jerusalem as Israel’s capital, at least publicly. It pushed for a UN resolution calling on the US to reverse its decision, which although widely supported in the UN Security Council and the General Assembly, is not binding for the US.

Earlier in January, Egypt slammed a New York Times report which suggested its “tacit acceptance” of the US’ Jerusalem move.

Yet, Al-Sisi affirmed during talks with Tillerson and Pence that the US had a vital role to play, as the key sponsor of the Middle East peace process, and shall revive and push forward the negotiating process in line with international resolutions.

Relations between the US and Egypt have not always been at their best but despite tensions, are they currently kept at minimum diplomacy considering ramifications at stake in the region?

The Egyptian presidency said that the meeting with Votel focused on further advancing and promoting military cooperation between Egypt and the US. His visit comes as Egypt launched a massive military operation in North Sinai after struggling to put end to attacks on its personnel, police forces, and civilians for four years with extremist and the Islamic State (IS)-affiliated group, “Sinai Province”.

“Egypt is an important partner of the US in the Middle East and is designated as a non-NATO ally of the US-led coalition against terrorism. It is not surprising therefore that Tillerson made Cairo his first stop during the crucial Middle East trip. Although it appeared that he may have been slightly reluctant to promise Washington’s continued cooperation with Cairo on counterterrorism measures, Tillerson eventually assured the Egyptian people of the US’ steadfast commitment in Egypt’s fight against terrorism,” wrote Zhou Rong for the China Global Television Network.

In his commentary published on Thursday, the professor at the Chongyang Institute for Financial Studies of Renmin University of China pointed out that despite pursuing economic support from the US, Egypt is keen on maintaining military relations with the Russians.

In fact, the next day after Tillerson’s meeting, Al-Sisi received Russia’s Director of Foreign Intelligence Service Sergey Naryshkin‎, where the two noted the importance of security cooperation between the two countries to face the threat of terrorism and discussed ongoing crises in the Middle East.

According to Zhou Rong, Egypt’s reliance on Russia is one of several sources of US discontent, which also include concerns about violent oppression of the opposition and cracking down on civil society and journalists. Tillerson would therefore make “rhetorical promises on the recovery of Egyptian economy but made no substantial offer for concrete funds and it is unlikely that the US would fully compromise its policy towards Egypt,” he wrote.

Tillerson did express concerns while in the country during a press conference held with Egypt’s minister of foreign affairs, saying: “We also discussed the importance of the protection and promotion of human rights and the vital role of civil society in Egypt. With the presidential election planned for the end of March, the US, as it does in all countries, supports a transparent and credible electoral process, and all citizens being given the right and the opportunity to participate freely and fairly.”

The FBI have been investigating Russian meddling with the 2016 US elections and possible links to members of Trump’s campaign. Special Counsel Robert Mueller indicted on Friday at least 13 Russians in the case but the indictment dismissed that election results were impacted and did not contain any allegations that any Americans knowingly participated in the activity.

In her article published Thursday in the local Al-Masry Al-Youm, Abdalla argued that the US would rather maintain positive relations with a stable country like Egypt, despite opposing its administration, amid crises rising in other countries in the region.

However, she did not turn a blind eye to tensions. Last summer, the US denied Egypt $95m in aid to Egypt and decided to withhold another $195m, citing setbacks in democracy and the respect of human rights.

Before that, the celebrated meeting between Al-Sisi and Trump did not translate into support of Egypt’s economy and investments, a major pursuit for the Egyptians, according to Abdalla. Yet, the US has an interest in keeping Egypt essentially as an ally in the Palestinian issue and the recent visits reflect the desire to maintain the minimum possible areas of common interests.

On a different issue, Heather Nauert, spokesperson for the US State Department responded in a press briefing in August to a question regarding Egypt’s dealings with North Korea.

“We have conversations with Egypt and many other countries around the world about the need to isolate [North Korea], and we do that because we recognise that countries around the world that do business with North Korea enable money to go into [its] illegal nuclear and ballistic weapons programs. We have a deep and multifaceted relationship with the country of Egypt, we have a lot of areas of close cooperation, but [North Korea] overall as a broad matter is a big concern to the United States,” Nauert stated.

Asked on the same topic during the press briefing with Tillerson, Shoukry said the issue was discussed with Tillerson and that Egypt’s diplomatic ties with North Korea were limited to representation but no economic or “other areas of cooperation.”

Shoukry added that there were concerns about the security of the Korean Peninsula “with the current status with the threats emanating from the proliferation of nuclear weapons, a situation which we deem as threatening to the global non-proliferation regime, one that has to be dealt within our maintaining global security, also the threats of ballistic missile systems to South Korea and to Japan.”

On the Middle East, political expert Tarek Fahmy told local media that Egypt’s firm stance on the status of a Palestinian state is source of conflict with the US.

Egypt’s Al-Sisi called on the US, as the key sponsor of the Middle East peace process, to push the negotiating process in line with international resolutions.

But Palestinian rhetoric is more aggressive towards that role. In an initial reaction to Trump’s declaration, Palestinian leaders, including President Mahmoud Abbas, said they no longer considered the US part of peace negotiations.

Chief Palestinian negotiator and top PLO official Saeb Erekat stated in an opinion peace for the New York Times on Tuesday that Trump has sided with the Israelis, dismissing international laws and thus disqualifying the US from being the sole broker in peace effort.

“If [Trump] administration’s inability to be an honest broker opens the way for other parties to become mediators, Palestine can engage in meaningful discussion on a just and final peace…Only an international effort can address the unequal power balances, uphold international law, and present a clear future of hope, freedom, justice, and peace,” Erekat concluded.

With regards to military aid to Egypt, which the US had decided to delay, Egypt’s Foreign Affairs Ministry spokesperson Ahmed Abou Zaid asserted in TV statements following Tillerson’s visit that the US administration is keen on allocating the full $1.3bn annual military aid to Egypt.

According to Washington-based journalist Mohamed Al-Menshawy, specialised in US affairs, Egypt-US military cooperation is stable and not undermined by Egypt’s varied sources of arms purchase as it still relies on the Americans.