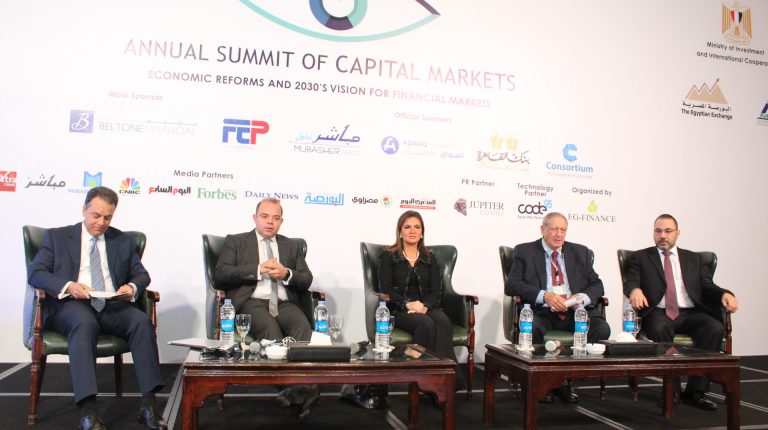 Preparations for the state-run initial public offering (IPO) programme are underway in full swing and it is expected to launch next April or May, Sahar Nasr, minister of investment and international cooperation, said on the sidelines of the Annual Capital Market Summit that kicked off on Tuesday.

The benchmark EGX30 index has hit 15,000 points and trading volume increased to EGP 1.2bn per day, up from a daily average of EGP 500m before, he indicated.

The top official highlighted that trading volume amounted to about EGP 2.2bn in 2007/2008.

Farid said that, first, state-owned Banque du Caire will list its shares in the first quarter of 2018 as part of the government’s plan to sell partial stakes in state assets to strengthen the stock market and attract investors.

Egyptian Financial Group Hermes Holding (EFG Hermes) and HSBC are the consultants for the offering.

Second, Misr Italia Holding is following through with its plan to float 20-30% of its shares on the Egyptian Exchange, denying rumours about a delay.

Beltone Financial Holding (BTFH) is advising Misr Italia and is the bookrunner of this potential EGP 1.5bn IPO, which is earmarked for expansions.

Third, El Garhy Steel Group plans to float 25% of its shares during the first quarter of 2018, raising EGP 3.6bn to finance its $200m pelletising plant and $250m smelting and rolling plants. The IPO is managed by an unnamed local investment bank

At least six companies plan IPOs by the end of 2018, following two sales since January, according to data compiled by Bloomberg.

That is a marked increase on the average of three in the past three years, as foreign investors fretted that a severe dollar shortage would trap their money.

Between 2011 and 2014, there were no IPOs at all as the aftermath of a popular uprising destroyed the conditions for listings. The turning point came in November, when authorities removed almost all restrictions on the pound to help end the hard-currency crunch and secure a $12bn loan from the International Monetary Fund.

Past attempts to bring large government companies to the market have proven complicated and time-consuming. Telecom Egypt was the last state-owned company to sell shares to the public more than a decade ago.