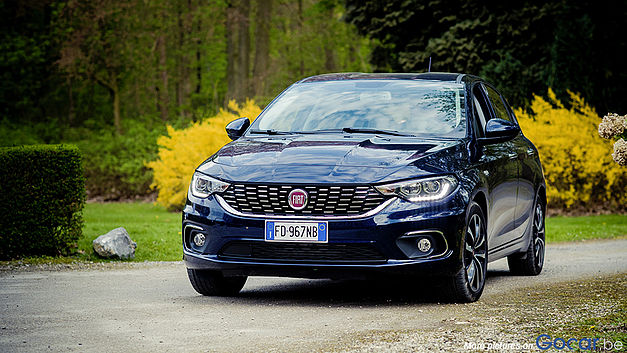 Fiat Tipo is not a new name for Egyptian streets. It dates back to 1988, when Fiat launched the first version of Tipo that won the European Car of the Year award a year later.

The car was then designed by Italian Ercol Spada, who designed some historical icons such as the BMW E34 and E32, the Ferrari FZ93, and the Ford GT70.

This model has gained worldwide popularity, especially in Brazil, but it has not succeeded on Egyptian streets like the previous Fiat models, which are still popular among young people, such as the 127 and 128.
The Tipo was produced in Turkey in 2015 by the same Tofas manufacturing firm in three body styles: sedan, hatchback, and wagon.

The new model has different names depending on the country or region in which it is launched. It is called Tipo in Europe and parts of the Middle East, while it is called Egea in Turkey. Interestingly, the Tipo is also sold in Mexico as a Dodge Neon sedan.

Daily News Egypt conducted a test drive with a Fiat Tipo to preview the vehicle’s features and suitability for the nature of the local market.

The Tipo’s exterior design style is simple. The front is dominated by the chrome-embellished mesh grille housing a distinctive Fiat emblem. Its size is what angered some consumers, with some arguing it is too large, while others said it was suitable for the grille. However, many wished the Tipo could be marketed in Egypt as a Dodge Neon. As mentioned before, the Dodge Neon-branded sedan’s grille was different. It was largely inspired by the design of other Dodge models, such as the Charger and Dart.

Tipo features a simple design on the hood with two form lines running from the headlights to the sculpted tail lights. The headlights are characterised by a sharp design that fits the car’s shape, but it lacks LED lighting.

Fiat Tipo is available as a five-door hatchback and as a station wagon. The doors come in a smooth design topped by a sharp line from the beginning to the end of the car, but when looking at the car’s flaps, there is a large space between the tires and flaps, which may spoil the appearance of the sides. This space aims to make the car higher from the ground, but we believe that 17-inch tires could be used instead of 16-inch tires. Tipo provides exceptional service to its customers as the company uses run-flat tires, and replaced the spare tire with an air compressor for tires.

The design of the side mirrors is unique and sharp. They are ordinary mirrors, not automatic, though.

On the back of the sedan, Tipo comes with simple and unique C-shaped rear lights that makes it easy to identify the car on the road. The trunk comes with sharp lines in line with the car’s design, with a capacity up to 520 litres of luggage.

One of the most noticeable features of the engine is its noiseless idling. It offers a very zippy and energetic, yet smooth, ride around town. It effortlessly switches between its six gears. Tipo features a four-cylinder 1,600 cc engine with 110 horsepower at 4,500 rpm. It has a six-speed automatic transmission with a maximum speed of 190 km per hour (km/h). The engine fuel consumption reaches 6.2 litres per 100 km. Tipo dashes from a stop to 100 km/h in 11.2 seconds.

The interior of the car has a very simple design. The dashboard has glossy black accents, with the steering wheels and gear knob featuring the same double stitching as the seats. Tipo adds a leather-trimmed steering wheel that makes all buttons easily accessible.

Built on the same small wide platform as the Fiat 500x, Tipo provides a large space in the car, with a stunning 150 mm height above the ground.

The car is also equipped with tight turning circle diameter of 11 metres, which allows the car to turn only in 11 metres, ending the problem of those who have difficulty with turning in narrow spaces.

Tipo is one of a few cars that achieved a four-star rating in the The European New Car Assessment Programme for safety regulations. It offers modern active and passive safety features such as standard, driver, and front passenger airbags (with side and curtain airbags as an option). Also standard is electronic stability control (ESC). This sophisticated system helps to maintain steering control under extreme conditions, such as on wet or slippery roads or when tackling tight corners or making sudden emergency manoeuvres. If the driver exceeds the performance limits for the road conditions, causing the vehicle to oversteer or understeer, the system intervenes by braking one or more wheels so as to maintain stability.

The ESC system includes a number of devices, including emergency brake assist (EBA), which intervenes in case of emergency braking by increasing the braking force; ABS; traction control (TCS), which detects wheel slip under acceleration and intervenes by reducing engine torque; and hill start assist, which maintains brake pressure for approximately two seconds after the driver releases the pedal.

No proof that Russian athletes were complicit in doping, says German lawyer