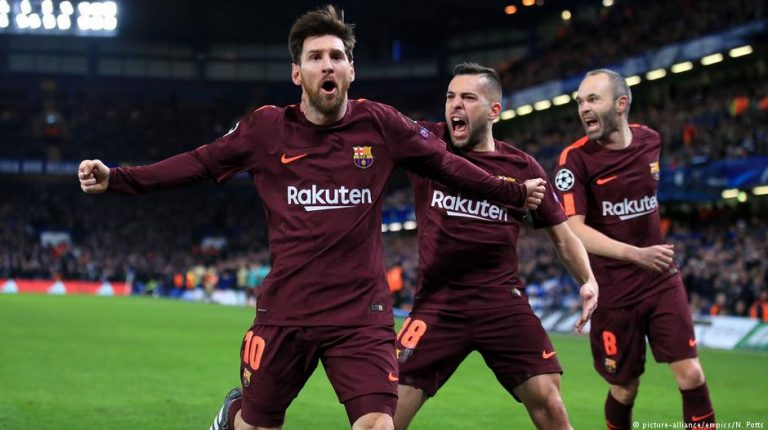 Barcelona will fancy their chances of progressing to the Champions League quarterfinals after Lionel Messi ended his drought against the English champions. The Argentine’s strike canceled out Willian’s opener.Chelsea 1-1 Barcelona
(Willian 62′ — Messi 75′)

It only took him nine attempts and thirty shots, but Lionel Messi is finally off the mark against Chelsea.

The Argentine’s 75th minute goal means the Premier League side will have to score at least once in Barcelona if they are to have any chance of progressing to the last eight in this competition. A feat which is easier said than done, with the Catalans conceding only once in seven Champions League ties this season.

Willian’s curling effort in the 62nd minute gave the home side the advantage, but a Barcelona goal always appeared likely, such is their quality going forward. In the end, it took a wayward Andreas Christensen pass to undo Chelsea’s defensive solidity. As soon as Andres Iniesta latched on to the loose ball, the home side looked doomed. The Barcelona captain teed up Lionel Messi, who cooly slotted home from the edge of the area.

Before this tie, Chelsea coach Antonio Conte claimed his side would need a “perfect game” if they were to progress, and Christensen will be all too aware that his mistake was the difference.

Their game plan before that moment had been working, with Barcelona dominating posession but achieving little with it. Messi cut a frustrating figure as he was routinely hounded off the ball by blue shirts.

Chelsea broke, predominatnly through the tireless Willian, whenever opportunity presented itself. The Brazilian could have scored a hat-trick here, and Chelsea will be kicking themselves that they wouldn’t make more of the chances they created.

Ultimately, however, it is Barcelona who will go away from this game the happier of the two sides.