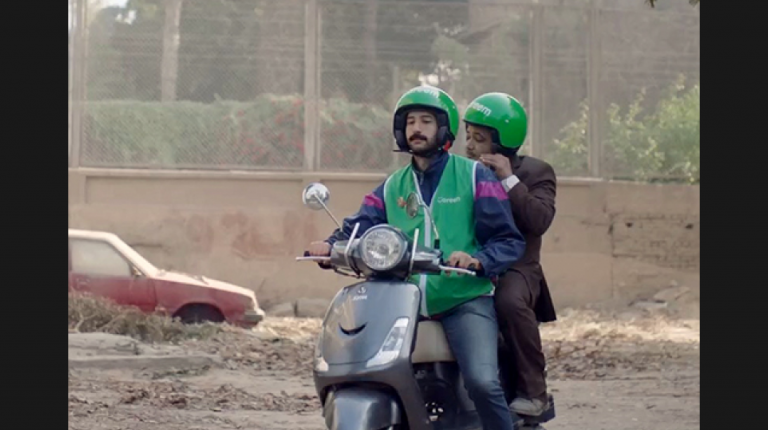 I do not usually like being late, and with Cairo’s crowded streets, I always allow extra time for being stuck in traffic. It usually takes 10-15 minutes to travel from home to work. However, with Egyptians’ constant marathon of seeking to earn their living at the same time I go to work, my journey seems to be a trip that would take hours. I generally prefer taking my car, where I can isolate myself from the crowds, close the windows, and listen to music. Yet, another struggle then hits me: finding a safe place to park my car throughout my long working hours.

Five months ago, Careem applied a new system of offering motorcycles as a way of transportation instead of cars. Excitement took over me reading about the new transportation tool, which I previously used during one of my trips to Thailand, and I imagined myself happily fleeing the crowded streets, not caring about the long lines of cars stuck in gridlock.

I decided to use the application on one of the week days, when my journey would usually take an hour. Opening the application and pinpointing my location, it showed that my driver was 19 minutes away, which is usually more than the time people wait for cars. Nonetheless, my excitement to try the new service made me happily wait.

The pilot arrived sharply on time, on a Chinese scooter. Getting to know him, the extremely polite 42-year-old Hossam started sharing details about his life as I started talking to him. Focusing his eyes on the mobile placed in front of him showing the route, he talked to me about the reasons he decided to join Careem bike.

The warmly smiling driver has a fixed job at one of the governmental institutions in the morning. With a low salary that barely covers his own expenses, and three children enrolled in different education levels, he had to look for an extra source of income to increase his monthly salary.

Hossam, like many other Careem bike drivers, believes that working with Careem is the best solution for those who cannot afford a car, but at the same time have a motorcycle.

He told me that before taking the bike job, he used to be a deliveryman for one of the restaurants. However, the salary was peanuts, and he relied on the tips he got from customers. At the same time, the restaurant did not cover any of the bike’s expenses. Moreover, he had fixed working hours that he could not be late for or miss, or else the EGP 1,600 salary he received would be deducted.

He was also forced to deliver orders fast; otherwise, customers could refuse to accept the order.

On the flipside, Careem provides the best working atmosphere for drivers like Hossam—with no fixed working hours and the ability to work whenever he chooses.

According to him, most of the customers are quite friendly and seeking a fast commute from one place to another during rush hour. He also said that many customers refuse to ride when he arrives, as they were expecting a vespa instead of a Chinese motorcycle.

As for the ride, it can be described as amusing. The one hour drive during rush hour took only 20 minutes; despite that, he never exceeded the speed limit set by Careem, which is 60 kilometres per hour. The price was also much less than on a similar car trip.

Flying between the cars was the best feeling I have had in the streets of the crowded city for a while. It was also the start of bike trips replacing any transportation alternative I have in mind, and I have been using it ever since.

Hossam also said that a lot of women have taken rides with him, and it is totally normal for them.

I highly recommend Careem bike as a means of transportation for those who prefer to commute alone and are not afraid of motorcycles. However, I hope for the number of drivers to increase so that the waiting time is not as long.