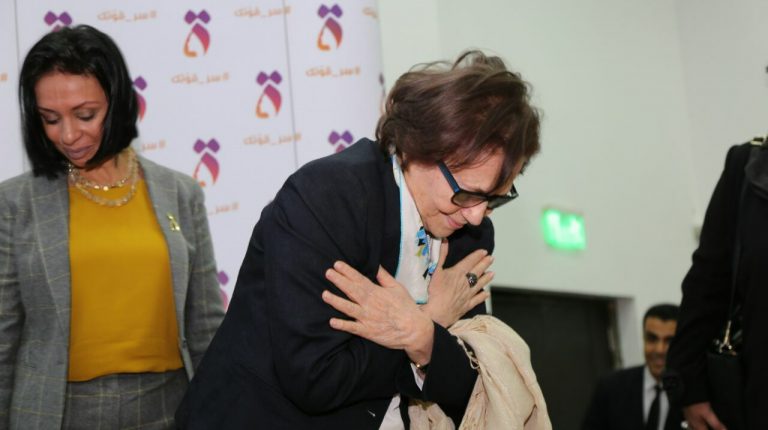 The National Council for Women (NCW) organised a ceremony to honour Algerian activist Djamila Bouherid, on the sidelines of the second session of the Aswan International Women’s Film Festival which she is the guest of honour of.

The festival, organised under the auspices of the NCW in cooperation with the Ministries of Culture and Tourism, kicked off on 20 February and will last until 26 February.

During the ceremony, Maya Morsi, president of the NCW, said that Bouherid has a history of sacrifice, altruism, and patriotism, and when we hear her name, we always invoke the sublime meanings of struggle, sacrifice, and courage.

“This great fighter taught everyone the meaning of redemption; taught us how to sacrifice our lives to redeem the homelands; taught us courage, heroism in the face of the occupier; taught us the value of resistance until the homeland wins,” Morsi said.

She stressed that Bouherid became the eternal symbol of the struggle for freedom, assuring that she has a special place in the hearts of the Egyptian people, who love her.

For her part, Bouherid expressed her great happiness for the amazing welcome she received from the Egyptian people, saying that she felt their love.

She stressed that she did not forget the support and the solidarity of the Egyptian people with the Algerian revolution against the French occupation.

“I cannot forget how late president Gamal Abdel Nasser honoured me when I visited Cairo in 1962 after the success of the Algerian revolution and after my exit from prison,” she continued.

Egypt is honouring Bouherid in recognition of her long history of resistance against French colonisation and the role she played in the Algerian revolution.

Bouherid started her national struggle against the French at a very young age, singing Algeria is our Mother at her French school instead of France is our Mother, which resulted in her getting punished.

She was the first female volunteer to plant bombs on the path of French colonial soldiers.

She was shot in the shoulder and arrested in 1957, and after a long journey of torture in French prisons, she said her famous quote, “I know you will sentence me to death, but do not forget that my death will kill the value of freedom in your country. You will not prevent Algeria from attaining freedom and independence.”