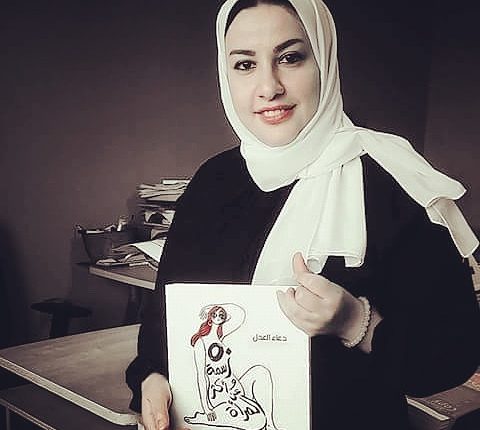 For many years, the field of the caricatures was limited to men, but in the last 11 years, Doaa El Adl proved that women could break the barrier of the male-dominated field, becoming one of the most influential women around the world because of her caricatures, according to the BBC’s selection in 2016.

She has managed to leave her mark among the world’s caricaturists, becoming a fierce competitor in a field where female presence in it is rare.

El Adl was the first caricaturist in the Arab world to create a caricature book that portrays women’s issues. It is named “50 drawings and more about women.”

Daily News Egypt interviewed El Adl to learn more about her journey with caricatures and how she managed to prove herself in the male-dominated field.

In depth, who is Doaa El Adl is and when did your career as a caricaturist start?

I graduated from a faculty of fine arts, department of theatre and cinema décor. Then I worked in interior designing in Damietta, then I moved to Cairo where I worked as a graphic designer. Then in 2007, one of my friends told me that Amr Selim, who was working at that time for El Dostor Newspaper, needs female caricaturists, then my friend showed Selim some of my works and he liked them so I joined El Dostor.

I worked as a caricaturist at El Dostor then I worked at Sabah el Kheir and Rose al-Yūsuf magazines, and finally, I am now working at Al-Masry Al-Youm.

What were the obstacles that you faced at the beginning of your career as a woman?

It was not common for a female to be a caricaturist, so most people were expecting me to leave this career and that I would not continue. Moreover, they told me that I would not be able to continue for more than three years in the field, however, I had the passion and love for what I do and I think that after 11 years, I was able to do something. How do you choose the ideas for your caricatures?

A daily caricaturist should follow all the events that take place in their country, then according to their interests and visions, they choose the idea or the incident that they will work on.

For me, my interests are women and marginalised people, who have no voice in the media, either in local or international issues.

You mentioned your interest in women’s issues. In depth, can you tell us about your book ” 50 drawings and more about women?”

I preferred to make women the heroines of my first book as I have a library of most Arab caricatures and I found that women have no caricature book that focuses on their issues in the Arab world.

In the book I tried to present different aspects of women and their different issues.

We could say that it’s not a book in the traditional sense, but it is closer to an album of caricatures, in which it is divided into three sections. Each one discusses part of the suffering of women from discrimination, sexual harassment, violence, and the crimes against them as well, as the unfair laws that don’t protect women.

What was the message that you want to send through this book?

The message for every woman is to be what she would like to be, not what the society wants her to be.

In your opinion, what are the differences between male and female caricaturists?

In general, in drawing most issues, there is no difference between a male and a female. I think that the power of the idea of a caricature is what makes people follow a particular caricature, regardless of the person who drew it, whether a man or a woman.

But in women’s issues, if the female caricaturist is aware about her role and women’s problems, she will be able to express women’s problems and women’s value better than men. For example, she will draw about sexual harassment or female genital mutilation (FGM) by a different spirit than men, as she feels these problems.

Meanwhile, this doesn’t preclude the fact that there are male caricaturists who draw in defence of women’s rights, which is an amazing transformation that did not exist in previous generations.

How can you evaluate the status of female caricaturists nowadays? Are they successful?

What are the schools of caricature and which type do you prefer?

There are two schools: the first is when the caricaturist doesn’t choose the idea of their caricature, as there is an editorial board that chooses the ideas, such as American caricatures.

The other school is when caricaturists think and implement their ideas. I prefer this school such as the golden generation of caricatures in Egypt that includes Bahgat Osman, Mohy El Din El Labad, El Leithy, Salah Jahin, and George Bahgoury.

Do you think the art of the caricature is currently in decline?

Yes. Journalism in general is in decline. This is reflected in the speed of publishing news, the accuracy of news, and of course, in areas or spaces specialised for caricatures.

In your opinion, what are the reasons for this decline?

Lack of criticism affects journalism in general because there are no different voices.

Caricatures are cynical opinions; they depend on the availability of accurate information, from which artists can form opinions. In the absence of freedom of opinion and accurate information, there will be a decline in caricatures but they will not disappear, as there are still some spaces for artists to express opinions, but these spaces are also decreasing.

Have your caricature drawings been banned from publishing?

Yes, but so few times that I can’t remember them.

You were chosen by the BBC in 2016 as one of the 100 most inspirational and influential women around the world. Tell us about this selection and how you achieved it?

What are the other awards that you received?

I participated in many exhibitions in France, Italy, Spain, and Tunisia. I won a local award from the Journalists Syndicate for best caricature in 2009, then later in 2015, I received the Mustafa and Ali Amin award.

I also won international awards: one for the art of  political satire from Italy, the Mahmoud Khalil award from Lebanon, Geneva Press Club from Switzerland, and many other awards from European countries such as France.

But it’s worth mentioning that the Egyptian awards are the dearest to my heart.

What is your caricature drawing that you most like?

All my drawings, but I remember there was the accident of the Rashid illegal migration boat where many young Egyptians died, so I drew a caricature about this and wrote under it the famous saying of Palestinian author Ghassan Kanafni, “Safeya, do you know what the homeland is?” The homeland is where nothing like this can happen. I found that many people liked it and interacted with it.

What are your aspirations?