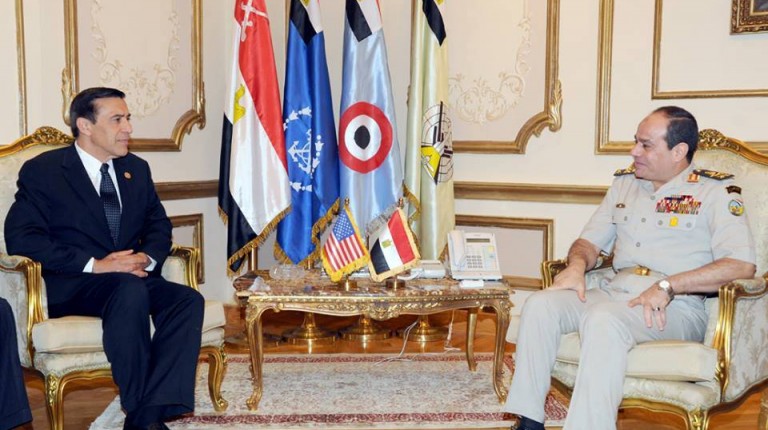 President Abdel Fattah Al-Sisi inaugurated on Sunday a headquarters for military forces east of the Suez Canal in order to take part in preserving Egyptian national security and support the process of development in Sinai, according to military spokesperson Tamer El-Refaie in a statement.

Before Al-Sisi, military chief of staff, Mohamed Farid Hegazy, reviewed the extensive armed operation in Sinai and the achievements of the forces during the past 16 days “in controlling the Sinai Peninsula and cleaning the land from terrorism to allow for the development of Sinai.” He stressed that the operation succeeded in achieving its objectives.

Farid further reviewed threats from different directions and in the depths of Egypt, as well as the preparations and arming of security forces. He pointed out that the extensive operation is being conducted in two phases, including determining strategic targets, preparing and training the military forces on the needed fighting skills to confront terrorism, and coordinating with other security forces and state bodies to provide food supplies and health protection for civilians in central and North Sinai.

Al-Sisi praised the exerted efforts by the military and police forces in defending the nation and defeating terrorism and extremism. He also greeted the spirits of the martyrs who were killed in the fight against terrorism, as well as the people of Sinai for their cooperation with security forces and their understanding of the taken measures in the battle against terrorism, according to the statement.

During Al-Sisi’s tour, the Ministers of Health, Social Solidarity, and Supply and Internal Trade, in addition to the head of the Armed Forces Engineering Authority, reviewed their efforts in facilitating needs and providing services for citizens in Sinai.

Early in February, the Egyptian Armed Forces announced the launching of an extensive military operation in Sinai to eliminate militants from the restive peninsula. The operation aims to target “dens and ammunition storages that are being used by terrorist elements,” according to the statement. The ongoing operation, which is dubbed Sinai 2018, includes navy, air, and infantry forces.

Egypt to launch a new commercial services office in Djibouti