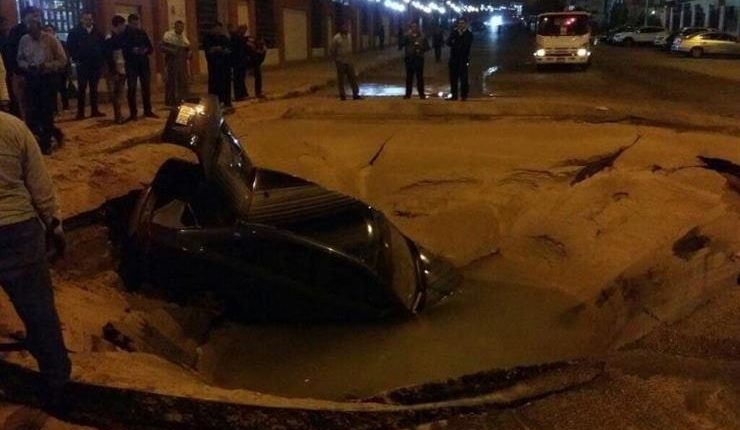 Pictures of a car drowning after a road collapsed in the Fifth Settlement area went viral on social media, causing a widespread wave of anger among users.

The collapse happened on the Fifth Settlement’s main street, 90th Street, due to a large water pipe rupturing beneath the street, which caused the street to structurally fail and subsequently flood with water.

The car’s owner, Haitham, said on privately-owned television programme “Al-Ashera Masa’an” (10:00 pm) that his car was parked while he was at the gym, before he was urgently called to try to save his vehicle.

“I went out to find the car swallowed by the road, with only a small part of it appearing,” he said. “It was completely drowning to the point that I believed it was stolen, as I virtually couldn’t see any part of it.”

The collapse, which took place on one of the main streets in the elite neighbourhood, is not the first to happen lately. A few months ago, another part of the same street, near the current crack, also collapsed, causing severe damages to a car passing over it and the temporary closure of the street.

Bitcoin: Charting the life and times of a cryptocurrency