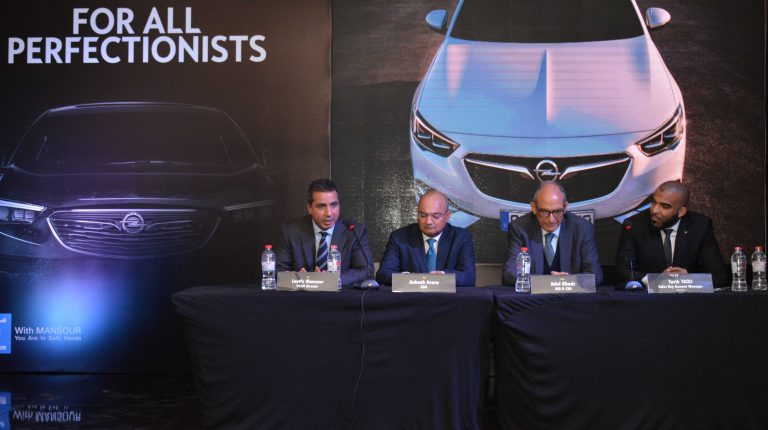 Al-Mansour Automotive, the largest agent of Opel in Africa and the Middle East, unveiled the new version of the 2008 Insignia Grand Sport with German technology and high quality specifications, and then showcased its most advanced features in a modern design.

This comes within the vision of Al-Mansour Automotive Company, part of the Mansour Group, towards the Egyptian market’s ability to provide the latest models of cars that keep pace with the rapid development witnessed by the needs and requirements of Egyptian society’s different age groups and social segments.

“The Insignia Grand Sport 2018 is based on the 1.5-litre turbocharged 165 hp engine with a maximum torque of 250 Nm,” the company said at the launch ceremony.

According to Khedr, the Insignia in its previous form achieved success in the domestic market since its launch in 2013, as it acquired 79% of the market share last year, compared to the same category of competitors.

Khedr said that despite the launch of the new Insignia, the old form is still witnessing buying demand, adding that this year will see the introduction of new models of Opel in the domestic market for the first time.

Lotfi Mansour, head of sales, services, and marketing of cars at Al-Mansour Automotive, said that the company celebrates more than 42 years of being the leader in the Egyptian car market, in which it has been able to provide consumers with a wide range of car lines to suit all tastes.

Al-Mansour Automotive explained that the new Insignia Grand Sport 2018 is unique in its appearance of luxury and elegance.

It has a six-speed automatic transmission, along with 18-inch sports wheels complemented by design elements, such as new front and rear bumpers, a chrome frame on the front air vents and exterior door handles, as well as a rear air diffuser.

The interior of the Insignia Grand Sport 2018 features a sporty steering wheel and seats with many functions, such as cooling, heating, massage, and seat adjustment. The cabin also boasts luxurious leather installations for all customers.

“We are set to continue our development plans in Egypt with confidence in the market’s potential to become one of the most reliable markets in the region,” said Lotfi Mansour.

Amr El Shafei, marketing manager for Opel at Al-Mansour Automotive, announced the price of the car. The car is offered in three categories, starting at EGP 529,900 for the elegance category, EGP 579,900 for the highline category, and EGP 649,900 for the topline.

Opel announced the unveiling of the new version of its iconic Insignia Grand Sport 2018 at the International Motor Show Germany in Frankfurt last year, while previous models have achieved significant sales in the Egyptian market.

Over the past four years, Opel has attracted the admiration of many individuals who prefer to drive a German-made car.

Prices of 23 cars increase in October