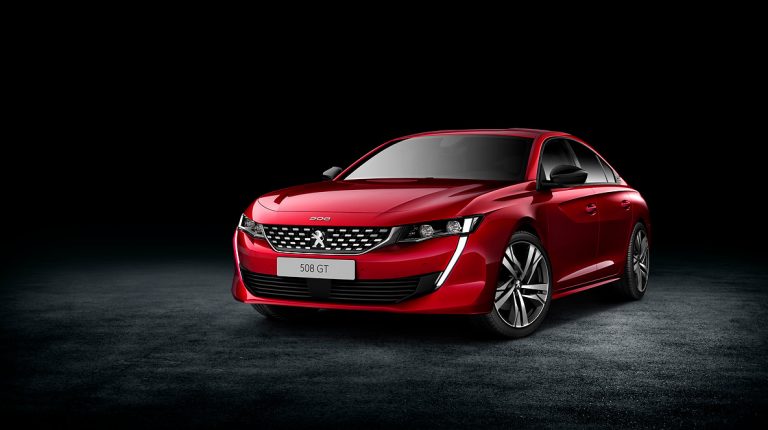 French automaker Peugeot has unveiled the new generation of its iconic sedan 508. The company revealed new features, showcasing a luxury and new vision in terms of the interiors’ design, as well as the exterior, ahead of officially unveiling the car to the public at the Geneva Motor Show to be held in Switzerland in March.

The exterior of Peugeot has changed from a traditional four-door design to a five-door coupe, reflecting the German vision of the French company’s designs expected to be clearly seen in the upcoming period after the launch of the new five-door Insignia, which appears to be a challenge for the Germans.

The car also has a front fascia with a completely new net of silver chrome-plated pieces, featuring the identity of the new Peugeot, along with an elegant LED design, and a sports bumper with large black ventilation vents.

As for the sides, they come with black mirrors and prominent wheels. Sharp lines are clear on the four doors of the car. Windows come with a black frame. The rear of the car has a distinctive modern design with attractive lights, in addition to two exhausts made of chrome on each side.

In terms of performance, the new 508 has two options for gasoline engines. The first is a 1600cc engine that generates 177 horsepower (hp), and the second 1600cc engine brings a 217 hp version of the GT. The two engines rely on an eight-speed automatic transmission.

The French manufacturer reduced the weight of this car by 70 kilograms compared to the previous generation.

The new generation of the stylish i-Cockpit design from Peugeot includes a screen with LED touch lights, a rectangular console design, and a very distinctive steering wheel and gear stick.

After the official unveiling of the car at the Geneva Motor Show in March, the car will be available in international markets in September. The company’s agent in Egypt has not published any details about the availability date of the car in the market.

Peugeot’s former agent in Egypt said that the sales of Peugeot in the Egyptian market have increased by 4,000% in less than three years, giving the new agent a great opportunity to invest in Peugeot.