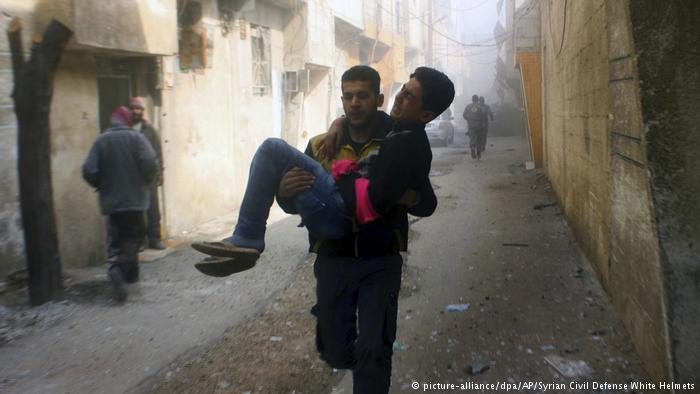 Civilians may now exit one of Syria’s last rebel strongholds under a temporary ceasefire ordered by Russian President Vladimir Putin. The United Nations has urged warring parties to allow aid into devastated areas.

Eastern Ghouta near Damascus was relatively calm on Tuesday morning after a Russian-backed ceasefire entered into force at 9:00 am local time.

The Russian president had on Monday ordered a daily “humanitarian pause” to airstrikes in eastern Ghouta, according to Russian news agencies.

The ceasefire comes amid calls from the international community to implement a nationwide cessation of hostilities as the humanitarian situation worsens on the ground. The five-hour cessation of hostilities will end at 2:00 pm, according to the order. The ceasefire is aimed at establishing a “humanitarian corridor” to allow civilians to exit eastern Ghouta, considered one of Syria’s last rebel strongholds. In agreement with the Syrian regime, the Russian Defence Ministry said it will help evacuate the sick and injured.

Over the past week, more than 500 civilians have been killed by the Syrian government’s latest offensive in eastern Ghouta. Russian warplanes formed an integral part of the offensive, according to independent monitors, rights groups, and US authorities.