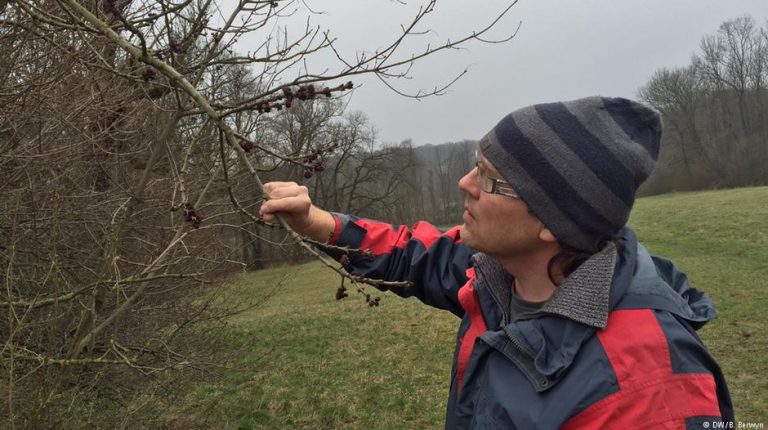 A fungus spreading rapidly east to west across Europe is wiping out valuable forests. Scientists are racing to plant and multiply resistant strains before the species disappears.Like many previous generations of cabinet-makers in south-central Austria, Christian Hinterschweiger uses the wood of ash trees in his trade. The trees are native to the rugged limestone Alps of Styria, and the wood is valued for being highly shock-resistant.

It’s great for making furniture, musical instruments and tool handles, and perfect for sports gear like the custom skis Hinterschweiger builds in his Bad Mitterndorf workshop.

He started making them in 2011, and they are all built around a core of ash wood, sandwich-style, beefed up with layers of Kevlar or metal.

At his workshop, skis in various stages of production lie lined up along the wall, including several pairs with custom logos that celebrate birthdays. After cracking open a cold beer, Hinterschweiger describes why he uses ash.

“It responds really well to heating and bending, and it has the right combination of strength and flexibility,” he tells DW as he places a thin piece of the fine-grained wood into his ski press.

“Using wood is sustainable — and for skiing, where it’s about being in touch with nature, it’s perfect,” he adds. “A ski with a wood core is responsive. You can feel that it’s made from natural material.”

Business is booming at the local ski area, considered to be at least a temporary oasis from global warming because of its location in a snow-catching range, and Hinterschweiger says he’s been able to turn his ski-making passion into a successful part-time business, and is considering expansion.

But his example of sustainable local economic growth depends on a sustainable supply of resources — and due to an invasive fungus spreading across Austria, experts say more than 90 percent of the country’s ash trees will disappear from natural forests and plantations within the next 20 years.

Nobody knows exactly why the fungus, which has been found in many European countries including the United Kingdom and Ireland, started to spread.

During a walk through a Vienna, forest researcher Thomas Kirisits told DW there are no clear indications that the fast advance is directly linked to global warming, like some other rapidly spreading invasive species.

That doesn’t mean future research won’t find a link — but for now, efforts are focused on rescuing the species, he said.

Stopping along the Schwarzenbergallee, he pointed to a stand of ash trees where, in 2007, he was among the first to identify the tree-killing fungus, which sprouts small, white cup-shaped mushroom caps in the summer on fallen branches.

Once the exact species was known, scientists traced the origins of the spread back 20 years, to Poland, where related species of ash trees are resistant to the fungus.

“There are still more questions than answers, and there isn’t time to find them all,” said Kirisits, who is one of the leaders of an effort to rescue the trees from oblivion by finding at least a few strains that are more resistant to the fungus.

For the past few years he’s been part of a team trying to propagate more resilient ash trees.

“We have to act now,” Kirisits added.

If they succeed, the forest scientists and managers could be able to restock woodlands in the decades ahead.

Other treatment options, like trying to kill the fungus, are limited because the organism is highly productive; its spores easily spread far and wide by wind.

Kirisits estimates that across Europe, only about 1 to 3 percent of ash trees have a genetic resistance to the fungus. Even that may be optimistic, because trees that appear to survive one year may the next year fall prey to the fungus.

In some of the hardest-hit areas, including in Denmark, researchers estimate that the fungus has already killed more than 90 percent of the ash trees.

Over the past decade, it has spread west across France to Ireland and northwestern Spain; south across most of the Balkans and nearly to the foot of Italy’s boot; as well as throughout the Benelux lowlands; and into the Baltic republics and the southern fringe of Scandinavia.

Hence the need for careful experimentation, including genetic research, as a basis for a recovery effort.

To gather genetically diverse specimens, Kirisits and other researchers have also enlisted the public, who were asked to report locations of single living trees in devastated bosque and riparian forests along the Danube.

That’s because every now and then, in the brown-gray fuzz of a dying forest, there are small clumps of trees that are seemingly oblivious to the surrounding decay.

In the last few years, Austrian researchers have set up two nurseries where they are now growing and tracking thousands of seedlings, in a series of age groups, grown from seed and cuttings.

Kirisits said there are 23,399 ash seedlings that will be tested for resistance this year. Similar efforts are under way in a few other European countries.

Some are deliberately exposed to the fungal pathogen, and the resistant strains are paired up to produce more seeds.

It could take 15-20 years of continued hard work before enough seedlings are available to restore forests on a meaningful scale. Regardless, the effort could sustain the species in the long run.

This approach is being used in efforts around the globe to make forests more resilient to environmental change, whether that be global warming or the spread of unexpected pathogens.

Diana Six, a forest researcher in Montana in the United States states, has been studying the genetics of trees that survived the onslaught of pine beetles that killed millions of acres of lodgepole pines across western North America in the early 2000s.

The Austrian approach to ash rescue and restoration could also be used to make forests in her region, and around the world, more resistant to rising invasive pathogens, she said.

“To make forests more resilient, we have to be open to radical ways of thinking,” Six told DW. “Boosting forests’ genetic abilities for adaptation is the best way to better cope with insects or fungi that may spread with global warming.”

Mapping genetic markers for resistance to pathogens can support the natural process of evolution by enabling foresters to breed and plant trees that will survive bugs and other pests, she concluded.