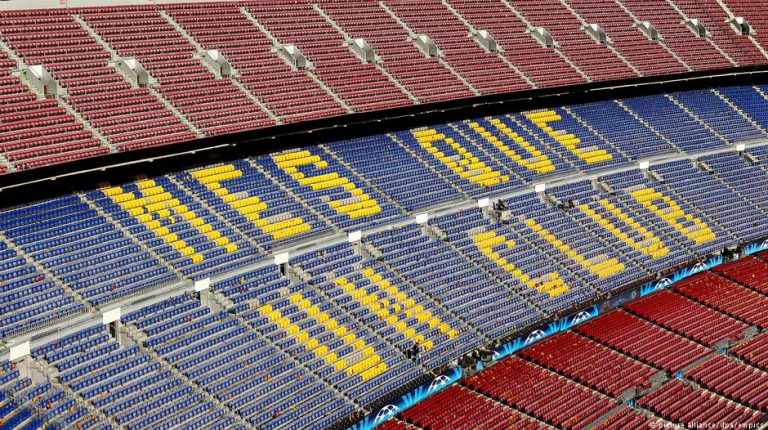 In pursuit of Catalonia’s independence, there is a lot of expectation on Barcelona’s football club. Nevertheless, many are critical of the biggest club in the region getting so involved the political world.Even if the club says otherwise, Barcelona hasn’t always been a Catalan club. In 1899, the club was founded by Swiss Hans Gramper for foreigners living in Barcelona. Espanyol, a team also from Barcelona, had different beginnings — they were a club of the Catalan aristocracy from the start.

Read more — Opinion: After Catalan elections, it’s back to the drawing board

The politicization of the Catalan community — a movement that started at the end of the 19th century and intensified dramatically during Franco’s dictatorship — also had an impact on football, in Trias de Bes’ eyes.

“Since then, Espanyol has become the ‘Spanish working class club’ in the eyes of the separatists, and Barcelona the flagship of the Catalan bourgeoisie,” he says.

Santiago Galardi believes politics and sport have always gone hand in hand in Catalonia. The Madrid businessman, who runs a famous nationwide flower decorating company with his partner, grew up in Catalonia. “As early as 1902, a Catalan national team was formed for just that reason; it still exists today but is not recognized by anyone internationally,” Galardi says.

Today, FC Barcelona is a kind of leading ambassador for the region, and as a result many supporters of Catalan independence expect the club to take a clear position on the issue. Officially, the club has made it clear it favors the right to self-determination for Catalonia’s population, but is reticent to go any further on its specific view on Catalan independence. “In 2012, we defended the Catalan language, then the [public’s] right to self-determination in 2014, and then the independence referendum on October 1, 2017,” an official club statement says. The chairman wanted to cancel the game against Las Palmas on October 1, in protest at Spanish police’s at times violent attempts to prevent people from voting in the referendum, which had been declared illegal by Spain’s courts.

“There were of course safety reasons that spoke against playing the game,” believes German-Spaniard Alejandro Stranz, recruitment consultant based in Barcelona and an expert on the economic and political situation of the club. But the Spanish football association decided otherwise. Barca had to play, even on that historic day.

“Albeit in front of an empty stadium,” Barcelona’s President Josep Maria Bartomeu said, “so that the world can see how we’re suffering under the absence of democracy here in Catalonia.”

The power struggle between Catalonia and Spain that spans decades is reflected in the massive rivalry between Barcelona and Real Madrid, says former Espanyol basketball player Luis Fernandez Matamoros. “Hearing Barca’s slogan, ‘Mes que un Klub’ (‘More than a club’), in this current political tangle verges on cynicism,” he says.

A few weeks ago, a story in Spanish newspaper El Mundo caused a stir when it was reported that separatists begged the club to contribute €3.5 million as a bail payment for the former regional president Artur Mas. Mas is one of several Catalan leaders facing further court cases and possible jail time, in his case for his involvement in organizing 2014’s plebiscite on whether Catalonia should become an independent state. According to claims made in El Mundo, Barcelona’s Bartomeu flatly rejected the proposal — the club has said nothing further in public.

It all started with Laporta

According to Fernandez Matamoros, the politicization of the club really took off when Joan Laporta became its president in 2003. Pep Guardiola, who took over as head coach in 2008, not only led Barca to unprecedented success on the pitch, but he also supported Laporta’s political line of increasingly disassociating the club, a symbol of Catalonia, from the rest of Spain. After leaving his position at the club, Laporta even established his own unsuccessful separatist party.

In the run-up to the referendum last year, the former director of Barca’s Masia academy, Julio Alberto, sharply criticized the political radicalization of the club, which was the reason for him leaving his post in 2014.

“Very good Barca training camps in the rest of the country were suddenly abandoned for political reasons and out of protest against Spain,” Alberto told the Spanish television program Espejo Publico.

Alberto also criticized the fact that last autumn, more and more political pamphlets and independence flags were visible inside the Camp Nou — rather than any tributes to the people who died in forest fires in Galicia in Spain’s northwest at that time.

However, so far this flirtation with the separatist movement has done little to damage the club. According to Barca officials, the club’s financial situation and the level of membership remain stable.

Some Barcelona fans, who don’t live in Catalonia, such as 50-year-old Madrid resident Cesar Martinez, find it disturbing when they see Barca players suddenly speaking about politics in interviews, or when the media ask whether players from Catalonia should be dropped from the national team.

Just after the referendum defender Gerard Pique was booed and insulted at a national team training session, after he had come out in support of independence.

“It’s a dangerous development,” said Martinez, who grew up in Barcelona but now operates a restaurant in the Spanish capital. “Many people in Madrid now boycott everything from Catalonia, including sports.”

Jürgen Donges, professor emeritus of political economics and the University of Cologne, who also grew up in Barcelona, has also had enough of all of the politics that now envelops the Camp Nou.

“Barca should play football. But if the bosses at FC are so gung-ho about independence, then they should pull the club out of the Primera Division and the Copa del Rey,” he said. “But these gentlemen don’t have enough self respect. This is something that they have in common with the separatists, who continue to accept money from the Spanish state they so hate.”