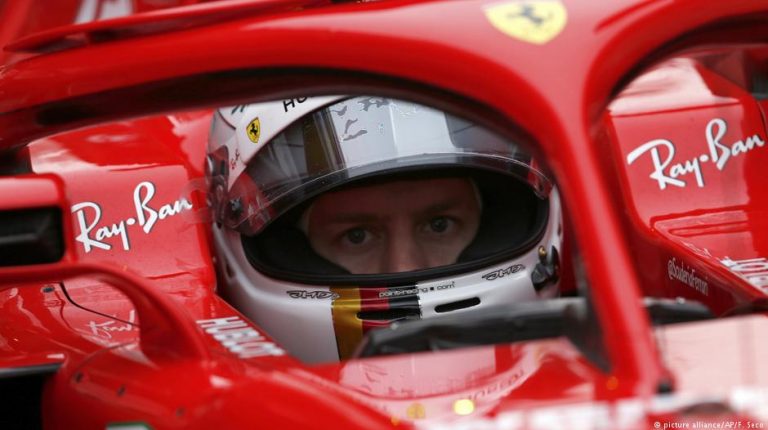 Sebastian Vettel took his 2018 challenger for a spin, setting the fastest lap of the second day of testing ahead of the new season. The weather remained anything but ideal, with snow falling for a second straight day.Two chilly days of testing in Barcelona even brought sporadic snowfall to Spain. Few if any of 2018’s races will take place in temperatures near freezing point, and most teams waited for the worst of the morning’s chill to lift before taking to the track. Still, F1’s 10 teams have been able to put down several hours of pre-season running in their new 2018 cars.

Ferrari’s Sebastian Vettel was the quickest driver on the second day’s testing on Tuesday, just 3 tenths of a second quicker than Valtteri Bottas in a Mercedes. On Monday, reigning champion Lewis Hamilton set the benchmark laptime, suggesting that the two rivals might spend another season fighting towards the front of the field.

“In terms of general operation everything is really smooth,” Vettel told reporters at the Circuit de Catalunya track near Barcelona. “So it is good to come here and switch on the car and be able to run. Obviously the limiting factor was the weather. I think the next two days won’t be much better, but I hope next week will be.”

The teams are in Spain for a fortnight for two extended test sessions, their only on-track preparation before the season-opener in Melbourne on Sunday March 25.

Mercedes’ Bottas similarly cautioned against reading too much into lap times, saying “the tires are just not made for these conditions,” but said Mercedes were able to make the most out of the day. To maximize their on-track running time, Mercedes canceled plans to swap drivers — bringing in Hamilton — at lunch time, instead letting Bottas run a full day. Like most teams, Mercedes only have one fully functional car at this point, meaning the drivers have to share. Teams will be preparing their second cars back in the factories while their test teams are on location.

Arguably the other surprise story of Tuesday’s testing was the pace of Stoffel Vandoorne in the McLaren, now using Renault engines after three unsuccessful seasons with Honda. Reliability problems meant that Vandoorne, like teammate Fernando Alonso on Monday, couldn’t pound out as many laps as his rivals. However, the Belgian set the third-fastest lap of the day, suggesting McLaren’s fortunes might change with a new power unit in 2018.

However, Vandoorne’s time was set on a softer and faster compound of tire than Red Bull’s Max Verstappen used on Friday. Verstappen, also using Renault engines, was fourth fastest on the day and right on Vandoorne’s heels.

In a welcome return to the F1 paddock, Robert Kubica lapped the track in his new role as Williams test driver. Kubica, once considered a potential future world champion, sustained life-threatening injuries, especially to his arm, in a rally crash in February of 2011. At one point, it appeared highly unlikely he’d ever race an F1 car again. The Pole, now aged 33, even lapped quicker than Williams’ race driver, Sergei Sirotkin, during his stint in the car on Tuesday.