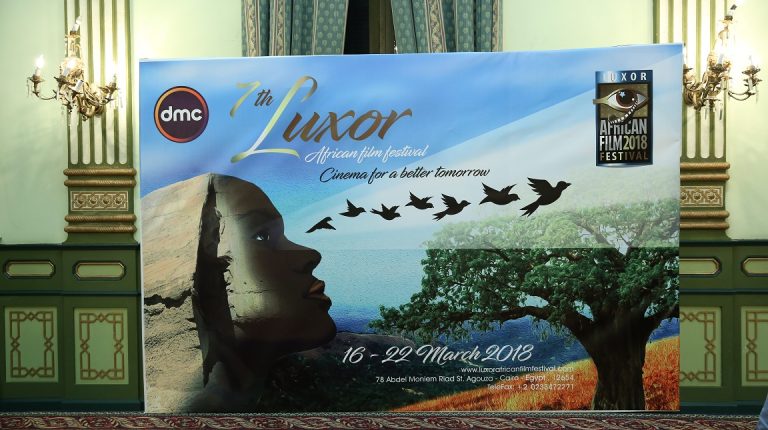 The Luxor African Film Festival is an annual celebration of films, art, and criticism, while keeping a close eye on African cinema and its different contemporary issues. The festival has been building up momentum to reach out to different artists and filmmakers from the African continent, to bridge the gap between Arabic-speaking African countries and other nations deep in the continent.

The festival, through its six previous editions, has been aiming to gather artists in order to share the knowledge and the passion of cinema.

The guest country of the festival is Rwanda, and the events of the edition will witness the attendance of several diplomats from different African countries.

The honourary president of this edition will be Egyptian screenwriter, song writer, and doctor Medhat Al-Adl, who wrote a collection of songs for a number of famous singers such as Amr Diab, Mohamed Fouad, Mohamed Mounir, and Samira Said, among others. In 1992, he had his very successful debut in the film industry when he wrote the songs for Ice Cream in Gleem starring Amr Diab and directed by Khairy Beshara. He collaborated with Beshara again in the 1990s on four other films, including “Esharet Moroor” (Traffic Light) and America Shika Bika in 1998. He had a second breakthrough in his writing career with “Saidi fl Gamea Al Amrikiya” (An Upper Egyptian at the American University), which achieved unprecedented success and record-breaking revenues at the Egyptian box office. He then wrote scripts for several commercially successful films such as Hammam in Amsterdam; Short, T-shirt, and Cap; Mafia; and others. In the field of television dramas, he wrote several successful series such as Mahmoud El Masry, Al-Andaleeb, and “Harit Al Yahood” (Jewish Alley).

In the main competition, there are 10 long feature films from all over the African continent:

A couple, Boi and Atswei, is living in Puna and bent on delivering their first baby in their hometown Akete. They miss the train, which is the only means of transportation from the outskirts to the town. Due to the haste, they take a wrong decision and find themselves in the middle of nowhere.

Ady, a 13-year-old boy, no longer listens to his father who is raising him alone. The latter, running out of resources, decides to entrust Ady to his uncle Amadou for the summer. Uncle Amadou and his family live on the other side of the Mediterranean Sea, in Burkina Faso. There, at 13, one must become a man, but Ady understands things differently.

José is a retired military man of the Spanish Air Force who took part in the Rif War and participated in the bombardment and the usage of toxic mustard gas which was dropped by planes on civilians. Sixty years later, he decided to go back where the “crime” had taken place. There, he discovers a part of the population which was affected by cancers and the lifeless landscape of desolation.

Twenty years ago, the young ‘Five Fingers’ fought against brutal police oppression for the safekeeping of the rural town of Marseilles. Now, after fleeing in disgrace, freedom-fighter-turned-‘outlaw’ Tau returns to Marseilles, seeking only a peaceful pastoral life. When he finds the town under new threat, he must reluctantly fight to free it.

A young graduate who battles everything, including love, family, discrimination, drug abuse, culture, and tradition, on his journey to self-discovery and actualisation.

The Runaway directed by Mwangi Eric Mania from Kenya

Out of poverty, Emma’s mother gives up her daughter to a wealthy man who promises a brighter future for her child. Nevertheless, the girl ends up as a sex slave working under the dangerous cartel.

After the death of her estranged father, Fatima makes an unlikely friend at a hospital, Maria. Bound by pain, Fatima keeps coming back to hear Maria’s tale of the T-junction where she found love and loss in a ragtag community.

In the contemporary Kigali neighbourhood lives Denise, a calm and conservative housewife and mother. As she is bearing her husband’s emotional and physical abuses because they cannot have a second child, Steve, a Tanzanian charming youngster settles next door and falls for her beauty. Denise embarks on a journey that might cost her seven-year-old marriage.

Benzine by Sarra Abidi from Tunisia

Salem and Halima have no news of their son, Ahmed, who has left illegally for Italy. For months, there has been no word from him. They live in agony. Conflicting stories circulate concerning the fate of their only son.

The Originals by Marwan Hamed from Egypt

Samir is a father who provides for his family by working at a bank. When they start laying off employees, he loses his job and tries to find a new one. One day, he finds his bank account with a zero balance, which was caused by debts that go way back. Later, he finds a box outside his doorstep. In the box, he finds a phone that unlocks with his fingerprint. After unlocking the phone, he finds footage of his past on it, before receiving a phone call that would change his life forever.

Meet the jury of the feature film competition

The festival will also include several workshops and exhibitions. The main filmmaking workshop will be held by director Khair Beshara, executive director Sherif Amasha, and director of photography Mahmoud Lofti.

Beshara joined the Egyptian Higher Institute of Cinema where he graduated in 1967. He then travelled to Warsaw, where he started his career with a focus on documentaries then moved to feature narratives and directed 12 long features that were screened at various international film festivals, and lately has been directing various TV series. He is one of the first Egyptian and Arab directors to venture into digital filmmaking in the late 1990s. In a recent book, published by Bibliotheca Alexandrina in 2007 about the most important 100 films in the history of Egyptian cinema, three of his movies were listed: The Collar and the Bracelet; Bitter Day, Sweet Day; and Ice Cream in Gleem.

Lofti is an Egyptian cinematographer who was born in Cairo. He studied cinematography at the Higher Institute of Cinema. His debut feature film was Heliopolis. He shot a number of award-winning short and feature films, documentaries, and TV series directed by a variety of renowned filmmakers, including Mohamed Khan, Hala Lotfi, Basel Ramsis, and Dina Hamza. He taught cinematography and lighting at Jesuit Cinema School of Cairo from 2008 until 2016, during which he also shot a number of short films directed by Jesuit alumni and young independent filmmakers, as well as video art projects by several visual artists including Moataz Nasr El Din.

Amasha is a producer and filmmaker born in Cairo. He finished his studies in commerce at Ain Shams University in 1998 before he joined the Higher Institute of Cinema to study filmmaking, which he graduated from in 2005. He wrote and directed his first short film, Service, in 2001, then he worked as a director, producer, and assistant director on several other short films, documentaries, and TV series. Since 2011, he has worked as an associate professor and instructor at the Higher Institute of Cinema.

Continuing an ongoing tradition of the festival is publishing and translating books that are specialised in African and Arab cinema, with the hope of transferring the knowledge and experiences of critics, artists, and journalists to readers in different languages. In past years, several publications were released tackling the lives and art of late director Mohamed Khan and actors Taheyya Kariokka, Khaed Saleh, and others. This year, three books will be published. The first will be La Diversité du Documentaire de Création en Afrique, written by Francois Fronty, and Delphe Kifouani, translated by Madiha Hegazy. The second will be Samir Farid: Le Critique et le Modèle by Amal El Gamal, translated by Madiha Hegazy. The third is Slavery, Freedom and Migration Cinema in West Africa by Farouk Abdel Khalek.