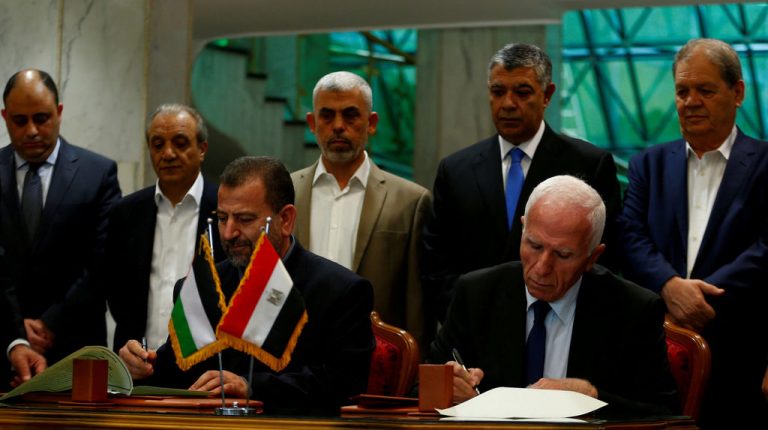 An Egyptian delegation arrived on Sunday 25 February to Gaza, in an effort to bring closer together Fatah and Hamas. Through an Egyptian mediation effort, the two Palestinian factions had signed an agreement on 12 October 2017 in Cairo, committing themselves to carrying out, in letter and spirit, a previous reconciliation accord reached back in May 2011.

The Egyptian delegation would meet with various ministers and high officials from the government of national accord that represents the Palestinian National Authority in Ramallah. The purpose is to help the two Palestinian parties get over their disagreements as to how to proceed against a backdrop of deep distrust among the officials of both. Add to that the interference of outside third parties who have their own agendas to defend in inter-Palestinian politics. Maybe it was a sheer coincidence that the arrival of the Egyptian delegation coincided with the presence of a Qatari diplomat who openly blamed, unabashedly, Egypt and the Palestinian Authority for the plight of the Palestinians in the Gaza Strip. Or that Hamas is playing a risky game of playing an Arab country against another, and Arab countries against regional powers, namely Turkey and Iran.

The Egyptian delegation flew to Gaza after a Hamas delegation had held discussions with officials from the Egyptian General Intelligence Directorate for the last two weeks. According to Hamas sources, the discussions were constructive and fruitful. In these talks, the Hamas delegation was quite open to accelerating the reconciliation efforts, however, it stressed the necessity for the Palestinian Authority to rescind measures that it had adopted vis-a-vis Hamas, for example, not shouldering the cost of electricity provided by Israel to Gaza. Another serious problem is the rehiring of 42,000 employees appointed by Hamas to the civil administration in the strip.

According to United Nations officials, the humanitarian situation in Gaza has deteriorated to a degree that the strip is on the verge of a complete collapse. The United Nations is striving to raise €500m to meet the basic needs of Palestinians in the Gaza Strip, in refugee camps, and in the West Bank. Of course, the American decision to cut off financial aid to the Palestinian Authority, on the one hand, and to the United Nations Relief and Works Organisation (UNRWA), on the other hand, has contributed to the worsening of the humanitarian situation of the Palestinian people everywhere.

Egyptian officials tried to arrange for a meeting between Hamas and representatives of Fatah while the Hamas delegation was still in Cairo, but the latter laid down some conditions for such a meeting to take place. One of the conditions was related to the complete takeover of all ministries in Gaza by the Palestinian government of national accord. Hamas said it would be ready to oblige. Hopefully, the official takeover of the ministries in Gaza would take place while the Egyptian delegation is still there. Such a step would be a breakthrough, a much needed one at that, to convey an unmistakable message to the Gazans, and the Palestinian people in general, that the Palestinian national reconciliation would become an irrefutable reality on the ground. Surely this is what Moussa Abou Marzouk, the Hamas official in charge of the reconciliation process, had in mind when he emphasised that the Palestinian people should not lose hope in the ultimate success of the ongoing reconciliation efforts and for “national unity.”

It goes without saying that a Palestinian national unity government has become an absolute necessity, not only to alleviate the disastrous humanitarian situation of Palestinians, particularly in the Gaza Strip, but also to be in a stronger position to deal with the expected American peace proposals that Ambassador Nikki Haley, the US permanent representative to the United Nations in New York, referred to in her appearance before the Institute of Politics of the University of Chicago last Thursday (22 February). She did not give details, but said the Palestinians and the Israelis will not like it nor hate it.

The Palestinians, united under one political authority, should be ready to talk peace when the time comes.

Hussein Haridy is a former assistant to the foreign minister