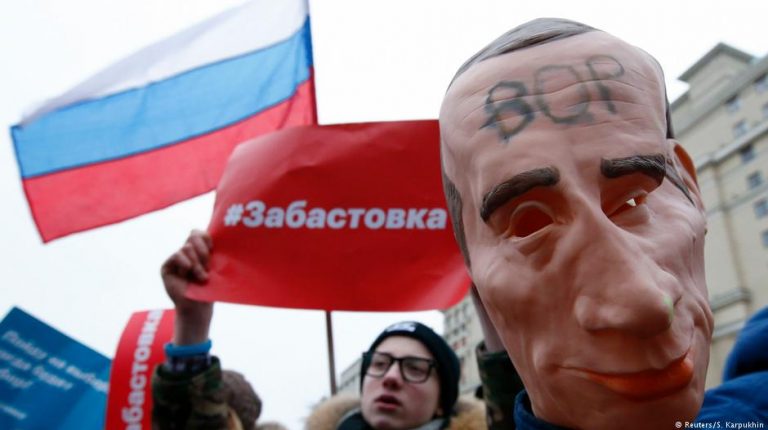 It could easily pass for a satire on the Russian capital, but his daily experiences there also provide insight into the anti-Putin movement of the 2010s — he befriended for instance the members of Pussy Riot, only to be later disillusioned by the divided opposition movement, and briefly embraced the Putin elite instead.

Born in Latvia (then part of the Soviet Union), as a teenager Idov moved to the US, where he became a three-time National Magazine award-winning journalist. His first novel, “Ground Up” (2009), caught the eye of the Russian GQ staff, who nominated Michael Idov writer of the year, catapulting him into the Russian media spotlight. The GQ appointment quickly followed.

DW discussed “Dressed Up for a Riot” with the author, who’s now based in Berlin.

DW: When you set out to write this book, did you ever think people might not believe half of the stuff that occurred was true? From duel-like face slaps outside of the Bolshoi Theater to your assistant tweeting that you were still at the office, looking pathetic, while also dissing your shoes — and this on your first day of work as editor-in-chief: Did you ever find yourself saying “my life is stranger than fiction; how can this translate to a memoir”?

Michael Idov: Not really; to be honest, the above examples are pretty mild when it comes to living in Russia. This is, after all, a country where a member of Pussy Riot, after two years in prison for dancing in a church, can start dating an Orthodox terrorist who calls in bomb threats to “satanic” rock concerts…

The bulk of the book is firmly based on the diary I’ve kept my first year in Moscow — which, in retrospect, turned out to be perhaps the best decision I had made that year. The only liberty I took with the material was very occasionally conflating the events of two or three days into one.

In the end, I used every anecdote that fit the overall arc of my Moscow years — my infatuation and disillusionment with first the opposition and then the “hip” Putinist elite — and cutting out everything that didn’t fit. Of course, this act of selection might itself be the book’s biggest lie, because I’ve ended up imposing a tidy narrative on something as chaotic and messy as life.

Did you ever think that your efforts to instill a new style of journalism — a more rigorous and factual one — at GQ Russia would be met with so much resistance? How much of it do you chalk up to cultural differences, state influence, or simply bad habits that are hard to change, especially as a newbie and outsider?

Well, I’d been warned by Russian colleagues that this wouldn’t be easy — and, in retrospect, I was definitely too cocky about my ability to change things. I ended up doing much better with GQ’s website, whose audience I increased tenfold, than with the magazine itself, whose circulation fell about 20 percent on my watch.

Almost none of my problems had to do with state censorship, though, or dearth of journalistic talent. Russia has fantastic journalists, with many of whom I was lucky enough to work. I did fail to grasp how uninterested in the surrounding reality GQ Russia’s core audience was; they would literally buy the magazine to forget they’re in Russia. And there I was, reminding them.

There’s always an aspirational quality to any fashion publication, and of course, GQ is no exception… You were not only expected to create an aspirational lifestyle for readers, but also fabricate an illusion of the current reality — which seems to be the current attitude of Moscow and Russia at large. Your friend and author Peter Pomerantsev describes this well in his book, “Nothing is True and Everything is Possible” (2015). Did you ever consult with him leading up to the publication of your book?

No, but we certainly compared notes over a beer or two.

How would you characterize the current opposition movement, and how has it evolved from the first riot you got pulled into to now?

The 2011-2012 protests were fascinating because they were essentially leaderless; any attempts to put a face on that movement, through various headquarters and committees, were kind of ad hoc and awkward. Over the last five years, that situation changed completely.

The “authentic” Russian opposition has become almost entirely synonymous with Alexei Navalny. Navalny sets the agenda, directs the conversation, issues calls for rallies, etc. It’s debatable how this happened, but the main reason is brutally simple: Navalny is not lazy. Out of all the stars of the erstwhile White Ribbon movement, he’s the only one who’s been consistently putting in the work.

In your book, you mention resisting your college professor’s advice to write about your “immigrant experience.” Would you say that the anecdotes about your parents keeping a picture of Lenin in their refrigerator to your flashbacks of coming of age in America to going back to Moscow as an established, award-winning American writer — as opposed to a Russian or Latvian journalist with a GQ Russia writer of the year award — is in some way your own way of chronicling how that experience has shaped you as a writer and subtly influenced your time as GQ Russian editor?

You got me! That bit in the first chapter is essentially me throwing up my hands and saying “fine, here’s your touchy-feely immigrant story.” And then, for the rest of the book, I position myself as an American who miraculously knows Russian, as opposed to what I actually am (a Jewish guy from Latvia who grew up on Russian literature and music), but both the reader and myself are, at that point, aware that I clearly protest too much. The truth is that I feel much more affinity with that ridiculous place that I let on.